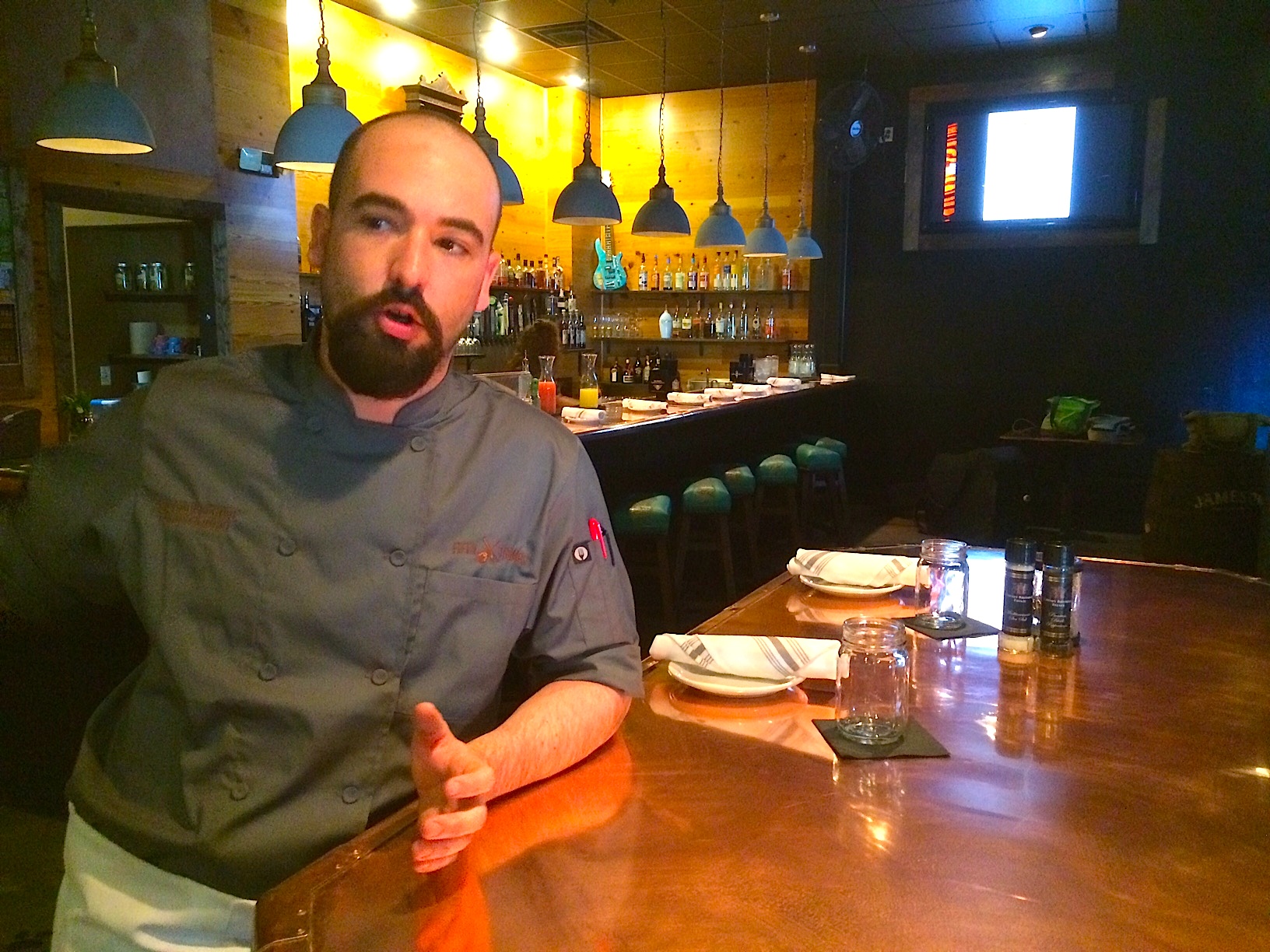 Fifth & Thomas, a new Midtown establishment featuring food and music, is hitting the right notes on both counts. 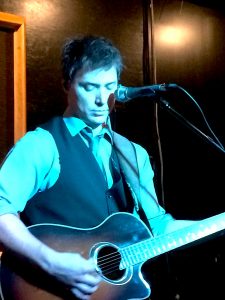 charcuterie. Another evening, the jazzy Adam Hendley Trio serenaded as we sipped an “Old Floridian Fashioned” cocktail and supped on Andouille-crusted catfish.

Fifth & Thomas, which has roots as a music venue called Fifth Avenue Tap Room, was reopened by owner-operator Shannon Moore (who also owns the adjacent Finnegan’s Wake) in mid-May, refurbished to serve both sounds and sustenance. The music enhances rather than overpowers the dining experience, and the combo attracts a crowd 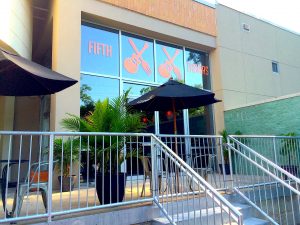 that spans generations. The place is open Thursday through Saturday nights for dinner and for Sunday brunch.

The setting
Black walls in this spacious restaurant/bar/concert stage are a backdrop for tables brightened with fresh flowers and candles. Check out the cleverly upholstered stools, special-made in Texas. Those tables arrayed 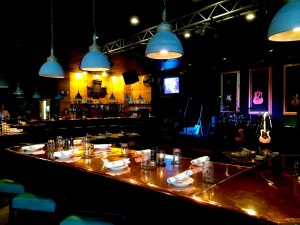 around the stage have the best line of sight, those in a corner or on the outside patio are quieter.

The chef
Talented executive chef Ryan Goreau starting working in the restaurant business at Albert’s Provence (now A La Provence) when he was a 15-year-old student at Leon High School. 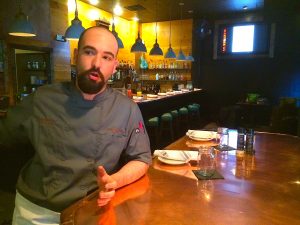 and worked at some of Tallahassee’s most popular restaurants. He cooked at Kool Beanz Cafe and served as a sous chef both at Cypress and Sage.

Before Sage, Goreau did a stint as a chef for David Copperfield at the illusionist’s private island, Musha Cay in the southern Bahamas. He cooked for various celebrities who rented the property and even catered the wedding of actors Penelope Cruz and Javier Bardem. As for Copperfield, he liked “medium-well burgers and French fries with ketchup,” Goreau said.

At Fifth & Thomas, Goreau brings his skills to a largely Southern menu, with influences from New Orleans to Charleston, taking advantage of locally-grown ingredients.

Dig in
Your F&T meal starts with three mini house-made biscuits served with a terrific tomato jam and butter on the side. The jam jolts your senses, pleasantly, with a sweet-tart tang. The biscuits crumble and melt in your mouth.

Goreau uses farm produce, such as figs, garlic, herbs and other local ingredients when possible in his fare. His sources include Full Earth Farm, Sycamore Gardens and Owen River Farm.

Goreau’s elaborate charcouterie, served on a rustic slice of tree trunk, included three meat choices — felino, known as the “king of salami;” guanciale, dry-cured pork jowl; and bresaola, Northern Italian cured beef — plus deviled eggs (topped with a touch of chimichurri), fig and tomato jams, tomme cheese from Sweet Grass Dairy, and pickled peppers and okra. It’s all good, though my husband and I would have  swapped a few of the pickled items for another bit of that cheese.

We loved an appetizer special of cacio e pepe, literally “cheese and 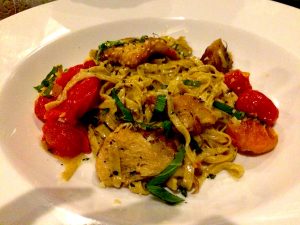 pepper.” Yellow tomatillos and Sweet 100 cherry tomatoes brighten a creamy tangle of house-made, pepper-spiked pasta lightly coated with a buttery cheese sauce. Maybe most intriguing is the addition of lion’s mane mushrooms, which come from the small Tallahassee urban farm called Play of Sunlight Mushrooms. This fungi is also known as a bearded tooth, for the way it looks hanging on a tree. Cooked, these delicious slices are hearty and earthy, almost like meat.

Gumbo lovers are mighty particular, tending to have their preset notions about what the concoction should taste like. Goreau’s starts 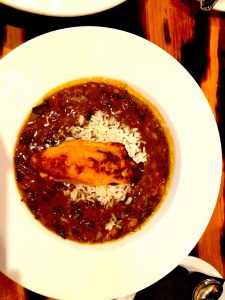 with a requisite deep, dark roux, has some Andouille sausage but, instead of okra, collard greens. I thought it was too salty; my husband, who ate the whole bowl, disagreed. I’ll switch to the New Orleans barbecued shrimp next time for a taste of the Big Easy.

An entree of Andouille-crusted catfish was excellent,  the topping adding a nice crunch for the perfectly cooked fish. A flavorful remoulade spiked with celery and crawfish tails was a bonus. The sides were also winners: a mound of cheese grits baked in a mold like a flan, so it’s lighter than you’d expect, plus a healthy dollop of 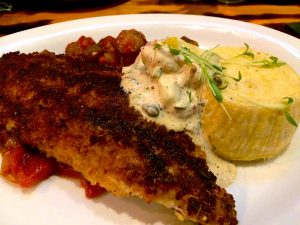 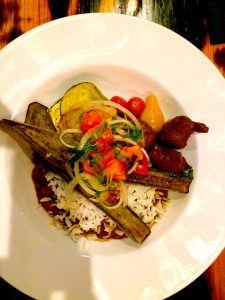 Our dessert of peach cobbler was a taste of summer, the cream cheese ice cream a delightful cool contrast to the warm peaches, which were flavored with a fragrant spice blend. Wow!

At Sunday brunch, we loved the Creole eggs Benedict and mushroom leek and brie omelet. 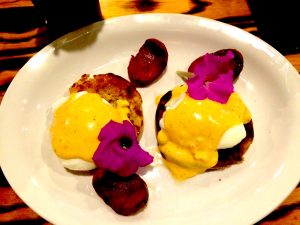 The Bloody Mary was over the top, garnished with homemade pickles, poached shrimp and bacon-wrapped jalapeños. You might need a nap afterward.

The service
Fifth & Thomas exudes a friendly vibe, from the cheerful hostess to the efficient, welcoming and knowledgeable servers. Water glasses are kept topped off, dirty dishes cleared quickly and the check was delivered without delay or rush. 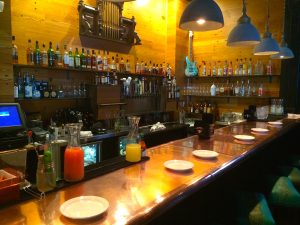 wines by the glass or bottle, champagne and a passel of Southern-themed cocktails.

Bottom lineFifth & Thomas is a fun and welcome addition to Tallahassee’s burgeoning foodie scene, with creative dishes, a sharp staff and the bonus of live music. We’re ready for an encore.

Our rating
Worth the Drive