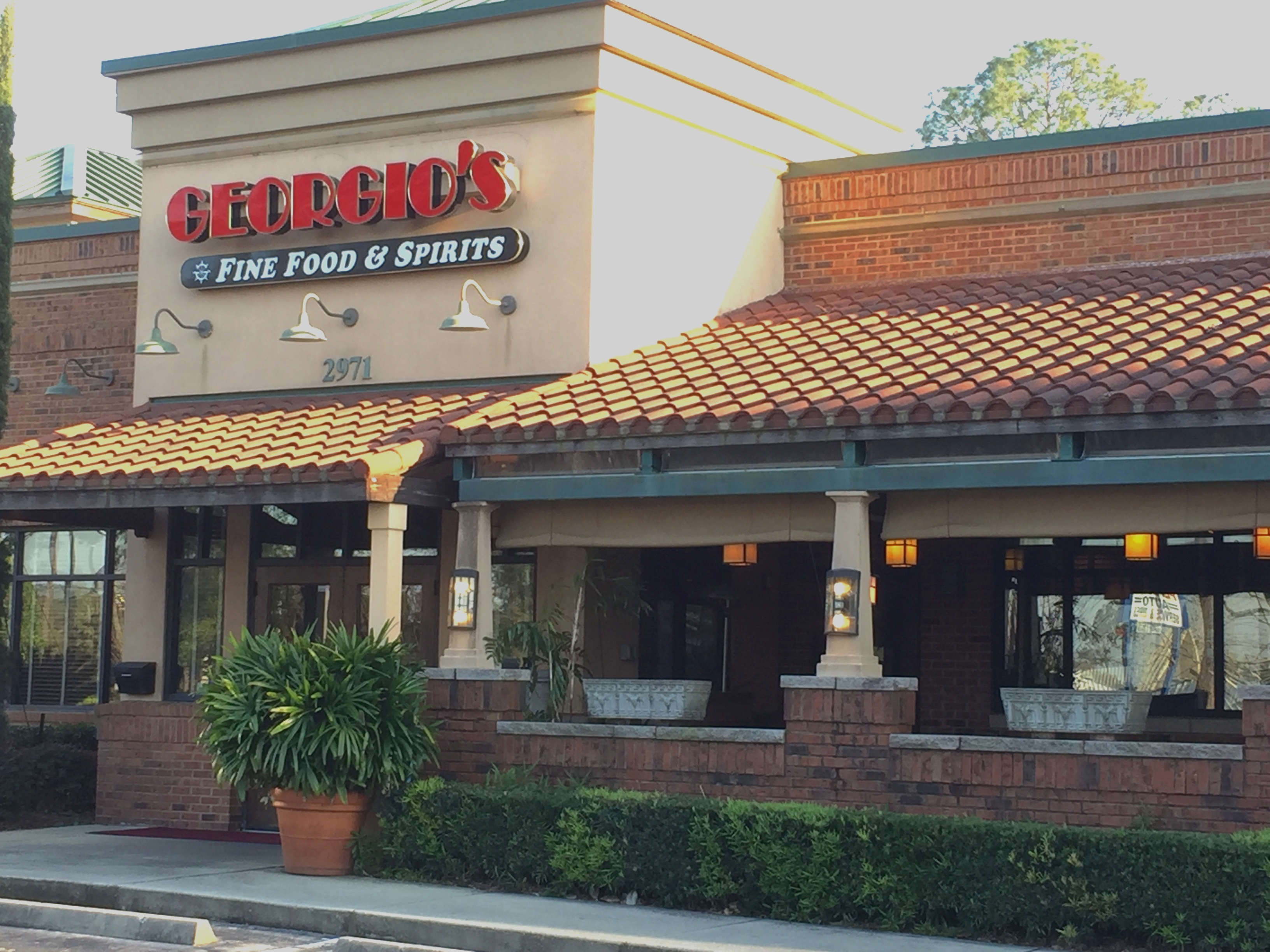 With so many new restaurants popping up in Tallahassee, it’s easy to overlook the city’s dining institutions. But there are plenty of venerable, tried-and-true choices still worth their turn in the spotlight. Georgio’s Fine Food & Spirits on Apalachee Parkway is one of them.

Its continued appeal is largely due to the man at the helm — owner  Georgio Koikos, who has been in the restaurant business 50 years. When you’ve been successful this long, you have to be doing 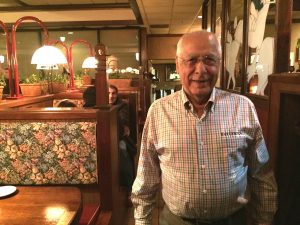 something right. And Koikos, 82, has been doing many things right since he left his home in Athens, Greece in 1966 and came to Tallahassee.

If Koikos is in the house, and he usually is, expect him to visit your table during your meal to say hello. You might say that Georgio’s has an “old-school” approach to fine dining, with a focus on quality, exemplary service and attention to detail. The restaurant “stays true to its roots,” said Leni Spears, the general manager and Georgio’s daughter.

The setting
When Koikos got to Tallahassee in the mid-60s, he worked at his brother JImmy’s restaurant. Within a few years, he opened his own place, Spartan Restaurant & Caucus Rooms, at the Duval Hotel. Some might also remember the Brothers Three, owned by Georgio and siblings Jimmy and Pete.

Koikos opened Georgio’s in the Carriage Gate shopping center on Thomasville Road in 1994, but closed it in 2013. In the meantime, Georgio and wife Karen Koikos had opened a second restaurant called Torreya Grill on Apalachee Parkway in 2002. The name was later changed to Georgio’s, too.

On a recent visit to the restaurant, our party of eight was seated in one of the restaurant’s two semi-private rooms, a comfortable space that lent itself to easy conversation. Georgio’s also has two private rooms and a covered veranda. The main dining room is filled with large, intimate booths.

Some might term the decor at the Apalachee location as comfortable, if dated, with flowered upholstery cushions, dark wood interior and black-and-white photos. But you’ll find fans who wouldn’t change a thing.

Dig In
Just about everything at Georgio’s is made in-house, from dressings to desserts. Chef Grant Beane has been preparing steaks, seafood, Mediterranean and Greek classics for more than 20 years. Italian baker Steve Cucinella makes the bread. No shortcuts, Spears said.

The extensive menu covers a lot of territory, much of it melding Gulf seafood with Greek flavors. So many tempting dishes, starting with choices like escargot, stone crab claws (in season) grouper cheeks or Greek-style tenderloin tips.

For a bit of theater, we ordered an appetizer of saganaki from the list of chef’s specials. Kasseri cheese was flambéed at the table with a 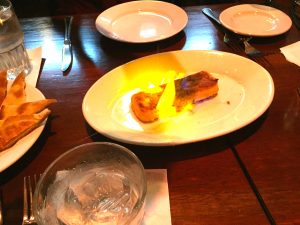 splash of brandy, sparking the requisite oohs and aahs. A squirt of lemon juice extinguises the flame and adds a bright citrusy flavor. The warm cheese is then easy to slather over the accompanying grilled pita.

We also shared a generous Greek platter with eggplant moussaka, spanakopita (spinach pie) and dolmathes — ground beef, rice and spices wrapped in grape leaves and finished with a lemony sauce. It was all served with a Greek salad, rice and carrots.

Entrees come with soup or a house salad. My traditional Greek avgolemono soup, an egg-based rendition, was rich and creamy with chicken and a bit of lime — homey. You can pay an extra $3 and upgrade to a specialty soup like a seafood bouillabaisse.

We did pay $3 for a salad upgrade. Our refreshing array of greens 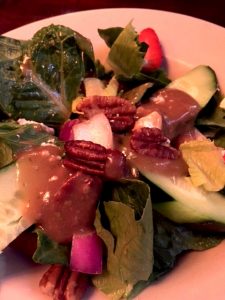 was topped with roasted pecans, sliced strawberries, cucumber and feta, drizzled with a perky balsamic vinaigrette.

Georgio’s is known for its seafood, like black grouper prepared Greek style with lots of olive oil and lemon, or snapper garnished with jumbo shrimp and a cilantro lime sauce.

Fishermen rave that fried grouper throats are a delicacy, one I’ve never had, so they were a 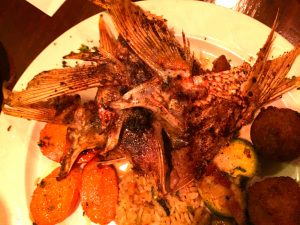 must-try at Georgio’s. You have to work a little to dig out the meat but it was rich and juicy. Snapper throats are also available. The dishes come with golden brown hush puppies, Brussels sprouts, rice and carrots.

Georgio’s also specializes in hand-cut steaks and lamb, both winners at our table. The New York strip was grilled perfectly to medium 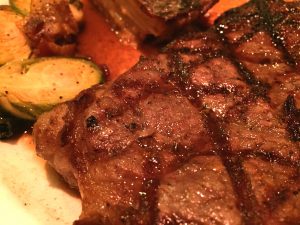 If you’re looking for a lighter, less-expensive dish, try a pita topped with beef tips, chicken or, our choice, a generous amount of fried shrimp, light and crisp, festooned with lettuce, tomato, feta and tzatziki sauce.

Desserts include sinfully rich orange chocolate torte (with grand marnier), baklava cheesecake, with layers of the airy puff pastry, lots of pecans and cinnamon and a special of frozen Bavarian chocolate 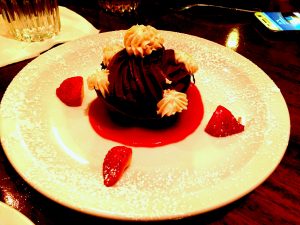 mousse with mascarpone Greek yogurt cream, served in a hard chocolate bowl and with a garnish of strawberry coulis. A sweet ending indeed.

Bar
There’s a lengthy wine and beer list but we decided on cocktails, including a delightful gin blossom and a summery strawberry 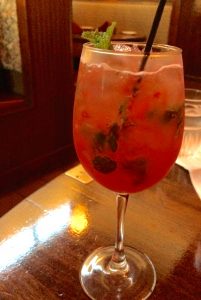 Sangria, one of the best we’ve had, brimming with fresh mint grown at the restaurant.

Service
Excellent. Commitment is a trait Georgio has passed on to his daughter, Leni .Our server,Torrey, clearly knew his stuff, easily managing our party of eight with efficiency and charm. If he didn’t know something he found out.

Bottom Line
Georgio’s is often considered a special-occasion restaurant. It’s not cheap, but it does offer special qualities — and generous portions — if you want a fine meal with excellent service.

Tallahassee Table Rating
Worth a Drive

Lunchtime Trolley on a Roll