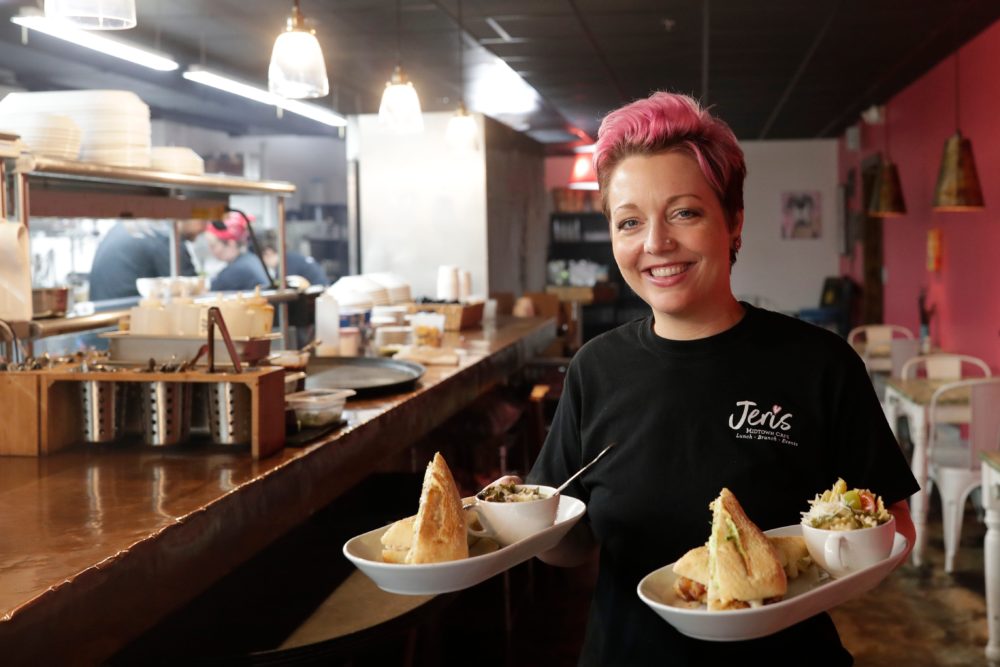 I’m sure that many of you, like me, were upset when Paisley Cafe shut its doors this summer. Afterall, the popular restaurant was sweet and cozy, a place to savor friendship and good food.

But rest assured it remains all those things — and more. In August, Jeri Bradley Madden, who became managing partner at Paisley during its last year, decided to take a big step and make it her own venue, calling it Jeri’s Midtown Cafe.

It wasn’t an easy task. In less than three weeks, Jeri had to get permits, spruce up the decor, and even more importantly, incorporate her vision into the new setting while keeping the spirit of Paisley, and the dishes customers had come to love.

After visiting Jeri’s Midtown Cafe a few times, I can say she’s certainly aced the transition.

“I wanted to keep the legacy going on,” said Jeri. “We kept everybody’s favorite dishes but jazzed up the menu a bit.”

Another plus: “The staff all stayed with me,” she said. It’s a factor that helped the restaurant maintain its friendly atmosphere and familiarity.

The paisley motif may be gone but it’s been replaced by vibrant hues, fanciful artwork and folksy touches. The slogan is “Love on a Plate,” which you’ll see emblazoned in white script on the turquoise wall in the open dining room. When the weather cooperates, you’ll still want to dine in the lovely outdoor courtyard, surrounded by lots of greenery and bright colors.

About Jeri
While she may be at the helm of a new space, Jeri’s no stranger to the hospitality business.

She started working as a server at age 16 at Shoney’s Restaurant in Clewiston. “I’m an old Outbacker,” she said of a later job working at Outback Steakhouse in Tallahassee.

Jeri later earned a bachelor of science degree in hospitality management from Florida State University, was an assistant general manager at The Red Elephant and catering and events manager at Doubletree by Hilton.

Jeri attended culinary school at Keiser University but she prefers working the front of the house. You’re likely to meet her on your visits here — she aims to stop by each table to say hello, making even newcomers feel at home.

While she isn’t spending time behind the stove, Jeri has influenced many of the changes in the menu, adding her own “spin” as well as more gluten-free and vegan options.

While you’re deciding on your meal, enjoy a complimentary serving of homemade pimento cheese, which my Southern-born husband was happy to find, and crackers.

Jeri’s doesn’t use fryers and everything is either roasted, sautéed or broiled, fresh cut, sliced and diced. The kitchen touts its from-scratch emphasis and specialties like house-roasted chicken and veggies, homemade Nutella bread pudding and fresh petite blueberry muffins.

You can order a vegan spread in lieu of whipped mayonnaise and there are vegan choices like the Righteous Rice Bowl (also available with chicken, shrimp and roasted vegetables) as well as vegan versions of several sandwiches.

The pressed sandwiches come with a choice of a side, chips or a cup of soup. Our favorite sandwiches include The “TAB” with sliced roasted turkey, apple butter and Il de France brie on a Tribeca Demi baguette; The Dude,” with prime rib roasted in-house and pesto; and Abigail, a “grown-up” grilled cheese. Matt’s Monster Sandwich (pictured) is another popular choice.

The soups are terrific, and will be irresistible when the weather cools. Parmesan and a basil chiffonade accent the tomato bisque. The lobster bisque is another gem, one you’ll want to sip slowly and savor. Both are served with sliced baguettes.

My husband and I have also been here for breakfast and there are so many tempting choices.

The Kenny Benny brings three poached eggs garnished with smoked Smithfield bacon and Roma tomatoes atop sliced Sister Schubert yeast rolls, topped with a housemade Hollandaise sauce and served with a side of fresh fruit.

The Benny is named after Jeri’s husband Kenny, who she said is the first customer every Sunday. He gets the Benedict, and then French toast for dessert. “It’s his Sunday Funday.”

We also devoured the shrimp and (Gouda) grits, an ultra rich, delicious dish with perfectly cooked shrimp and a Cajun-style cream sauce, served at brunch and lunch.

Desserts include the excellent homemade nutella bread pudding (the only one I’ve tried so far), plus mini coconut cakes, Key lime tarts and cupcakes from Lucy & Leo’s (located next door above Midtown Reader).

I’m a fan of the slightly tart, slightly sweet Very Berry Lemonade and Island Splash Lemonade with fresh fruit, served in mason jars (with an extra small carafe on the side). I also like their sweet iced coffee. These drinks are big enough that I usually get a go-cup to finish them later.

The restaurant offers full service instead of counter service, a practice Jeri started at Paisley. As it turns out, Sergio has been my waiter every time I’ve been to Jeri’s. He’s excellent, efficient and sweet.

Here’s a treat. Jeri has added a small plates menu and happy hour from 4:30 to 8 p.m. Tuesday to Friday. I’m looking forward to sitting in the garden as fall finally kicks in, munching on tapas and sipping wine in the garden.

You’ll still find a lot about what made Paisley special at Jeri’s Midtown Cafe, but it does add her creative touch, warmth and of course, there’s all that delicious food.

Spear It IS A WINNER