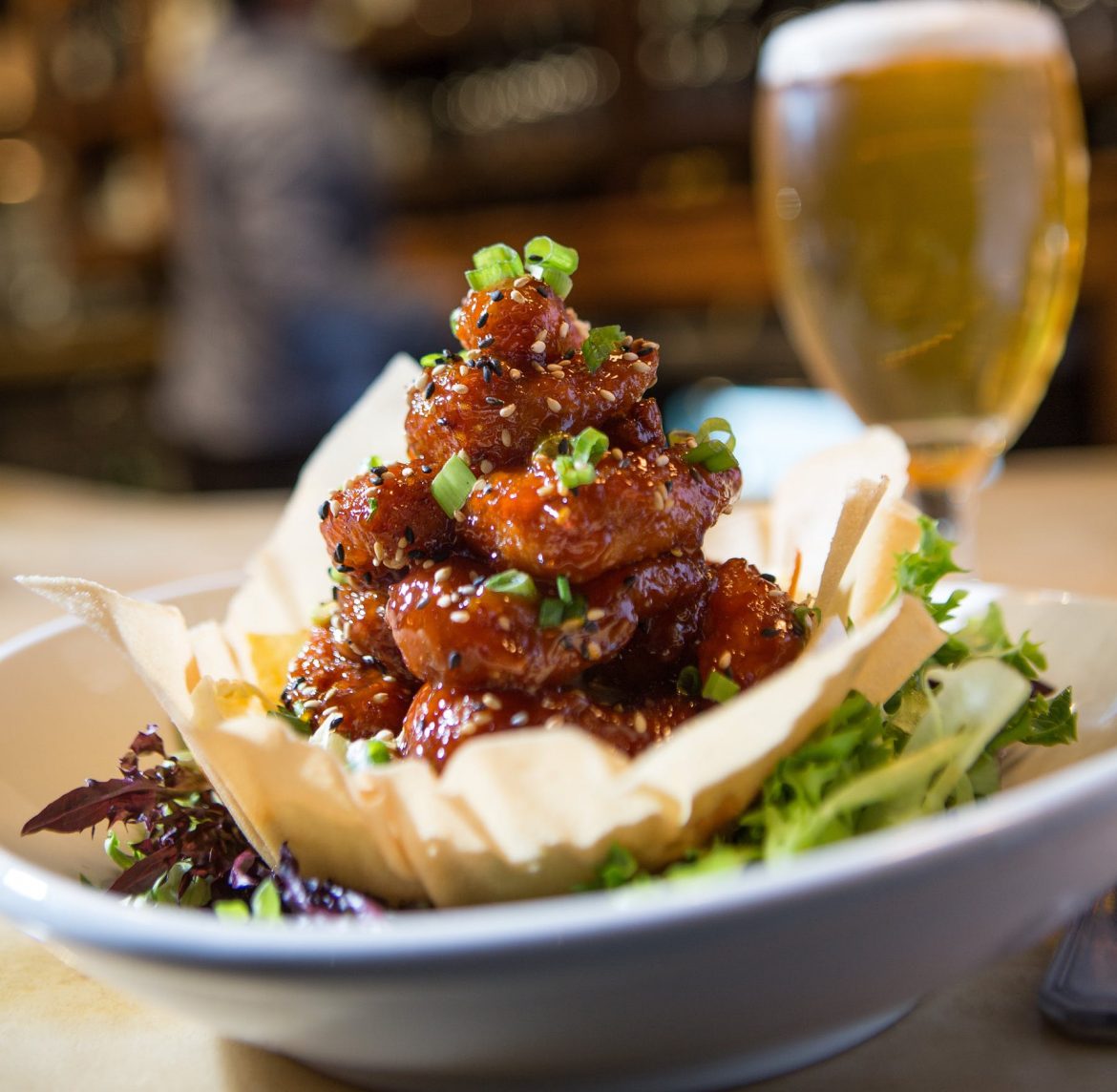 I’m sure plenty of people were scratching their heads when they heard about Chuck’s Fish coming to College Avenue.

The downtown location hasn’t exactly been kind to its most recent inhabitants. And some curmudgeons were sniping that Tallahasseans wouldn’t pay for quality fish. Then, the pandemic hit. Surely, the owners would give up.

Despite all the challenges, Chuck’s made its debut in August — and we’re hooked.

My husband and I have ordered takeout twice from Chuck’s, most recently with friends, and the food has been exemplary. We’ve enjoyed fresh red snapper and black grouper, crunchy spring rolls and elegant sushi and sashimi.

The restaurant has a backstory fitting a fisherman’s tale.

Charles got a masters degree in American studies, but without a clear career path pursued his lifelong love of fishing. He ran a private fishing boat then went on to start his own seafood market, Harbor Docks in Destin, 40 years ago.

In 2005, Morgan and his team decided to open a restaurant to showcase the stellar seafood from the Gulf of Mexico. A year later Chuck’s Fish opened in downtown Tuscaloosa, Alabama. Restaurants followed in Birmingham and Mobile and Athens, Ga.

All the restaurants receive regular shipments of fresh fish from Harbor Docks, and it shows.

“There’s absolutely no way I’d run a seafood restaurant if we didn’t own our own wholesale market,” said Charles, who even lends a hand driving fish from Destin to Tallahassee.

“Seafood is one of the trickiest industries there is.”

“Of the seafood consumed in the United States, more than 90 percent is imported,” said Charles, referring to reports from the nonprofit group Oceana. It’s common knowledge that a good portion of fish are mislabeled.

All the more reason to be able to trust a local seafood market. “Tallahassee is lucky to have Southern Seafood,” said Charles. His restaurant gets shrimp, crab and some other items from Southern Seafood. Its fresh fish comes from its own boats or the dozens that contract with Harbor Docks.

As for another part of the restaurant’s rich history, it’s named for Charles Morgan Jr. a Birmingham-based lawyer who gained national prominence following the bombing of his hometown’s 16th Street Baptist Church in 1963 that killed four girls.

Morgan spoke out against racism the day after the bombing and was then shunned for it. Due to threats, the family moved to Atlanta, the younger Charles said. His father became an acclaimed civil rights lawyer who represented Julian Bond and Muhammad Ali and tried nine cases before the U.S. Supreme Court.

At the restaurant named in honor of him, there’s a sense of purpose beyond the restaurant. At all its locations, Chuck’s operates nonprofit food trucks called American Lunch that bring free meals to hard-hit communities. During the pandemic they’ve been serving hundreds of meals. “No questions asked,” said Charles. They are in the process of determining where to set up in Tallahassee.

Dig in
Chuck’s menu offers a lot of choices but it’s not a hefty tome, which is a good thing. The focus is on fish but there are a few salads plus chicken and steak.

Chuck’s features the fish of the day prepared either grilled, blackened or sautéed. We’ve had both the sautéed red snapper and blacked black grouper and they were both terrific. Fresh-from-the-sea taste, perfectly seasoned, moist and delectable.

Our friend’s order of blackened fish came with a roasted corn relish, asparagus and homey gouda grit cake. My sautéed snapper was lightly breaded and paired with artichoke hearts and a perfectly cooked risotto.

The Gulf fish “parmandine” is rich and plentiful, topped with crab meat, Parmesan and toasted almonds though the distinctive flavor of the black grouper shines through. It’s served with a gouda grit cake, asparagus and a wedge of lemon.

Chuck’s sushi bar is managed by chef Yoshie Eddings, who has established sushi bars at Chuck’s four restaurants, and now at Tallahassee’s location.

“Our secret weapon, and it’s not very secret, is Yoshie,” who has catered for celebrities like Tom Hanks, Sharon Stone and Richard Gere, said Charles. “She pretty much brought sushi to the Southeast (U.S.) almost 30 years ago. It sounds like an outrageous statement but it’s true. She‘s from a sushi restaurant family in Tokyo. She knows her stuff.”

My husband ordered sushi for takeout on both his visits and he raved about the generous rolls — succulent and balanced. The Destin is packed with tuna, avocado, green onion and the Spicy Shrimp has cucumber pieces and green onions.

The sashimi appetizer, chef’s assortment, is a colorful array. It’s presented with care, even in a takeout box, filled with lovely slices of raw fish: salmon, hamachi, yellowtail and tuna, nestled amid sliced cucumbers and slivers of carrots.

The restaurant uses local tuna for sushi but gets yellowtail and other ingredients for sushi from the Pacific.

Chicken or steak are also good options. My entree of chicken scaloppine was wonderful, with a lightly breaded crust, and a medley of spinach, gnocchi, mushrooms and tomatoes in a lush lemon caper cream.

For dessert, we devoured white chocolate bread pudding. There’s also a blondie sundae but seems like that would be better eaten on premises.

A shout-out to Chuck’s for using disposable packaging and not Syrofoam.

The decor is casual but classy, with accents of wood and blue hues. The bar features whimsical portraits of the Beatles and the outdoor deck has been spruced up with planters, couches and expansive umbrellas.

Even with a quiet opening, Chuck’s has attracted a steady clientele spaced out for social distancing.

“I think the people in Tallahassee must have thought there are idiots opening a restaurant now,” said Charles.

Chuck’s Fish originally planned to open in January but due to the pandemic, work was stalled. With all the restrictions, the launch was postponed until Aug. 24.

Despite the delays, the owners were undeterred.

“I have two boys and I’ve always told them — ‘Put one foot in front of the other and take really big breaths,’ said Charles.

If our experiences are any indication, I’d say it’s time to exhale.

The seafood restaurant is open for dining in or curbside takeout. Dinner hours are 5 to 10 p.m. Monday to Thursday, 5 to 11 p.m. Friday and Saturday with happy hour from 4 to 6 p.m. on Monday to Friday (bar and sushi available).

Celebrate Valentine’s Day — dining in or at home

Geoffrey Zakarian the star chef at TCC’s Cleaver and Cork

The food looks and sounds like it is delicious (exception is the sushi). If they do delivery, in addition to takeout, I would probably sample a couple menu items.

The food looks and sounds like it is delicious (exception is the sushi). If they do delivery, in addition to takeout, I would probably sample a couple menu items.

Hi, Chuck’s is very good. I checked and the restaurant is not doing delivery at this time but they are looking into it. You can do curbside pickup. Thank you so much for your comment Betty.