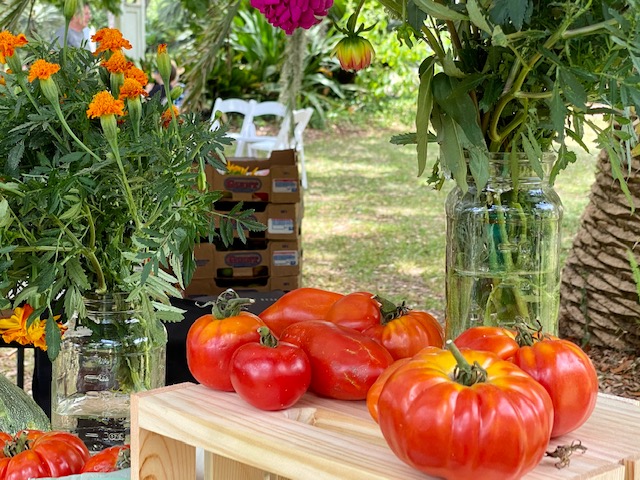 Who had the cutest tomato? The biggest or ugliest? Check out the 2021 contest winners.

Farm-fresh food. Live music. A compelling cause. And tomatoes, lots of tomatoes, in varied shapes, sizes and colors. All these factors combined for a fruitful 2021 Tomato Feastival on June 6 at the Goodwood Museum & Gardens to benefit the Red Hills Small Farm Alliance.

“It was just an amazing turnout,” said Kate Wasson, a board member of the Red Hills Small Farm Alliance and Feastival planner. “We were hoping for 500 people and when I saw the line wrapped around for blocks I couldn’t wrap my head around it.”

Early estimates project there were at least 1,100 attendees and possibly as high as 1,400, at the event, a longtime tradition of the Alliance, a nonprofit supporting our local farming community.

It was a day to celebrate tomatoes and local produce and the simple pleasure of being at an outdoor gathering with family, friends and farmers, said Cari Roth, president of the Red Hills Small Farm Alliance.

Annie Giddens, Jan Graham and Teresa Morris were among those enjoying the day, sitting under a tent, savoring their slices of delicious tomato pies made by chef Jessica Bright McMullen, owner of KitchenAble Cooking School and Catering.

The event was pretty great, they agreed. “To me, it’s like returning to life,” said Teresa. “Thank God for the vaccine.”

My husband and I strolled under the shade of stately oaks, devouring those yummy tomato pies made by Jessica, scrumptious chocolate cupcakes baked by her daughter Madeline; a traditional tomato sandwich made with mayo, slices of cucumber and white bread; sausage dogs from Glendower Farms; ice cream sammies from Southern Craft Creamery and a lager from Lake Tribe.

Vendors were either selling out or replenishing their products. Lake Tribe Brewing Company restocked but still ended up running out of beer, said Kate. “Ology sweeped in with 15 cases and got more. Our beer vendors saved the day.” Proof, Ology and Deep brewing companies also contributed products for the Feastival raffles. Among the events was the traditional tomato contest.

Winners were: *Overall Best Tasting (including all varieties):

Tom Zingale, organizer of the tasting contest with help from Debbie Head, said there were 50 different entries this year — 30 big tomatoes and 20 little ones. Several judges pick the winners in a double-blind system.

“There were a lot of new faces, which was awesome,” said Tom, recalling the homespun nature of the event’s early years.

The Feastival began in 2006 as a small “farmer to farmer” gathering at Turkey Hill Farm, said Louise Devine, owner and operator of the farm with husband Herman Holley.

“There wouldn’t be a tomato feastival without Louise and Herman,” said Tom, a tomato grower and owner of Tallahassee Floor Finishing. “It started as an old-school pot luck where everyone would sit under the trees and talk and share information.”

To honor Louise and Herman, Tom presented them with an award at the Feastival in recognition of all their years of hosting the event until it moved to Goodwood in 2019.

The award says “As a lifetime achievement award to Herman and Louise for the Tomato Feastival since 2006.”

“Even with more people, the community sharing aspect of it was still there,” said Louise, reflecting on the size of the crowd at Goodwood this year.

Most of all, the event was a chance for people to meet farmers and sample locally grown food, said Jennifer Krell Davis, a member of the Red Hills Small Alliance Board.

We got a chance to stop by stands from Aaron Nicely and Derek Phillips of Handsome Harvest Farm, David and Sally Gist of Green Gate Olive Grove, Brad, Meg and Emma Austin of Southern Craft Creamery, brothers Daniel and Jordan Miranda of Legacy Greens, Drew Schmoe, owner of Schmoe Farm and Kiona and Chris Wagner of Rocky Soil Family Farm with their adorable twin girls.