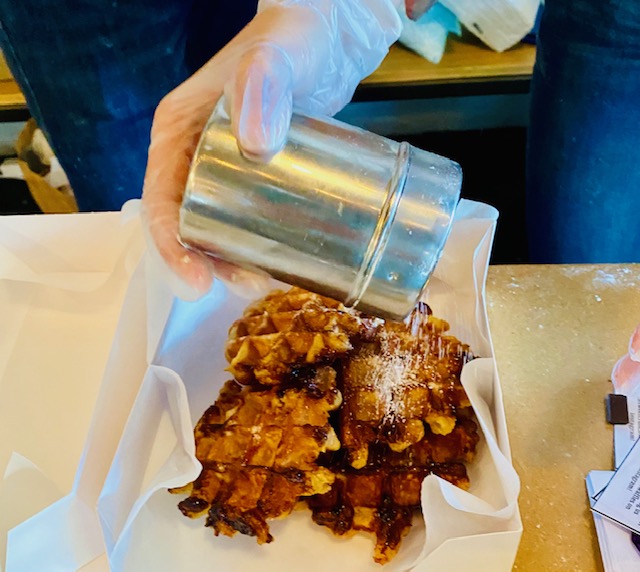 Popups are a fun experience because it’s an unexpected treat. They’re a chance for entrepreneurs and chefs to share their talents at an established business, adding the element of surprise and adventure for their customers.

Along with many other hungry people, I had that experience today (May 28) at the Waffles & Coffee Pop-up at Ology Brewing Company in Tallahassee’s Midtown. It was a double popup really because Sweet Crunch Waffles was teaming up with Tallahassee’s best-known barista and coffee connoisseur, Jason Card (Journeyman Coffee) and the new Ology Coffee Co’s venture.

He and Melissa expected to have enough dough to sell waffles until 2 p.m. but they had sold out by 11 a.m.

“We didn’t expect this many people,” said Tyler. Plus a lot of customers ordered a four-pack of waffles to go, he said.

Melissa, a former technician for an ophthalmologist, said she decided to make waffles after falling in love with them while traveling to Belgium. The pandemic put plans on hold but now she and Tyler hope to do more popups and plan to launch a food truck this summer.

My friend Alix Kalfin and I both savored our chocolate waffles (original and Nutella were also available) and they were sooo good, a perfect counterpoint to our lattes. The Sweet Crunch Liege took me back to my own obsession with Belgian waffles after discovering them, first as a child at the New York World’s Fair in Queens, and later in Europe.

Belgian Liège waffles are typically made with a yeast dough, giving them a slightly different texture.

My friend Alix really liked the crunchy outside with the chewy inside, even better with melted chocolate and a dusting of powdered sugar.

At another table of customers, Traylor Roberts, co-owner of Hummingbird Wine Bar, was also happy with this sweet snack. “It was a super exceptional waffle,” said Traylor,  joined by

friends Michael Lowstetter and Kyle Marllari. “I got one with Nutella, because why not?”

He also praised the texture of the waffle, “a perfect match for coffee.”

Incidentally, stopping by for coffee is also worth the visit. You can enjoy the friendly, laid back vibe at the Ology Coffee Pop-up from 7 a.m. to 11 a.m. on Wednesday and 7 a.m. to 2 p.m. Friday. You’ll find the same neighborly vibes plus great beer at the bar.