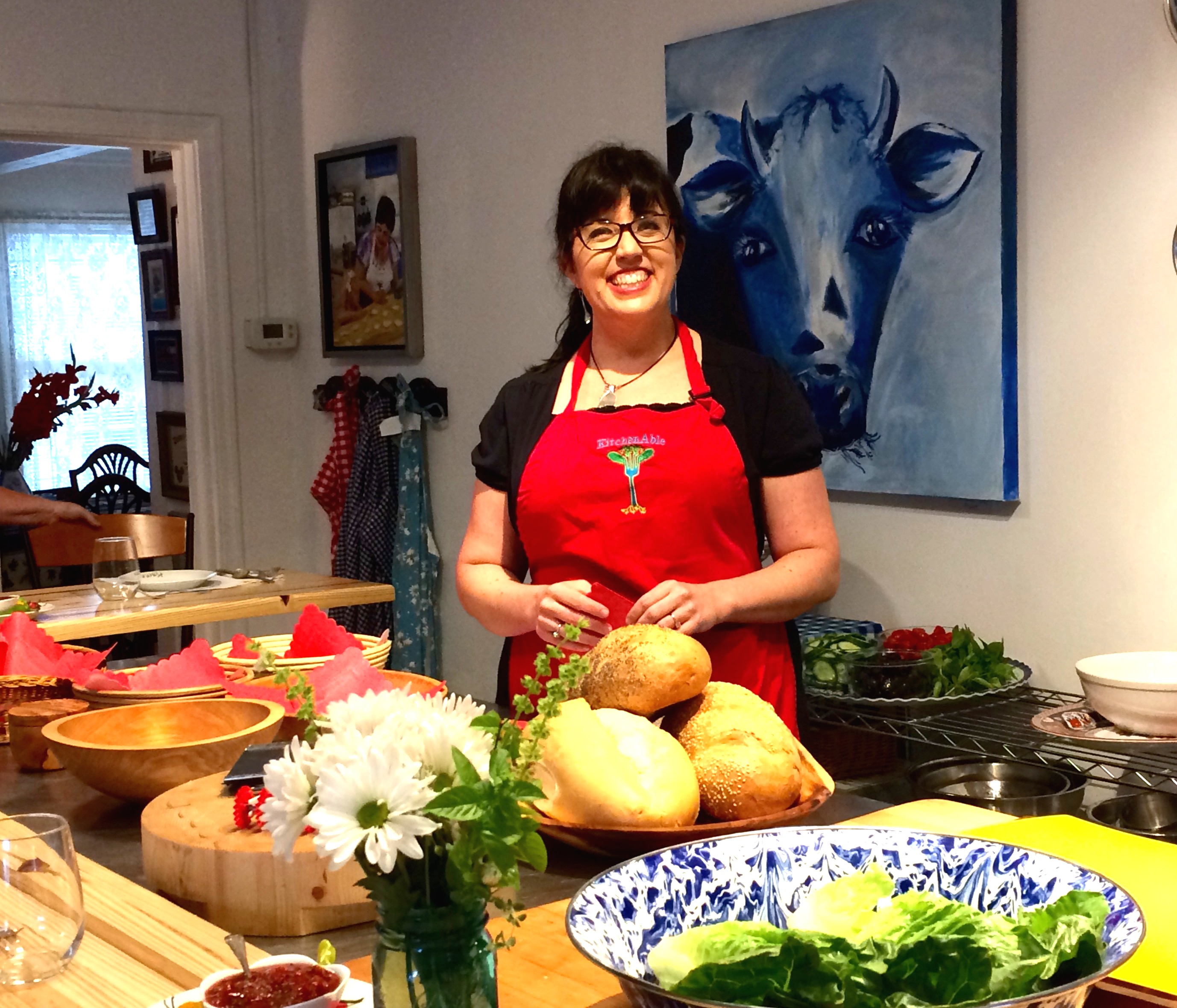 As a farmer’s daughter, Jessica Bright McMullen learned early on that “food is love.” It’s a lesson that has sustained her both during times of struggles and success. And it’s one of the many reasons you’ll want to break bread with this dynamic owner of KitchenAble, a cooking school located in a quaint Lake Ella cottage. 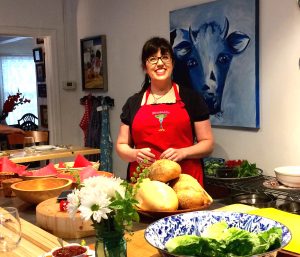 On a personal level, McMullen is a mom, artist, volunteer. The list goes on and on but a passion for cooking pervades all that she does.

“For me, food is an expression of love,” said McMullen. “I really do love being able to use food as a way to nurture others. When someone stops by after a meal and tells me it’s an experience they’ve really enjoyed, it humbles me. I feel like I have done what I set out to do.” 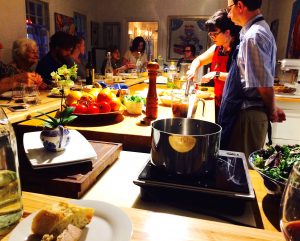 During classes and chef’s dinner nights, everyone sits around a communal table to watch McMullen work her magic. Her husband Chris and friend Glenn Berman help with prepping and washing dishes. Her 10-year-old daughter Madeline is a skillful sous chef. At one class on pasta making, Madeline breezily sliced dough into long strands and worked a rolling pin like a pro. 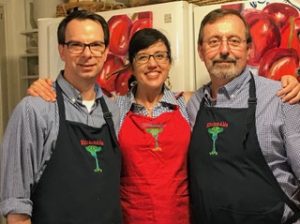 Classes and dinners are a BYOB affair, so it’s not long before strangers relax and get to know each other. At one dinner, a guest stood up and recited poetry. The room quickly filled with laughter — and heavenly aromas. No wonder McMullen forms connections with all those she meets.

“Most of my students become my friends,” she said, offering a guest a cup of her fresh-brewed tea blend and shortbread cookies. McMullen is always cooking, always doing something. “I don’t watch TV,” she said, flashing her broad smile. “That helps.”

McMullen came across the cottage setting for KitchenAble nearly four years ago. She peeked in the window and saw herbs in the window boxes and a butcher block table inside. Her heart quickened. Four months later, she moved in.

“So I was able to buy that butcher block table and weed those herbs,” said McMullen, who spruced up the space. Like the charming setting, much of the decor has personal value, such as the antique chocolate molds, the punch bowl from her grandmother’s best friend, Miss Pearl, and the lovely bread bowls. 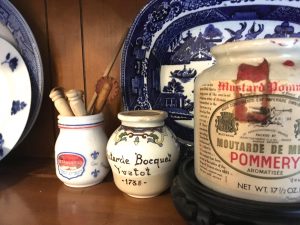 “The things that you see here were given to me by my students or friends and they have stories behind them,” she said. “Many are family heirloom kitchen pieces and I feel like those things have been infused with love by the people who used them. I’m very honored and privileged to have these things in my possession now.”

Whether in her classes or chef’s table events, McMullen’s repertoire spans the globe, offering dishes from chicken Marsala to Moroccan beef stew.

“Jessica has so much enthusiasm it’s catching,” said Sandy DeLopez, a regular at KitchenAble’s cooking classes with her husband Tom. They went to one class and were hooked. 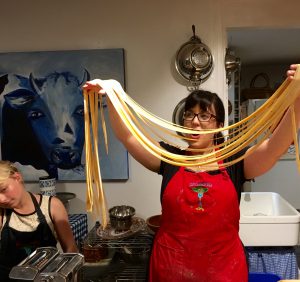 “Her classes are fabulous,” said DeLopez. “By the time you leave, you’ll know everyone in the class. There’s nothing like it in Tallahassee.”

That’s partly because of McMullen’s steadfast belief in the transformative power of a home-cooked meal.

Her loyalty to locally grown food is rooted in her childhood, growing up on a small farm in Ayden, North Carolina. Her father grew tobacco, wheat, corn, soy beans and cucumbers and raised pigs and cattle.

She was just five years old when she started cooking on her grandfather’s wood-burning stove.

“I’d toast the pecans from the trees in his yard and scramble eggs in the cast-iron skillet,” said McMullen.

When she was seven, “the tobacco market fell out” and her father lost the farm. It was a difficult time for her family. McMullen’s parents divorced and she split her time between her dad in North Carolina and her mom in Jacksonville.

Her father, an avid fisherman, opened a seafood market when she was 13. “I learned how to filet and clean all kinds of seafood.”

McMullen knew she wanted a career related to food. “I wanted to take home economics and my high school guidance counselors laughed me off.”

After high school, McMullen studied hospitality administration at Florida State University and was offered a job at Walt Disney World’s All-Star Music Resort. “They put me in the food court, flipping burgers. I was devastated,” said McMullen. “It was nothing like my fantasies.”

Still, she learned the ins and outs of working in a kitchen and on her breaks she would watch the cooks at Disney’s opulent Victoria & Albert’s “where I could see the preparation of beautiful food.”

McMullen ended up working full-time at Disney, where she met her husband Chris. She began cooking at the well-regarded California Grill at Disney’s Contemporary Resort. Later moves took the couple to colonial Williamsburg and Lake Tahoe. 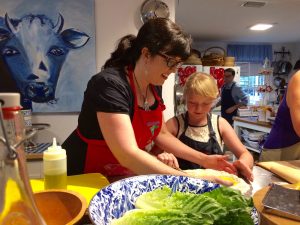 The McMullens eventually moved to Jacksonville, where Chris went to law school. The couple have a son Max, 15. They became foster parents and adopted Madeline.

McMullen has worked closely with nonprofit groups including Family Support Services of North Florida and Second Harvest. In 2009, Gov. Charlie Crist presented her with the “Point of Light” Award for her efforts to promote adoption awareness. She received the President’s Call to Service Award from President Barack Obama.

“My mother’s life’s dream was to be a stay-at-home mom and it didn’t work out,” McMullen said. “Maybe she planted that seed in me of wanting to nurture and provide hospitality. I’m fortunate I’ve been able to make that my vocation.”

McMullen’s penchant for hospitality has led to surprising ventures. Her husband’s boss loved her cooking, which led to lessons for his wife and her friends. The lessons led to a job as a spokeswoman for General Electric Appliances, which evolved into a regular TV spot.

Cooking for a church benefit landed her an interview on a Christian radio station called The Promise. McMullen became a regular on the station for eight years, sharing recipes and tips. Through that show, she met Julie Hadden, a Season Four finalist on NBC’s “The Biggest Loser” and wrote a section of healthy recipes for Hadden’s book, “Fat Chance.”

In recent years, McMullen has been combining travel and cooking. In 2012, she took cooking lessons at Le Cordon Bleu in Paris. Then in June, she shared her love of France with nine students. “It was a moveable feast,” said DeLopez.

McMullen also took a group to Panama and plans another teaching trip to Brittany in 2018. 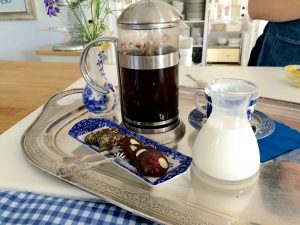 “French cuisine seems very, very complicated and fancy from a distance, but really at the heart of it, the backbone of it, is getting fresh, local ingredients,” she said. “When you cook that way, wherever you are in the world, the challenge isn’t what you do but what you don’t do.

“As long as you don’t screw up a delicious tomato, you’ll have a delicious end result,” said McMullen. “It’s recognizing that, and valuing that ingredient. These are things I learned as a farmer’s daughter and that’s something that has run through my family for many generations.

“It’s not that the French are more advanced or complicated than we are,” she added. “It’s that they haven’t forgotten that.”

McMullen never forgets that cooking for a living “has not only enabled me to do what I love, it’s enabled me to have a much broader and richer collection of friends and people who I consider family. I feel very blessed because of that.” 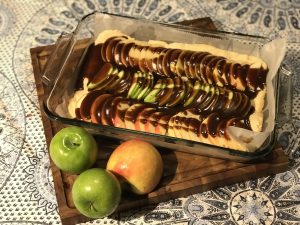 Preheat your oven to 350°F.  Make the caramel by combining the brown sugar and butter in a saucepan over medium-low heat. Whisk gently and cook for about 3-5 minutes, until it thickens and sugar dissolves.

Slowly add in half-and-half and vanilla paste, while whisking.  Increase temperature to medium-high and bring mixture to a boil and boil for 60 seconds.  Remove from the heat and stir in the salt.

Using your mixer, cream butter, salt, and powdered sugar together.  Gradually add the flour to form dough.  Place the dough in a 9 x 13 baking pan lined with parchment paper.  Press the dough into an even layer on the bottom of the pan.  Bake at 350°F for 15-20 minutes, until it looks dry on the surface, then remove from oven.  Cut apples into thin slices and arrange – overlapping– in a layer on the shortbread.  Pour caramel over the sliced apples.  If desired garnish with toasted pecans.

* Vanilla paste is a thick syrupy paste made from vanilla beans with the small flecks of the beans visible.  If you don’t have that available you could substitute the same amount of vanilla extract.

just love the good work you are doing.

Thank you so much for you comment. I appreciate feedback and ideas. Enjoy!

Thank you so much!