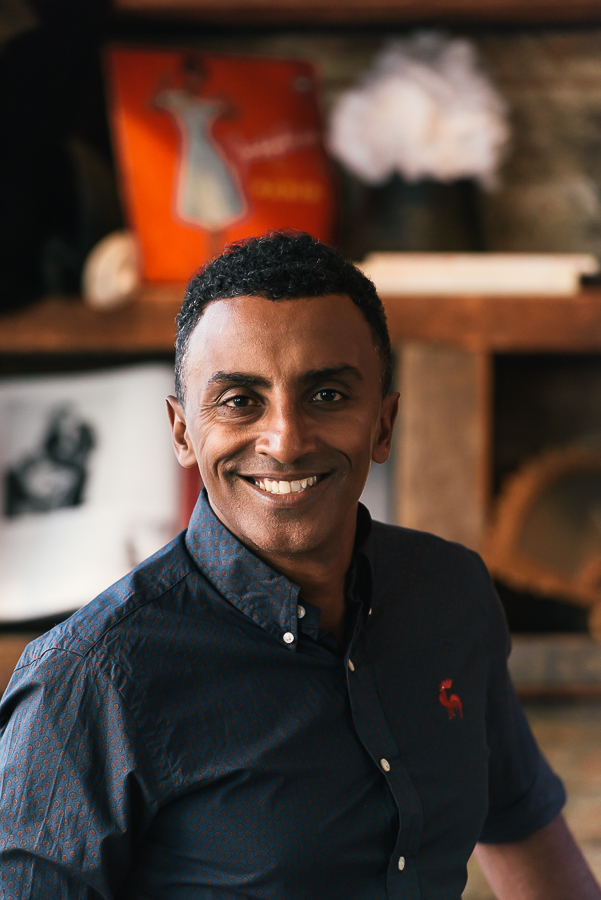 Marcus Samuelsson was born in Ethiopia, raised in Sweden and today is an award-winning chef, cookbook author, TV host, father of two and owner of a dozen restaurants.

He’s won multiple James Beard awards, cooked for President Obama and prime ministers, served as a judge on TV shows like Top Chef and Chopped, and is the youngest chef ever to receive two, three-star ratings from The New York Times. He was also crowned champion of the TV shows Top Chef Masters and Chopped All-Stars and was the winning mentor on ABC’s The Taste.

And now he’s headed to Florida’s capital city as the headliner for the annual TCC Foundation’s signature event, Cleaver and Cork.

You wouldn’t guess that a person who has become such a star in the culinary world once nearly starved.

In a 2018 article in Time, Samuelsson wrote that he was “born to improper nutrition” in Ethiopia, and at 2 ½ years old, was only 22 pounds. He wasn’t expected to be alive after 18 months.

After his mother’s death, he and his sister were adopted by a family in Sweden.

“I was very fortunate to get adopted and very grateful for my parents and my extended family,” Samuelsson said in a phone interview. “They always gave me and my sister the support we needed to do anything and do it well.”

Fans will be able to learn more about the many things Samuelsson has done well when he comes to Tallahassee Community College in March.

The fundraiser, celebrating its fifth anniversary, expands to three programs in 2020. The newest event is “A Chef’s Tasting” on March 1, a progressive dinner party with local restaurants putting their own spin on Samuelsson’s recipes.

The second event on March 5 is “A Session with Chef,” an opportunity to see Samuelsson prepare recipes from his books and restaurants. On March 6, the highlight is a four-course meal curated by Samuelsson, paired with global wines selected by sommeliers.

Tickets to all three events are available at cleaverandcorktcc.com

Samuelsson is the latest celebrity Food Network chef drawn to the annual fundraiser. In previous years, the TCC Foundation has brought in Alex Guarnaschelli and Amanda Freitag.

Heather Mitchell, the TCC Foundation’s executive director, said she expects Samuelsson, an acclaimed chef with “international and southern flair,” to be “a real showstopper.”

His story, as well as his cuisine, is indeed compelling.

He developed a love of cooking and eventually attended top culinary schools in Sweden and apprenticed in Switzerland and Austria.

Along with nurturing a love of cooking, his family also shared a love of adventure and travel to  “learn about different languages and cultures.”

Samuelsson eventually came to the U.S., where he started working at the Scandinavian restaurant, Aquavit, in New York City. When the restaurant’s chef, Jan Sendel, suddenly died, Samuelsson was asked to take over the position. He was 24-years-old. The restaurant wound up receiving three stars from the New York Times’ critic Ruth Reichl.

In her 1995 review, Reichl wrote: “Swedish food often balances salty with sweet – think of herring – but Mr. Samuelsson has appropriated the idea and made it his own.”

Samuelsson has continued to create his own style, melding his life experiences in the kitchen. While he doesn’t have immediate plans to open an Ethiopian venue he employs influences from the country – he and his wife visit family members there every other year – in his Red Rooster restaurant in Harlem. He also turns to Swedish cooking techniques and adds a dash of flavor and style from his many global stops.

The Red Rooster Harlem touts a menu that “celebrates the roots of American cuisine.” Downstairs, there’s Ginny’s Supper Club, with a speakeasy/”Twenties” feel to it.

One of his newest restaurants, slated for early 2020, will specialize in comfort food in a former pool hall in the Overtown area of Miami. Eater Miami notes it’s part of a redevelopment effort for a neglected part of the community.

As the host of “No Passport Required,” from VOX/Eater and PBS, Samuelsson explored growing food cultures in six American cities. His second season of the show will air in January 2020. His new audio project with Audible, titled “Our Harlem,” is out now.

Samuelsson’s story is likely to be an inspiration, especially to students and aspiring chefs.

He urges them to “soak up” what they can in college, working with mentors, and then “get out there in the world.”

“Everything I’ve been able to do has been because of bringing in a different perspective whether it’s Japan or Europe …” Traveling, he said, “is a key ingredient.”

“My mission with each project — whether it be a new restaurant, book or TV show,” said Samuelsson, “is to celebrate the food and the culture.”

how to make a drink from roselle plant