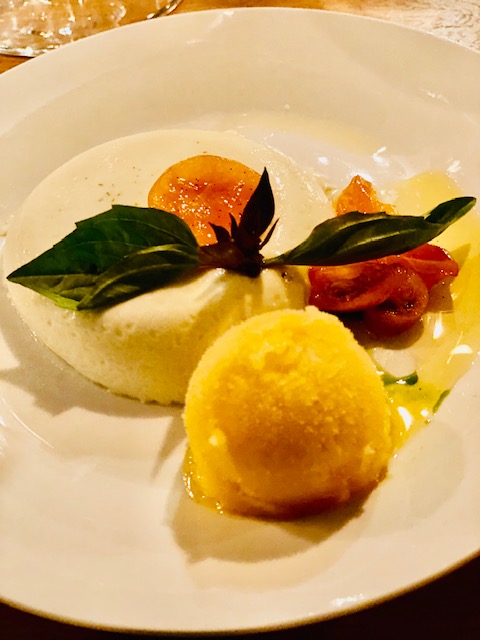 Poco Vino, the new wine shop and event space, was recently the setting for a magical evening with Sylvia Gould, the beloved pastry chef at Kool Beanz Cafe. Sylvia also has the distinction of being named a semi-finalist for the coveted James Beard Foundation award for outstanding pastry chef in the country. She’s the first and, so far, the only nominee from Tallahassee for the award, considered the Oscars of the food world.

Poco Vino presented a “Dessert for Dinner” event, pairing the creations by Sylvia with wine choices selected by the sommeliers at this charming space, owned by Amanda Morrison and fiancé Gus Corbella.

On his Instagram message, Corbella said this about Sylvia and I’d have to agree: “We love Chef Sylvia Gould. Not only is she one of the kindest and most wildly talented pastry chefs in the South, but for anyone living under a rock these past few years, she is also a James Beard Award semi finalist – the first in Tallahassee history.

“We were so happy that she agreed to be featured for one of our Chef’s Wine Dinners, not only so we could showcase her artistry, but also so we could celebrate her achievement and the national door of recognition she has helped to open for the Tallahassee food scene. Thank you, Sylvia.”Thanks for expressing that so well!”

As for Poco Vino, it’s located inside the historic Gallie Hall building, which was built in the late 1800s. The place has an intimate atmosphere with its brick walls, archways and a greenhouse, brightened by candlelight for the lovely, private wine dinners. It’s reminiscent of a nook you’d find in a big city, but we can enjoy it right here in Tallahassee.

I have to say my husband and I felt particularly decadent, and pretty wonderful, to be eating dessert for dinner. We also met some really nice people.

If you’ve been to Kool Beanz, you may have enjoyed Sylvia’s artful desserts but here’s a lineup of what she prepared for this event with wine pairings. Check Poco Vino for tickets to future dinners and tastings. A Valentine’s Day wine tasting and wine dinner with the owner of Liam’s in Thomasville are two of the upcoming events.

Ma’s Diner a hit for its comforting breakfast/lunch food

Food and Wine Festival a sparkling addition to Cleaver and Cork