written by Tallahassee Table May 3, 2022 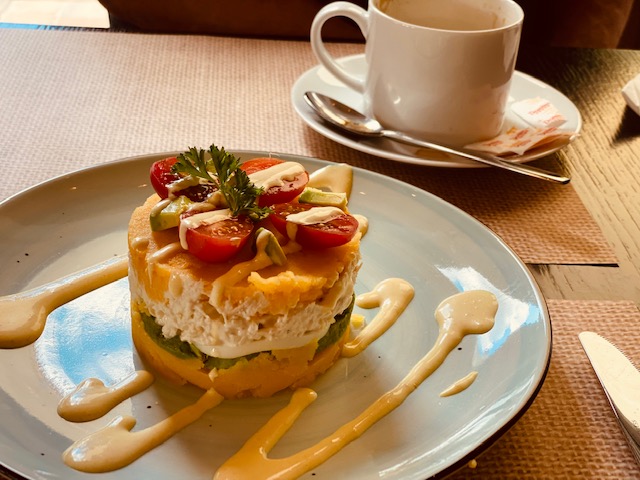 Cafe de Martin has only been open a short time but it’s already a destination you’ll want to try.

The cafe is the only place in town that I know of that offers Peruvian cuisine.

Lomo saltado is one of the Peruvian classics at Cafe de Martin. Photos by Tallahassee Table

Cafe de Martin initially offered breakfast but the place is now focusing on lunch six days a week with plans are to add dinner at the beginning of January.

On a recent visit, my husband and I savored the Peruvian favorites causa de pollo, a traditional and homey dish made with stacks of yellow mashed potatoes, avocado and chicken salad (also available with shrimp) and hearty lomo saltado, a stir-fry with sauteed red peppers, onions and beef (or chicken) served with rice and French fries.

Chef Martin Araujo Bohorquez makes all his own desserts including the delectable Suspiro de limeña.

Everything we tried was delicious, including our scrumptious dessert, Suspiro de limeña, which means “Sigh of the lady from Lima.” The name is so poetic but you’ll also swoon over its light meringue and velvety caramel base. Martin makes all the desserts

I have to mention the coffee selection as well. The cafe offers several coffee drinks. I slowly sipped my cafe con leche, but you can also get a latte, cappuccino, cortado and mochaccino with coffee from local Midtown Coffee Roasters (with bags for sale at the cafe). The cafe also serves beer and wine.

We did have breakfast at Cafe de Martin not long after it opened on Oct. 8. We sat on the deck accented with plants (incidentally, dogs are welcome outdoors). It was a pleasant place to start the day. The breakfast menu is currently limited but includes an omelet and egg dish. I went right for the French toast, garnished with fresh raspberries and blueberries, bacon, jam and coffee, a good deal for $8.

A Peruvian-style empanada with carne asada is a must-try at Cafe de Martin.

I’d also recommend the Peruvian-style beef empanada, with a flour shell, dusted with powdered sugar and served with a wedge of lime. The filling, carne asada, was juicy and savory. I’d say this is a must-try.

The man behind the restaurant is chef Martin Araujo Bohorquez originally of Lima, Peru.  He has a background in restaurant management and attended Le Cordon Bleu Peru. Martin, who has been working in the restaurant business for 25 years, has an extensive collection of recipes from many of the Peruvian chefs he has known in the food business, aside from his own repertoire. You’ll often see co-owner Gary Parsons greeting customers and making recommendations to those who may not be familiar with Peruvian cuisine.

You can order from the counter or get table service.

Martin remodeled the cafe, formerly Carlos’ Cuban Grill, and it has a rustic but light decor with wood benches and colorful artwork.

Outdoor seating is still a popular choice and you’ll find an attractive and hidden patio and fenced-in deck with plants, located on the side of the storefront eatery.

Inside, the artwork includes several framed Ella illustrations (about life on a lake through the eyes of a duck) by Nathan Archer, editorial cartoonist for the Tallahassee Democrat. I found out later that he was sitting at the table next to mine. The cafe intends to alternate the work of local artists.

If you haven’t tried Peruvian food, it melds the cuisines of several cultures — combining ingredients and techniques from indigenous people as well as arrivals from China, Japan, Africa and Europe. You’ll find dishes with fried rice as well as spaghetti, ancient flavors and modern interpretations.

It’s no wonder that Peruvian food is considered among the best in the world. In 2019, the country was chosen, for the eighth consecutive year, as the best culinary destination in the world, at the World Travel Awards, considered “the Oscars of Tourism.”

Judging from our first impression, Cafe de Martin is bound to be a popular destination in Tallahassee.

Cafe de Martin is at 2743 Capital Circle NE, in the plaza with Esposito Garden Center. It’s open from 11 a.m. to 3 p.m. Tuesday to Saturday. Website: https://www.cafedemartin.com/

Celebrating women at the helm of Tallahassee’s culinary world

I lived on Peruvian food when
I lived in Chicago. I’ve been waiting for s nearby restaurant. Thanks

I know what you mean. I had a lot of wonderful Peruvian food in South Florida and I’ve missed it. I hope you enjoy Cafe de Martin. I hope they’re able to offer dinner soon. Thank you for reading Tallahassee Table!