written by Tallahassee Table May 3, 2021 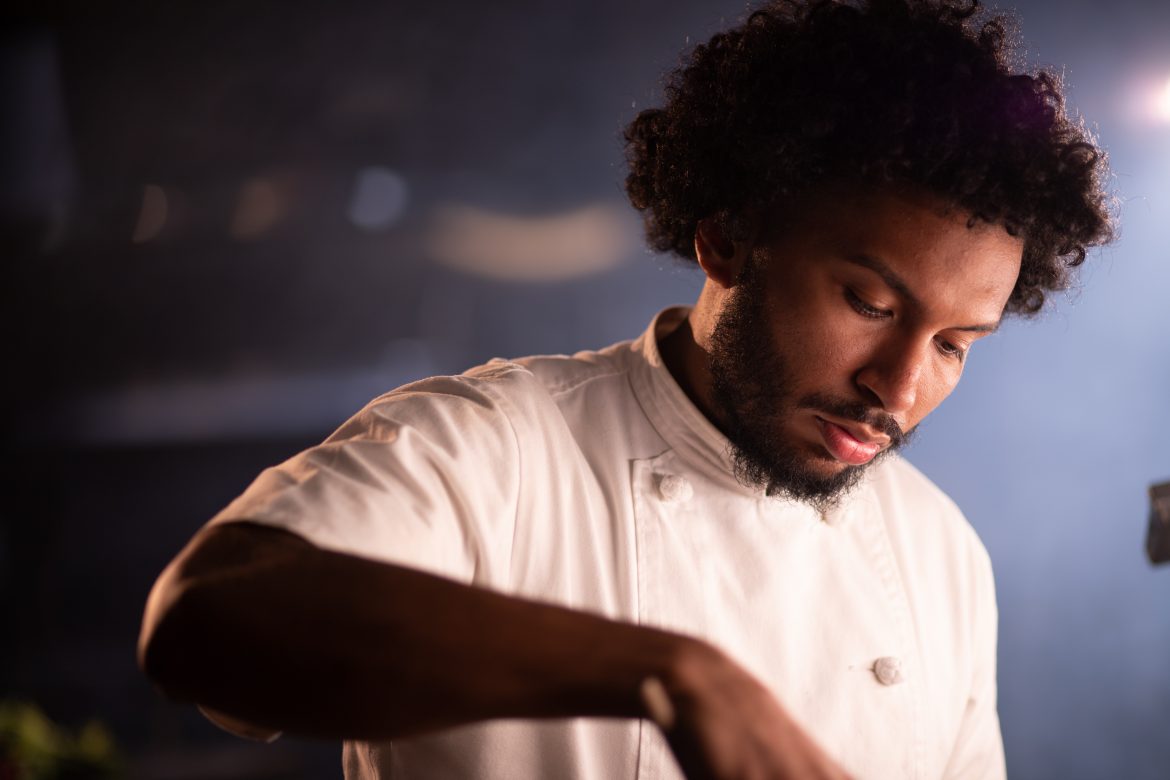 Many of you probably know vivacious and talented chef Leon C. Brunson from his years cooking at popular Kool Beanz Cafe or as a cooking teacher of in-person or virtual cooking classes. But, at age 26, this local chef has now taken another big step.

“I bought a restaurant,” said an exuberant Leon, making the announcement on a livestream reveal March 18.

He has purchased KB Kitchen in Lake Ella from Keith Baxter, owner of Kool Beanz Cafe. Leon plans to convert the cozy cottage into a space for catering, classes, intimate dinners and culinary events.

He’s calling the restaurant, Leon’s, and said he expects to open in the fourth quarter of the year.

“It’s a new era for me,” said Leon, who will present a range of cuisines at his cafe, from Southern-style and vegetarian to international choices like Japanese and Mexican fare.

Leon had worked at Kool Beanz until the pandemic forced the popular destination, like so many other restaurants, to close or offer takeout only. Leon switched gears by hosting free cooking classes, private events and doing catering.

He recently participated in the cooking demonstrations held during the first food and wine festival sponsored by Cleaver and Cork. The culinary event and fundraiser benefited the Tallahassee Community College Foundation’s Athletics Program.

Leon said he wants to continue working with local charities and nonprofits, such as Second Harvest of the Big Bend.

In March 2020, Leon was working at Kool Beanz when Baxter talked to him about buying KB, which hadn’t opened. Leon worked on getting investors but in the meantime Baxter sold the restaurant. It was a blessing because right after that, the pandemic hit.

As it turned out, the Lake Ella restaurant site became available again this year and Leon decided to take the plunge.

Announcing his new venture, Leon was clearly ecstatic about realizing a longtime dream.

Leon was enthusiastic about cooking from Day One, when he started working at Waffle House during high school.

“Every single day was so much fun for me!” he said.

“While in school, I worked my way up in restaurants to obtain real-life skills along with conventional training,” Leon states on his website. “Graduating culinary school in 2015 was preceded by my father having a life-threatening brain aneurysm.”

“I decided to get my bachelor’s in neuroscience from Florida State University. After obtaining my bachelor’s degree in 2018, I realized my heart was in food,” he said.

When Leon discussed his virtual classes he told Tallahassee Table: “Ultimately, it’s about sharing what I love and helping others.”

Leon states his mission this way. “ I want to share my experiences with people to motivate them toward supporting local farms and communities, encouraging sustainability, preserving traditions and making new ones. ”

And he wants to connect people through food, through tradition and through techniques.

He’s well on his way.

We congratulate you, Leon! All the best!

You can find out more about Leon on his website, leoncbrunson.com/

A new brick-and-mortar business for Pineappetit

This is Fantastic! This is what it means to never give up on your goals, your passion. There will be bumps, obstacles, along our way in this life, and we may have to detour for a bit, but your story shows that you have to keep your goals before you.

When one has found their Passion, he has found his Purpose. Congratulations! I wish my Son could meet you. He has an interest in cooking. He has had obstacles, and have worked in some restaurants here in Tallahassee. He needs tutoring, skills, of course a job. He needs a chance, someone can help him.

Thank you for your comment Char and good luck to your son.

So excited for you! Would love to host a dinner in my home for 8 or come to you? We all love food and cooking and Wine( we are all gatherers ) . Two years ago before Covid, I managed to have meals in Italy at 3 Michelin’s. Love a memorable meal!!! Look forward to hearing from you. Besos Shannon

I’ll forward your message to Leon. Thanks for your feedback.