A new brick-and-mortar business for Pineappetit

written by Tallahassee Table May 5, 2021 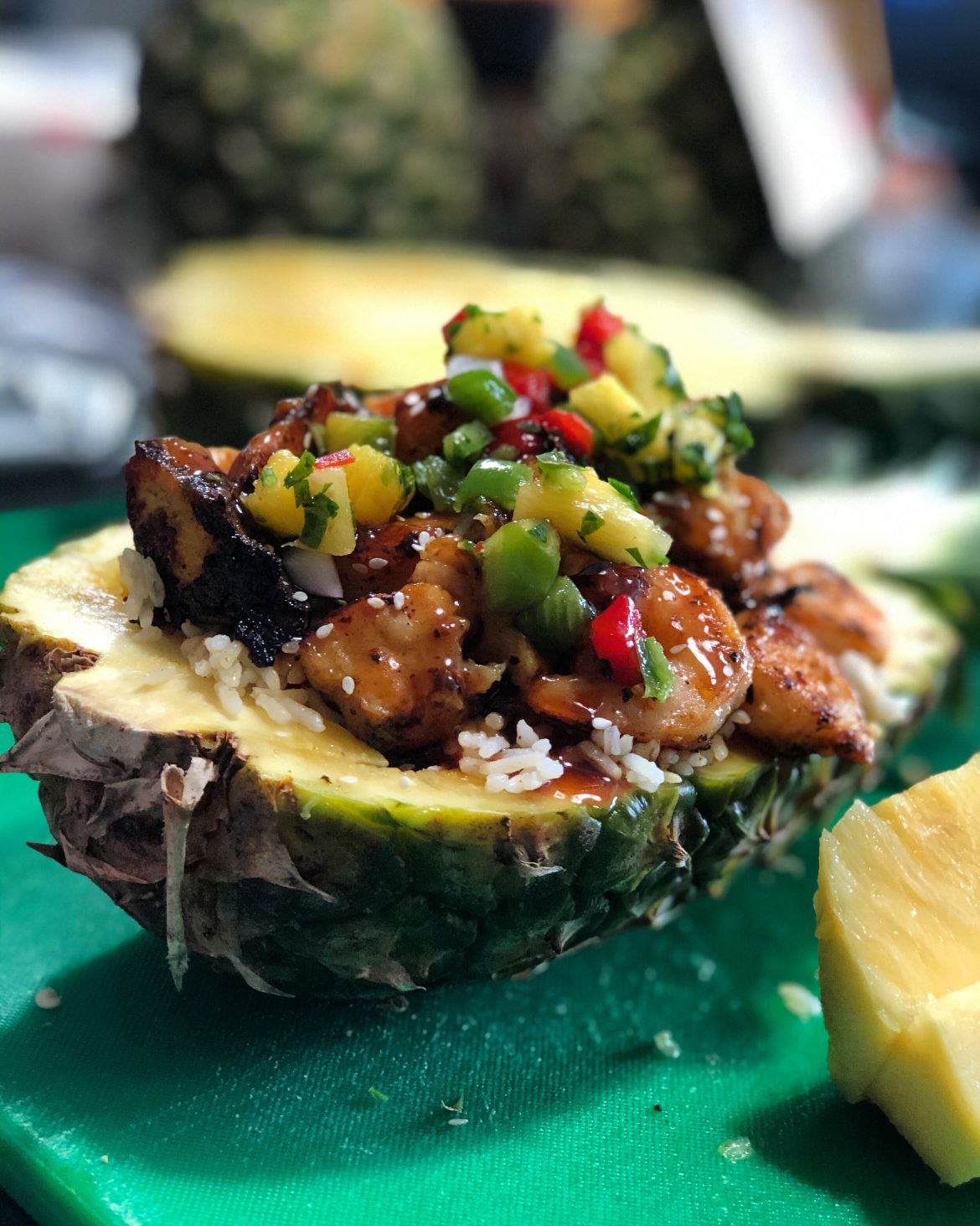 Owner of the popular island-themed Tallahassee food truck takes the next step.

Sam Burgess launched his food truck, Pineappetit, in 2018 and on April 22, 2021 he will take the next step: His popular island-inspired cuisine will be available in a brick-and-mortar business

The grand opening of his new restaurant, at 2037 W. Pensacola St., is open to all customers from 11:30 a.m. to 10 p.m. Thursday. Can’t wait to try his new restaurant because Sam has been cooking up big flavors in his yellow food truck for years.

He’s probably best known for his pineapple bowls, which are actually served in a fresh pineapple, sliced in half and hollowed out. The bowl is filled with cilantro lime rice as the base and you add your choice of protein (chicken, salmon, shrimp, lobster tail, black beans or steak), choice of sauce (from sweet ‘n spicy to lemon pepper) , and topped off with Sam’s signature salsa.

The sweetness of the pineapple balances the spicy/savory flavors

“From the first bite it’s like taking a vacation,” Sam told me when I tried my first pineapple bowl.

He was right. These delectable bowls have helped launch the popularity of what Sam’s “Caribbean soul” cuisine over the past four years.

Other items on the menu include his Rasta Pasta, penne noodle pasta tossed in his signature jerk Alfredo sauce, sautéed bell peppers and onions with your choice of protein (chicken, salmon, shrimp or lobster tail). It’s served with garlic bread and a choice of broccoli or asparagus.

Sam will also serve gourmet wings in your choice of sauce or dry rub and Caribbean patties, with a variety of fillings (beef, jerk chicken, curry chicken, curry shrimp or veggie) in a golden crust.

Pineappetit will offer dine-in as well as takeout options.

A release about the new business states that while the pandemic “resulted in an opportunity for Chef Sam to cater for the Google headquarters in California to be canceled, it brought about something much more significant than he ever expected; a sense of community that supports and uplifts one another. Despite the many hardships the pandemic has caused, Chef Sam is grateful for the group of like-minded individuals who encouraged him to take a leap of faith and pursue his desire to expand Pineappétit.”

He credits Tallahassee small business owners for their support and encouragement.

“The owners of Smoothie Time (Erick Smith) and JMO’s Sneauxball Catering Co. (Jarret Maloy) were two individuals that really pushed me to do what I’m doing now,” said Sam. “We all started around the same time with our food trucks. To see them have the success they’ve had with opening their brick-and-mortar sites during this time, really motivated me and made me feel like the time was right despite the current pandemic.”

A portion of the proceeds generated on the grand opening will be donated to the Golden Chance foundation, a local non-profit dedicated to providing resources and scholarships to individuals affected by the premature death of a biological parent(s). Sam said this is a a cause close to his heart. The owner of the nonprofit, Michael Jenkins, is a close friend who suffered the loss of both his parents at a young age.

Sam started learning to cook when he was a 13-year-old teen growing up in Cleveland, Ohio. During high school, he took over more of the kitchen responsibilities, cooking for his dad and sister, adding friends and family at the table.

But when he started college at Florida Agricultural & Mechanical University, he studied allied health pre-occupational therapy. And he then earned a master’s at FAMU in sports management.

Sam said that when he graduated, he was “surrounded by entrepreneurs” so he decided to give running his own business a try. He went back to his love of cooking. He started out with a small catering business on campus called Pineapple Express and then launched his food truck in 2018.

Sam will continue the food truck operation and his catering business as well.

We’re wishing Sam all the best in his new Pineappetit. Website: pineappetit.com/

Here’s a link to the menu: https://static1.squarespace.com/…/Pineappetit+Main+Menu…