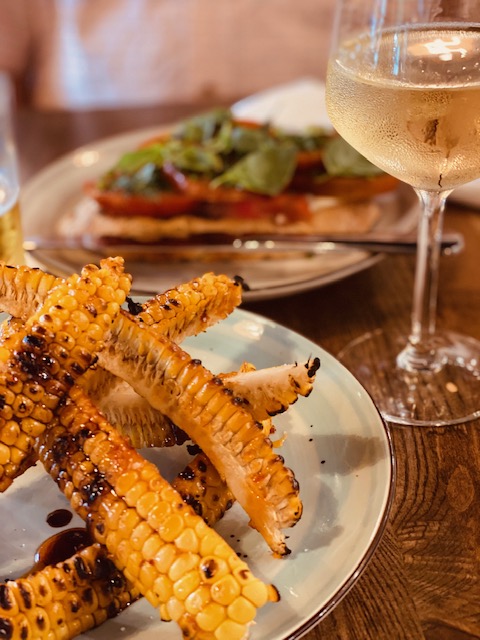 Swezey has made at least 6,000 of these delicate gems since the restaurant opened on Monroe Street in early May. It’s a labor of love for a young chef living his dream.

Swezey’s passion for Black Radish is evident in every aspect of the restaurant -– the design, the open kitchen, the emphasis on natural wines, farm-fresh produce, intriguing dishes, friendly service and a bouncy soundtrack. It’s a prime reason that Black Radish is already receiving raves as a top new Tallahassee destination.

“Black Radish is definitely my favorite new restaurant in quite a while,” said chef Joseph Richardson, co-owner of Lucilla. “It reminds me of eating tapas in Seville and Valladolid.”

“I thought it was amazing,” said Juliet Arnold, a Tallahassee hair stylist who was dining with friends on a recent evening. “It’s very different. It’s very eclectic. I love all the flavors and how they put it together.”

And she never felt neglected.

“The head chef (Swezey) came over to our table and made sure we were taken care of. I proceeded to watch him go around the entire dining room and talk to everybody else. Our servers were amazing as well.”

Swezey was working for Jesse Edmunds, owner of Seven Hills Hospitality Group  (Liberty Bar & Restaurant, Hawthorn Bistro & Bakery, Bar 1903 and El Cocinero), when he pitched a concept to his boss. Swezey envisioned a small place that served primarily vegetable and vegan small plates, pasta and a couple of meat dishes to appeal to a broader clientele.

“We’re not here to make you a vegan or vegetarian,” he said. “We offer more veggies and a little less meat. We still have steak and chicken options. We want everyone to come out and find something they can enjoy.”

My husband and I have dined at Black Radish four times, twice with friends, and we have found so many dishes to enjoy.

Swezey’s philosophy is “simple, straightforward, delicious food. You don’t have to do much to good food.”

Indeed, sauces may add sophistication but the cuisine at Black Radish is flavorful without overwhelming the ingredients. And ingredients rule. Swezey said he aims for seasonal products from local farmers as much as possible.

As for those large dishes, they currently include a chicken roulade and rib-eye steak with sides, as well as a vegan dish of fried tofu lettuce wraps, that are all big enough to share with two or more companions.

Each visit, we intended to try the meat options but then fell in love with the vegetable and pasta choices and had to have those. I’ve heard great things about the chicken and steak, though, so definitely need to try those.

Here are a few pictures of highlights on our dinner visits followed by more details.

Mitchel Rosborough, bar program manager for Black Radish, said the restaurant specializes in natural wines, from vineyards that practice sustainable or biodynamic farming. They don’t use a bunch of additives or chemicals (like pesticides). Nor do they have heavy interference in the making, such as lab-grown yeast during the fermentation process.

Rosborough, who previously worked at the wine shop Poco Vino and Bar 1903, creates his own draft cocktails. Black Radish also offers beer selections that are primarily from local breweries such as Proof, Oyster City and Ology.

There’s seating at the bar or at a few high-top tables.

The restaurant has a breezy, open look with a gleaming kitchen (with white subway tiles) and a dining room decorated in soothing, neutral colors offset by burnished wood. It’s casual, contemporary. Diners can get a front row seat watching the cooking at the counter or sit in an elevated row of seats dubbed The Gallery.

“I always kind of knew I wanted to cook,” Swezey said. “When I was 12, I asked for cooking stuff for Christmas.”

He was also inspired by his close connection with his grandfather, who prepared old-school Italian fare. “It would have been awesome if he could have seen this.”

After working restaurant odd jobs as a high school and college student, Swezey ran food operations for Florida State University, cooking and catering. About five years ago, he started as a line cook at Liberty Bar & Restaurant and did catering for Edmunds’ Seven Hills Hospitality Group.

When Swezey had the idea for Black Radish, Edmunds came up with the former home of Krewes de Gras, which is across the street from Liberty and Hawthorn. Krewes de Gras had been left untouched for two years. Edmunds and Swezey spent three months renovating the space.

“We installed the baseboards, poured concrete countertops, burned and installed every wood feature, painted everything,” Swezey said. “We did it all.”

“I couldn’t have done any of this without him,” Swezey said of Edmunds. “He’s the one who pushed me to realize we could do this, I could do this.”

As for the restaurant’s moniker, Swezey came across the name and thought it “had the right pop.” And no, black radishes are not on the menu – yet.

Being a dedicated chef/restaurateur has its challenges. Swezey lives in a refurbished school bus on a farm in Monticello, gets up early to feed the animals, leaves at 9 a.m. and returns about 1 a.m.

“Eighty hours a week isn’t fun,” he said. “It’s hard to do anything else, but it’s what’s necessary right now. I’m more than willing to do it to make sure that this place is a success. I do the extra steps because I really care about the experience and the food.

“If the place didn’t succeed and I didn’t feel like I gave it 100 percent every day while I was here, I don’t know if I would be able to sleep well at night.”

And there’s this: “This is kind of me still feeling a connection with the food every day and being part of the process.”

“I want to stay in the kitchen as long as possible,” Swezey said. “Working with my hands is what makes me happy.”

It will make you happy, too.

I watched Matthew Swezey make his homemade spinach tortelloni on a recent morning. Here are a few pictures of the carefully orchestrated process.