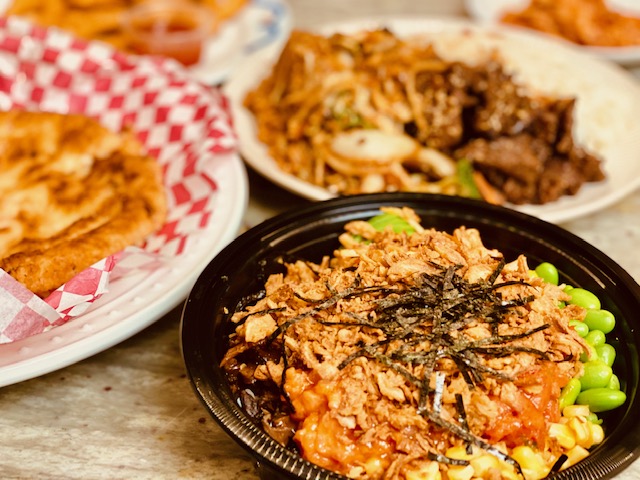 Kami Poke & Korean Kitchen is an exciting new addition in Tallahassee, especially if you’re looking for something different. The menu is so extensive and tempting, your toughest chore will be deciding what you want to order. Owner Jenny Lee opened the restaurant on Apalachee Parkway (around the corner from Canopy Road) in July but due to the pandemic is currently offering takeout only with plans to open for dining in.

My husband and I decided to share three dishes at Kami Poke. We picked the spicy tuna and salmon combo poké (pronounced poh-KAY)  bowl, which was packed with chopped, raw fish, crab salad, sliced avocados, edamame beans, shiitake mushrooms, corn, onion crisps and a garnish of roasted seaweed with a perky chili sauce — filling and refreshing.

Beef bulgogi, the classic Korean dish, was also a hit, the flavorful meat served with white rice and a scattering of sesame seeds and scallions — if you prefer milder dishes, this is a good choice.

Other dishes at Kami Poke include japchae, the Korean glass noodles; bibimbap (mixed rice with beef,vegetables and eggs); dumplings, barbecue squid; fried chicken wings; kimchi; seafood tofu soup; and a long list of rolls — including the FSU Roll and the Dancing Queen Roll plus sushi and sashimi dinners.

We’re looking forward to trying more of these enticing menu.

Get a schmear, a sandwich and lots more at Original Bagel Bagel

Thank these restaurants for holiday dining in and takeout