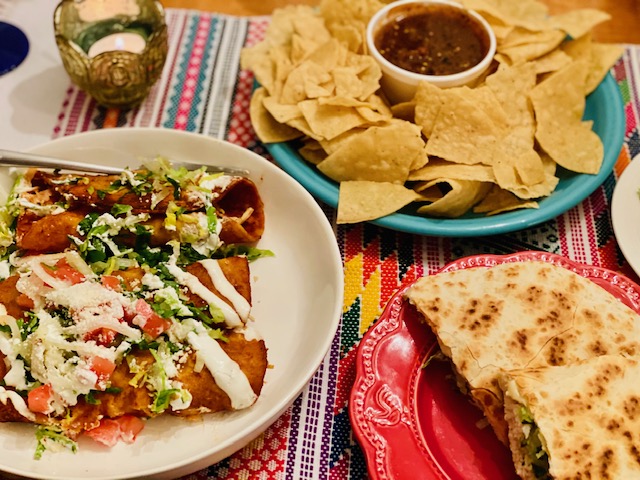 Edgar Gamez grew up hearing about the days when his mother and grandmother would sell their homemade tostadas after sunset in the plaza of a small town called La Yerbabuena in Mexico.

Edgar explains that his grandmother, Maria, would make tostadas by day and sell them in La Plaza at night. As a young girl, his mother, also named Maria, would run home at recess to help peel the tostadas so they could dry in the sun and be ready by evening.

“Plazas were a place in town where people would gather at night,” said Edgar, co-owner of Maria Maria on North Monroe Street. “Food was sold in the streets and people would bring tables and chairs, sharing time with families and friends.”

Edgar now wants to share these recipes, and sense of community, at Maria Maria, aptly named after his mother and grandmother.

Edgar is one of six children, four sisters and one brother. When he was six years old, his family moved from Mexico to Moore Haven, Florida, where they were raised on the dishes of their homeland.

Edgar said he had missed the authentic flavors of his mother’s cooking when he moved to Tallahassee. He attended Florida State University, where he studied criminology, and then later worked in area restaurants — though one of his early jobs was working in a deli at age 16. Aside from wanting to bring his family’s cooking to the capital city, he had an experience that changed his path.

“I lost an uncle who was very loved and he had lots of people attend his funeral,” said Edgar. “He was loved because of how he interacted with people and showed them how he cared. I wondered ‘How can I reach out to people and touch their lives and make a positive impact?’”

He discovered that in the restaurant business, he could talk to a lot of people and lead a team that would be headed in a good direction.

The path hasn’t always been easy.

After 10 months of planning and hard work, Maria Maria opened in July 2019, in the former home of Crepevine. Like so many new restaurants in town, the venue was slammed at first. After a few months, the restaurant settled down to “a nice flow of people,” said Edgar. “We were building a regular clientele when the pandemic hit and there was a huge drop in business.”

“We never left the beginning, baby stages when we were trying to get off the floor,” he said. “It’s been really tough.”

Maria Maria struggled but survived, adding platforms up for online ordering, building a takeout business and being vigilant about safety precautions. Now, slowly, more people are coming back to dine in

My husband and I have visited Maria Maria a few times. We dined here in the early days when the restaurant first opened, and enjoyed our meals but decided to wait until the crowds thinned. We waited too long because then the pandemic hit. We recently made it back to Maria Maria a few times for takeout meals.

One of our favorites here is Maria’s Tostados, based on that family recipe prepared by Gamez’s grandmother years ago. Listed under Small Bites, it’s a generous, flavorful dish, built upon a flat, crunchy tortilla with your choice of protein topped with lettuce, tomatoes, avocado, crema, pickled jalapeno, cheese and salsa.

The salsa here is pleasantly piquant, bright and fresh, with a slight kick. We enjoyed it whether served with chips or as a side with our dishes.

We were also happy to find a homey tamale at Maria Maria, made the traditional way, with a corn dough filling steamed inside a corn husk. You can order the tamale with chicken or cheese and salsa verde,served with a side of crema.

Also favorites here are dishes made with mole, a complex sauce that can turn out “too sweet, too smokey or too spicy,” said Edgar. “We have a recipe that’s pretty well-balanced, which is what you look for in a mole.”

Also rave-worthy: enchiladas caseras, one of the dishes marked “family recipe.” It is indeed a comforting rendition with three enchiladas, which we had with chicken. It comes with lettuce, tomato, creme, cheese and your choice of salsa. The red color comes from the guajillo peppers in the sauce. A friend who also ordered the dish said she would happily order it again. I’d agree.

For dessert, we’ve enjoyed the churros, which aren’t yet made on premises, and the flan — if you’re used to the Cuban version, Mexican flan is a bit thicker. You’ll also find tres leches (a light cake made with three milks) and a few baked goods.

Edgar doesn’t yet have a liquor license to sell cocktails, but you can order wine or beer and tropical juices like hibiscus.

Maria Maria is a casual, friendly spot for a traditional Mexican meal at reasonable prices, run by a family dedicated to sharing homemade, family recipes. Edgar’s grandmother has passed but his mother, Maria Guadalupe G. Gamez, visits every four months. She was indeed thrilled with the name of the restaurant and of course, the familiar family recipes. “She’s the biggest fan ever,” said Edgar.

Betting she’ll have lots of company.