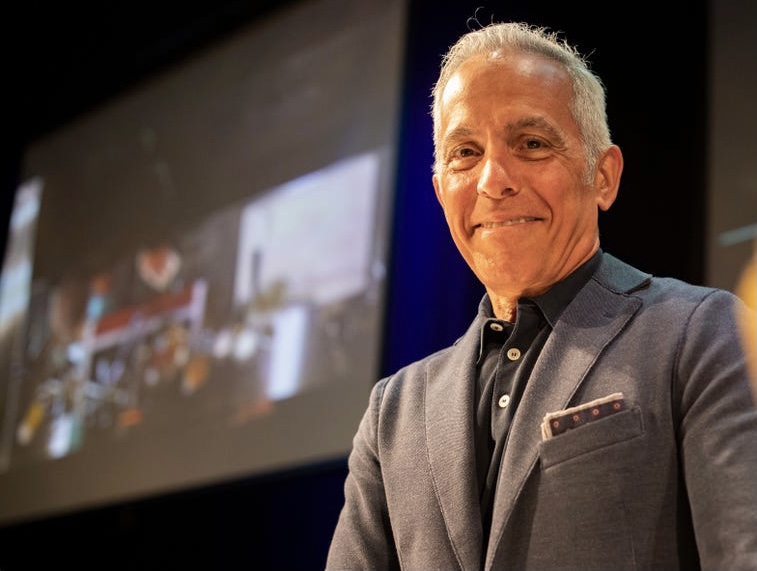 The famed chef, known for his starring role on TV cooking shows was the headliner at Tallahassee Community College’s signature Cleaver and Cork 2021 fundraiser.

If you’re a fan of TV cooking shows, chef Geoffrey Zakarian is probably a household name. Outside of his kitchen and restaurants, he’s either a co-host, judge or competitor on top programs including The Kitchen, Chopped and Iron Chef America. He’s also on the QVC channel with his Pro for Home, a line of more than 120 gourmet foods and culinary tools for home cooks.

But this week in Tallahassee, Zakarian was the headliner for a different production — Cleaver and Cork 2021, the premier culinary fundraiser held annually by the Tallahassee Community College Foundation. Proceeds from the event will go to TCC’s athletics department and help elevate educational opportunities, scholarships and learning facilities at the college.

“I’m a Food Network junkie,” said Heather Mitchell, executive director of the TCC Foundation who sees chef Zakarian as one of the best in the business. “He’s so affable. When he came here, he said, “What can I do for you, for the school?’ ”

When Zakarian arrived at Tallahassee Community College on Thursday, March 4, he busily worked on stage getting ready for his cooking demonstrations and took time to talk with me about a range of subjects, displaying his trademark wit, conviction and charm. Despite his public persona, the restaurateur is also a businessman, author and humanitarian.

As the chairman of the City Harvest Food Council, he launched two telethons during the pandemic.

“It’s the largest food rescue operation in New York and one of the largest in the country,” said Zakarian.  “We rescued 90 pounds of food and gave it away, all free, no government assistance. Fifty-five percent was fresh vegetables so we don’t give away crap.”

Zakarian, who also has a content production company called Corner Table Entertainment, has worked on a documentary, “a love letter to New York” to look at the pandemic’s impact on the beleaguered restaurant industry.

“It started in March or April and now it’s finishing up as restaurants are starting to open,” said Zakarian, who has been teaming up on the project with Tribeca Productions. “I’ve been in New York for 40 years and anyone who knows me will tell you I have a love affair with the whole aura of restaurants, what they mean, theatrically, and not just the food.”

It’s the whole production, he stressed. Since he became a chef, “restaurants have become experiential,” he said.

“It’s like a show. The curtain goes up three times a day and it better be good,” said Zakarian. “It’s Broadway. That’s how I look at the industry and how I fell in love with it. If you don’t have the lighting right, the sound isn’t right, the mood’s not right, the greeting’s not right then I don’t care how good you are, it’s not going to be your vibe.”

Zakarian should know. He’s the owner of the restaurants, The Lambs Club and the National Bar & Dining Rooms, in New York City and the Royal Point and Counter Point restaurants inside the Diplomat Beach Resort in Hollywood. They’ve all temporarily closed since the pandemic hit but Zakarian estimates he’ll reopen at the Diplomat in the summer. He expects to open his Times Square restaurants at a later date. When tourism returns to the city is a big factor for all restaurateurs.

He estimates that at least 30 percent of the 25,000 restaurants in New York City will remain closed. Takeout has helped, he said, but “we need the hospitality to come back. We need to sit in restaurants,” said Zakarian, who was planning to dine at Mimi’s Table after his cooking demonstrations.

He predicts the restaurants that survive “will have a gangbuster year.”

Despite the pandemic, the year has brought bright spots. He and his two daughters wrote a cookbook, The Family that Cooks Together. His other books have been Cast Iron Cooking: The Dutch Oven, My Perfect Pantry and Town | Country.

The Family that Cooks Together  features 85 home recipes, written by his daughters, Madeline, 13, and Anna,11, with son George, 6, participating as well.

For his kids, “it’s been a great experience to have a book become a bestseller when you’re 12, and it happened because of this (pandemic). They’re invited on TV shows without me,” said Zakarian with more than a hint of pride in his voice.

He and his family, normally living in New York City, moved to Tampa when Covid-19 caused massive shutdowns so his children could attend classes in person.

“It was a blessing,” said Zakarian. “You never get to spend time with your kids. My dad never spent time with me because he was always working. I worked like a maniac.”

Zakarian pivoted from studio to home kitchen, doing segments on the QVC channel for his line of kitchen products, called Pro For Home, filming segments of The Kitchen and other efforts and working on this book with his children.

He’s also pleased that The Kitchen shows filmed at home in Tampa “had the highest ratings for the show in six years” even though it went from a staff of 100 to two — Zakarian and his wife, who served as the producer and filmed the show.

Zakarian had a degree in economics, but before getting his MBA, he went to Europe and fell in love with food. “Everything was fresh and perfect,” he said. “Being a chef found me.”

But when the young chef Zakarian started out in the restaurant business, he worked  hundreds of hours without pay as a young apprentice, learning and loving the craft. He graduated from the Culinary Institute of America and began working at Le Cirque, learning under French master chef Alain Sailhac, one of his mentors along with famed chef Daniel Boulud.

In 2001, Zakarian opened his first restaurant, Town, which was awarded three stars from the New York Times. He won a James Beard Foundation award for Chopped.

Despite the challenges of the last year, Zakarian remains an optimist.

“When you’re in the restaurant industry, you’re never bored.”

Zakarian said he’ll come out of the pandemic stronger. “How do I feel? I feel great!”

Top picture by Alicia Devine of The Tallahassee Democrat.