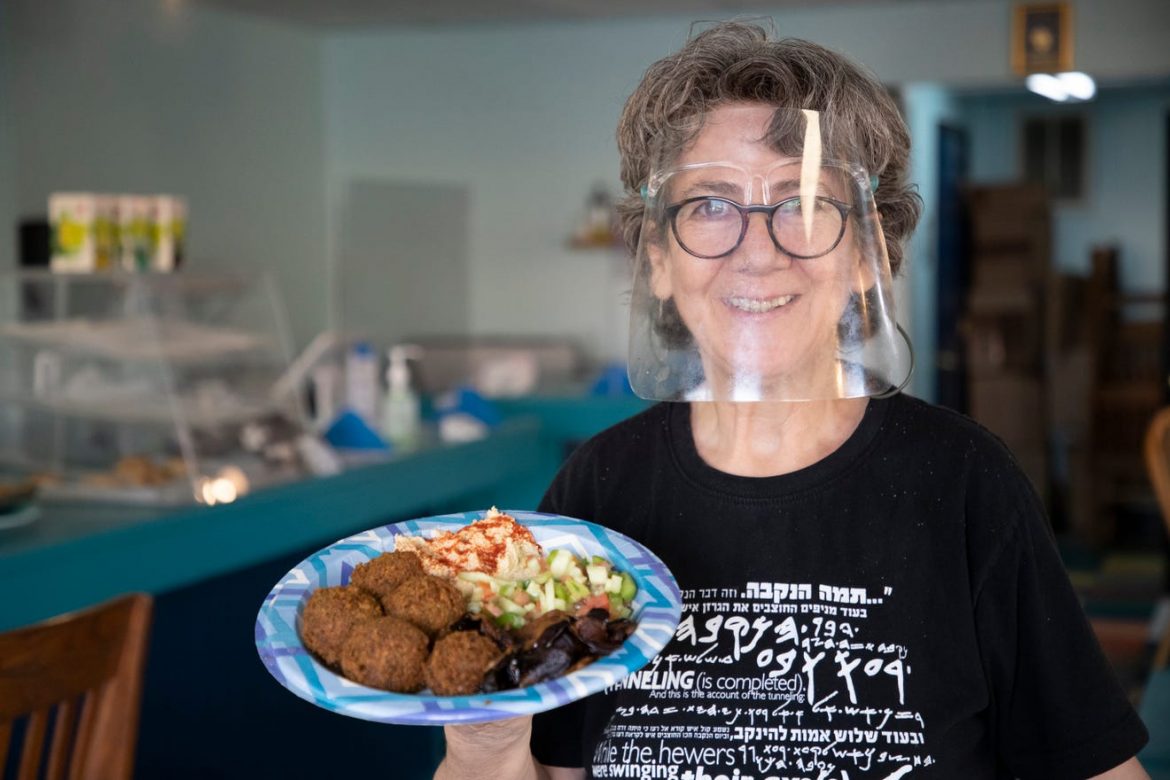 Owner Magi Mekaiess brings flavors from her homeland, with Passover specialties coming up.

When you walk into Cafe Yerushalmi, you’ll be greeted by the aromas of sizzling oil and fragrant spices. To me, it smelled like childhood, like memories of holidays and family gatherings. Tradition!

The cafe, the only full-service kosher restaurant in Tallahassee that I know of, had its grand opening on Sept. 2, but you don’t have to be kosher or even Jewish to appreciate the homey fare prepared by chef/owner Magi Mekaiess.

“People like the food,” said Magi. “When I make matzo ball soup, everyone loves it.”

The restaurant has been drawing a steady stream of customers, and not surprisingly, a good number are students since the restaurant is located on Lake Bradford Road near Doak Campbell Stadium.

Cafe Yerushalmi is a casual nook with a few picnic tables outside. During the pandemic, it’s also been a popular choice for takeout. The restaurant closes from Friday afternoon to noon Sunday in line with the Jewish observance of Shabbat, which marks the day that God rested after creating the world.

The name Cafe Yerushalmi says a lot. One of the meanings of Yerushalmi, Magi said, is a person of Jerusalem.

She was born in Jerusalem, and came to New York 25 years ago. Magi has been in Tallahassee about a dozen years and while this is her first restaurant, she said “I have been cooking all the time.”

A professional caterer, Magi touts her recipes as “authentic food from the heart of Jerusalem.”

At Hanukkah, diners enjoyed specialties like potato latkes and jelly doughnuts. As Passover or Pesach approaches, customers who want a kosher meal for a seder or a family dinner can order food prepared in advance. Magi will close the restaurant during High Holidays 5781, the current year in the Jewish calendar, but she will be cooking a lineup of dishes for catering.

The menu will include brisket, but Magi will be using the second — succulent deckel — cut of beef, which fans consider “brisket nirvana,” food columnist Melissa Clark wrote in the New York Times.  Magi prepares the meat with plums, onions and red wine.

She’ll also offer roasted chicken — Moroccan style with sweet paprika, onions and fresh tomatoes or the Yom Tov Special with date syrup and onions — Moroccan meatballs and salmon or tilapia with a range of salads and sides such as mashed potatoes with fried onions, roasted vegetables and pashtida, which is an Israel crustless quiche with eggs, potatoes, carrots, parsley and onions.

Passover starts at sundown March 27 and ends Sunday evening, April 4. The holiday commemorates the exodus of the Jewish people from slavery in Egypt. Seders are held the first night, and often the second, to tell the Passover story and celebrate freedom.

One item you won’t find at any sedar is bread because in their haste to escape Egypte, the Jews did not have enough time to wait for bread to rise. Instead, they ate matzo or unleavened bread.

But on the regular (nonholiday) cafe menu, Magi features pita sandwiches and items like  vegetarian Moroccan “cigars” (meat or veggies wrapped in light pastry) and bourekas (pastries made of flaky dough with different fillings.)

On busy days, you may have to wait a bit for your order. Magi, a petite powerhouse, does just about everything herself.

We’ve savored entrees like chicken schnitzel, falafels and beef kebab on a plate with pita and two sides. My husband and I have had takeout at the cafe a few times and happily devoured every bite.

If you’re a hummus fan, the cafe’s version was notable for its rich, creamy goodness, some of the best we’ve had. You’ll find several hummus combos, including a basic plate with chickpeas, hard-boiled eggs, tahini and pickles or hummus with shawarma (turkey), tahini and pickles.

You can graze simply on starters, like the soup of the day — often matzo ball soup — stuffed grape leaves or a bourekas plate. The bourekas,  some of my favorite dishes at the cafe, are an Israeli street food.

Magi makes three types of bourekas, filled with spinach, potatoes or mushrooms. They’re different shapes so you can tell what you’re getting. The potato ones, for instance, are rectangles while the spinach are round. We ordered a variety, 10 in all, and gobbled them over a few days, reheated in the toaster oven.

On my next visit, I’m eager to try shakshuka, a dish of North Africa with variations in Israel, Egypt and other Middle Eastern countries. The dish features two poached eggs in a sauce of tomatoes, green peppers and onions with pita. And I plan to load up on Magi’s baklava.

You don’t have to be Jewish to become a fan of Cafe Yerushalmi, but for anyone who keeps kosher, it’s bound to be a bonus.

“People are really excited to come here,” said Magi. “They say, ‘wow a kosher restaurant. We’ve been waiting for this.’ “

Passover information: Owner Magi Mekaiess said she can accommodate orders for smaller parties of four as well as six to eight or 10 to 12. Orders are accepted until March 18. While the restaurant will be closed for dining starting March 22 customers can pick up their catering orders on March 25 (the cafe will be open until evening for pickups) or March 26 (open until 3 p.m.). The restaurant will reopen after Passover. Check the cafe’s Facebook page for prices and details. facebook.com/CAFE-Yerushalmi-1655352081381370