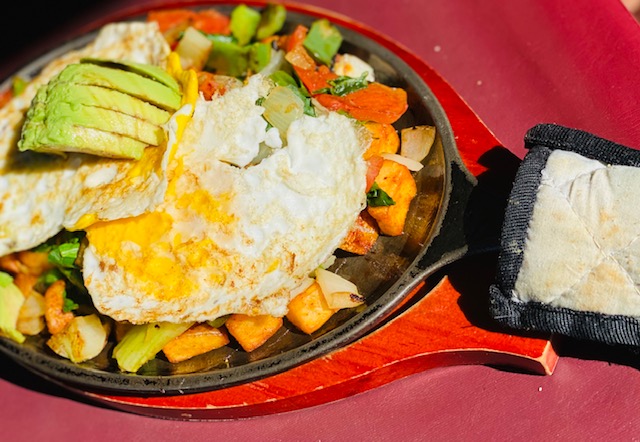 Along with its colorful name, The Bada Bean is known for its all-day breakfast, deli sandwiches, homey entrees, extra thick bacon and cinnamon buns.

Owned by Wendy and Alan Neubauer, the restaurant has been open since 2007. Wendy’s goal: To serve food that’s yummy and original.

Bada Bean is an original in many ways. The place has a kitschy feel with drawings of flappers, a poster from the first “Godfather” and the famous mug shot of a young Frank Sinatra after his arrest in 1938 on charges of carrying on with a married woman. As for the gangster theme: “Gangsters are usually very close with their family and momma cooks nice big meals,” jokes Wendy.

There’s inside and outside seating, with a few tables in front and a small patio with picnic tables. Since the pandemic, Bada has added a few plastic floor-to-ceiling separators between some tables.

Wendy said three of the black-and-white watercolors were done by local artist “Autumn Delaney Art.” “They are meant to be a remembrances for my children when we are no more. The photo are of my three children, Jacob, Shane and Amber. Jacob runs the front, Shane works part time while he is finishing law school, and my daughter worked here through high school.”

The menu: A favorite is their Eggs Arnold Benedict with an excellent homemade Hollandaise sauce, above, and grilled vegetables instead of Canadian bacon (though you can get that, too) served with well-seasoned home fries. Other highlights are their Skillets, served in a sizzling cast iron skillet (pictured), pancakes, French toast, omelets and other breakfast classics as well as lunch — all topped off with Lucky Goat coffee.

“We crack every egg, no liquid eggs, no frozen eggs. We use extra thick bacon because my husband loves bacon,” said Wendy. “Our helpings tend to be on the larger side because my Dad used to say if it wasn’t enough to fill him up it needed more on the plate. He was a good eater. I can honestly say sometimes I wonder if a single person can really finish our ‘Tin Lizzy’ omelet.”