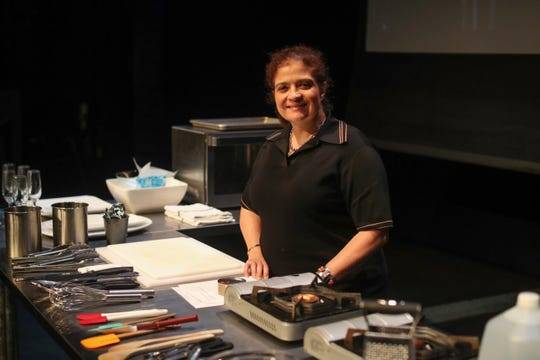 As an Iron Chef and a longtime judge on the Food Network TV show, “Chopped,” Alex Guarnaschelli has come across a wide range of offbeat ingredients, from stinky tofu to gummy eggs over easy.

But this week, she was excited about another assortment of fresh, more familiar foods – “duck, beautiful agrodolce onions, radicchio and a caramel syrup made with local eggs.”

These were some of the ingredients in the four-course meal she was preparing Friday night for Tallahassee Community College’s fourth annual Cleaver and Cork: A Farm to Table Wine Affair at Pearl in the Wild.

“We’re using a lot of locally sourced ingredients,” said Guarnaschelli, who is also the executive chef of the New York City restaurant, Butter, and the host of her own Food Network show, “Fix Me a Plate.”

The TCC benefit was a two-night affair. On Thursday night, Guarnaschelli presented a cooking demonstration at TCC’s Turner Auditorium, sharing recipes from her cookbooks, “Old-School Comfort Food: The Way I Learned to Cook” and “The Home Cook: Recipes to Know by Heart,” talking about her multifaceted culinary career and answering questions.

Proceeds from the TCC Foundation’s signature event will go toward the renovation of two college art studios, said Heather Mitchell, the foundation’s executive director. Even better: “Dollars will be matched” by a private donor, she said.

Guarnaschelli fit the bill for the type of entertaining foodie the event aims to feature each year, said Mitchell.

“She’s phenomenal. She’s on three or four shows, I’ve seen her do cooking demonstrations, and I knew she was the right person for what we’re doing this year.”

Guarnaschelli does pop up on a variety of Food Network shows, including “Beat Bobby Flay.” She beat him but “we don’t talk about that – shhhh!”

Before she met Flay, Guarnaschelli said she wasn’t a fan of the celebrity chef. “I was wrong. He’s wonderful.”

“He doesn’t want to know. They (his crew) would love to tell him but he refuses. When you realize that, it makes it more unbelievable.”

Guarnaschelli is probably best known as the sharp-witted, straight-talking food judge on Chopped, which she calls “the Jeopardy of the Food Network.”

On the popular cooking show, four contestants compete to create dishes utilizing a mystery basket of ingredients for a chance to win $10,000.

Guarnaschelli has been a judge on the nail-biting competition for 10 years.

“If I’m alive, I’ll be on the show. That’s my master plan,” she quipped, taking time to talk in the TCC Turner Auditorium before her cooking demonstration Thursday night.

Guarnaschelli said she “really enjoys” being a judge but “I don’t like it when people are discouraged when they don’t win. There should be more than one reason for them to be on the show. There’s a 75 percent chance of losing in Chopped and I don’t think people remember that.”

She said she sometimes tries to talk to contestants after they’ve lost “but sometimes they don’t want to talk. Sometimes it takes a while for them to know how they feel, how to process. Some may get out of bed a week later, and say I’m so upset.”

Guarnaschelli understands firsthand the drama of being a contestant in a cooking show.

“The show took about two months to make so we were all pretty shredded and sleep deprived, frazzled,” said Guarnaschelli. “You stand in front of judges and pray you don’t get eliminated.”

When she won the title, “It was one of the most validating moments in my whole life, to be honest, and I don’t think that will change.” She still feels a surge of pride when her daughter, Ava, 11, puts on the video and they watch the show together. “Sometimes she’ll say ‘You did it, mom!’ ”

Guarnaschelli’s love of food goes back to her own childhood.

Her mother, Maria, edited the 1997 edition of the beloved cookbook, “The Joy of Cooking,” among other cookbooks.

Chef Alex Guarnaschelli lived and trained in France, and says these are the staples of French cooking — and eating — to her.

“There was so much cooking, and so much talking about food,” said the native New Yorker. “My father also loved food – it was one of his great passions. Food was always very important in my house, growing up. My mother cooked so much.”

She may be in the epicenter of the food world, but Guarnaschelli is truly a home cook and likes to share her dishes and tricks. Just check out the “Go Ask Alex”  section on her website, https://alexguarnaschelli.com.

While she enjoys cooking with ingredients like edible flowers, she notes that sometimes diners just want “chicken and mashed potatoes.”

“I think a menu always should have that, the classics, and a green salad and a good soup.”