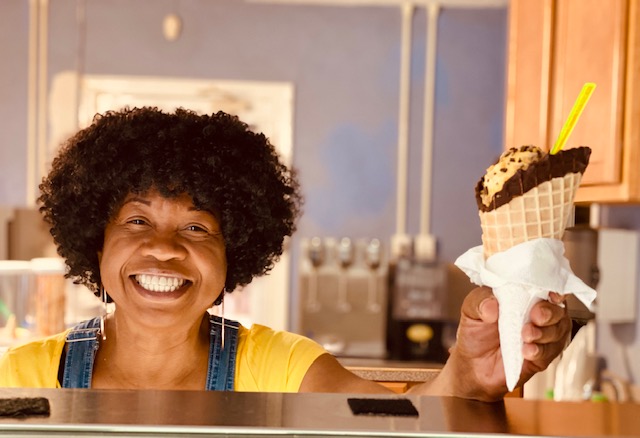 Here’s the scoop: The Network’s magazine chose the Tallahassee gourmet shop as the favorite for the state, just in time for National Ice Cream Month.

If you’ve ever been to Barb’s Brittles, nestled among the cottages of  Lake Ella, you won’t be surprised by this news: The homemade Chocolate Sunflower Brittle Ice Cream created by owner Barbara McGarrah is officially a winner.

The unique ice cream flavor has been picked by the Food Network as part of its “50 States, 50 Scoops” tour  featuring “the most amazing flavors in each state” just in time for the start of National Ice Cream Month, which begins on July 1 (July 18 is National Ice Cream Day. )

Barb’s chocolate sunflower brittle was the Food Network’s choice as the favorite in Florida.

“I’m excited,” said Barb, who said she was still processing the announcement.

This national recognition comes as Barb’s Brittles celebrates its 20th year in business. For two decades, Barb has been known for her many types of homemade brittle, which also stars in her homemade ice cream, cookies, candy, pies, popcorn and pralines.

“I think the ice cream is going to make the brittle even more popular,” she said.

I had a scoop of Barb’s Chocolate Sunflower Brittle ice cream in a waffle cone this week and it truly is amazing, just as the Food Network has proclaimed. It’s made with a vanilla base mixed with the brittle, so you have the delightful crunch of the sunflower seeds and the candy. It’s scrumptious.

Barb, who isn’t one to brag, never expected to be in the brittle business. She has a degree from Florida State University in fashion design and she made custom suits for professional women in Tallahassee.

She was only thinking of brittle as a way to please her family.

Her father roasted peanuts for 25 stores in Orlando and she developed a knack for making tasty brittle for holiday presents. “I have 35 nieces and nephews, five sisters and five brothers,” said Barb.

That’s a lot of brittle.

She eventually stopped making the candy because it was hard to find the quality peanuts she needed. Then her father had an idea.

Barb didn’t want the peanuts to go to waste so she made brittle for her relatives. Then, with 50 pounds of peanuts still left, she wound up making more  brittle to sell at a fair at the Tallahassee Senior Center.

“My thinking was ‘I had to make good with these peanuts,’ ” said Barb “I have a large family and you learn to be frugal. You don’t throw anything away.”

The customers who bought her brittle at the senior center told her of their fond memories of eating brittle as a kid or remembering a parent or relative who craved the confection.

“We got so many compliments,” said Barb.

She still had peanuts left so she then sold more brittle at a Bradley’s Country Store fair and sold out once again. Later, a Havana store asked to carry the candy.

Each step took her closer to the realization that her brittle was a hit.

“I didn’t know exactly what was happening with the candy but I thought if it was meant to be, it will work out,” said Barb. “If not, it will weed itself out.”

It never did, though.

Fast forward a bit and Barb opened her shop in Lake Ella, which had the homey atmosphere she loved while still giving her a good business location.

As for her fashion skills, “I realized that, at the end of the day, my creativity wasn’t limited to fashion.”

She liked the idea of being able to make so many customers happy with the treats she concocted.McGarrah started with peanuts, but now she uses all types of nuts, including, cashews, almonds, pecans, pistachios and macadamia nuts.

McGarrah started making brittle using sunflower seeds after a regular customer at her booth in the Downtown Market made the request. “She said ‘Barb, I love your peanut brittle but I can’t eat the nuts.’ She said she spit out the nuts.”

The woman asked McGarrah if she could make brittle with sunflower seeds. McGarrah was dubious but it turned out the seeds created a wonderful brittle. She brought it to the Downtown Market and nine bags were immediately sold. MGarrah saved the 10th bag for the woman who made the request.

McGarrah’s desire to think creatively helped her during the pandemic. While she cut back her hours, McGarrah learned to switch gears, working on her website orders and finding ways to continue.

“You have to adjust to keep the business going and at the same time prepare for the future,” said McGarrah. “You have to work smarter, not harder.”

As for making a favorite Florida ice cream, McGarrah is humble.

‘I  have high standards for everything I do,” she said. “It’s a great honor.”