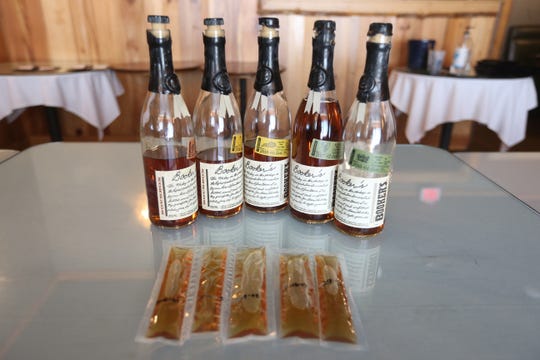 When I wrote this article, restaurants were the only venues offering togo alcoholic drinks — now that bars and breweries have been ordered closed for the time being, these venues are also offering cocktails, wine and beer to go. You can also order gift cards, gifts and other items to help keep your favorite places afloat.

It was a do-or-die moment for many businesses. When Gov. Ron DeSantis announced in mid-March that restaurants could only offer takeout because of Covid-19, there were decisions to be made.

The governor’s executive order lifted the restrictions that prohibited specially licensed restaurants from selling packaged alcohol for delivery, take-out or consumption off-premises. Customers still need to present their I.D. when buying alcohol with their pick-up or delivery orders (that’s true even if you buy beer from the supermarket).

“We saw the (governor’s) order and we started selling batch cocktails that Friday night,” said Danny Renninger, director of operations for Sage and Il Lusso. “We just rolled with it.”

Customers have liked the idea as well.

When Sage first concocted 40 quarantine cocktail kits, each supplying bottles of eight cocktails — one for every night with a bonus — “we sold them all,” said Renninger. The drinks were between 4 to 8 ounces with one normal drink size. You’ll find drinks like a bloody Mary, passion fruit margarita and an Old Fashioned.

But Sage is far from alone in offering drinks to go. Many restaurants have joined the takeout cocktail craze, which has become a national trend. We can’t go to bars but we can have dinner and a cocktail made by pros. And we can savor it all while in our sweats lounging on the couch.

You may make a mean martini in your home bar, but restaurant cocktails are generally featuring an added shot of sophistication most of us can’t duplicate.

“You can be at home and try our take on an espresso martini with chicory liqueur,” said Bonita Violette, the wine and spirits manager at Cypress Restaurant, which is offering cocktails to go with all the garnishes.

“Sometimes when we’re making vacuum-sealed drinks, I’m struck by this: Is it the future?” said Violette.

At least the immediate future, it seems.

Offering takeout cocktails has enabled Cypress to keep at least one bartender working. ‘We’re just trying to make the best of it and escape the nuttiness of what’s going on,” said chef David Gwynn, owner of Cypress with his wife Elizabeth. “You have to be creative.”

The venue sells craft beer, draft or package, and wine by the bottle to go but the star of the bar has been its housemade, seasonal sangria. The new flavor is a tropical pineapple coconut sangria with a wine base of Pinot Grigio.

Drawing customers to Railroad Square has been a challenge because of shutdowns caused by Covid-19, drastically reducing the visitors to the All Saints District and College Town.

Coping with the sudden shutdown “has been a complete blow to us,” said Spells.

The Railroad Square Craft House opened in August as a bar, music and event venue but added a restaurant in November.

“We were just picking up steam,” she said. “Our best months were January and February. But we’re very happy that we moved in that direction.”

Gordos sells its trademark rum punch, Smash, by the gallon along with margaritas.

Takeout drinks are likely to be especially popular next week with Cinco de Mayo coming up. But it can seem like a party everyday — at home — if you’re a fan of the tiki drinks at Waterworks.

The Midtown bar/restaurant features batches of its tiki drinks for takeout and as a surplus, you also get paper umbrellas and empty plastic tiki glasses you can fill when you get home, said owner Don Quarello.

For restaurateurs, being convenient, creative and clever has become key for survival.

“We’re trying to reinvent ourselves every week,” said Sage’s Renninger. “We have such a wonderful community that’s supported us through this endeavor.”

Whatever the format drinks are sold in — whether tightly capped bottle, vacuum-sealed package or gallon jug — the message from restaurants is this: Please enjoy alcohol in the comfort of your home and do not drink and drive.

Below is a list of several restaurants offering drinks to go. Call for hours and more details. To submit other locations, email us at [email protected]

Blu Halo: The fine dining restaurant and bar offers Blu’s Booze To-Go. The cocktail list features a half-dozen choices including the Blu Halo Cosmo, Last Days of Summer (with Western Son cucumber vodka) and a grapefruit sour. Prices range from $30 to $45 for four to six servings. Blu Halo also offers bottles of wine and beer to go. Orders can be placed online at thebluhalo.com or by calling. Bannerman Crossings, 3431 Bannerman Rd.; 850-999-1696.

The Edison Restaurant: The Cascades Park restaurant and bar is serving a full cocktail menu, beer and wine to go from its downstairs Power Plant bar. 470 Suwannee St.; 850-765-9771.

Food Glorious Food:  The restaurant is offering its cocktail menu to go, which includes popular drinks like the Banana Bread Old Fashioned, the Blood Orange Margarita and the Basil Lemonade Cucumber drink with Hendrick’s gin. You can also buy bottles of beer and wine. It won’t give you an alcoholic buzz but FGF also makes a killer banana pudding with Plantation 3 Stars rum.  1950 Thomasville Rd.; 850-224-9974.

Georgio’s Fine Food & Spirits: The fine dining restaurant, open for more than 50 years, features an extensive cocktail menu to go, as well as quarts of rum punch, margaritas and red sangria along with beer and wine specials. Georgio’s serves European, Mediterranean and American cuisine, which you can order as individual or family meals. 2971 Apalachee Pkwy.; 850-877-3211

Hobbit American Grill: When you buy takeout burgers or wings to go from the sports bar you can also grab a gallon of a cocktail or draft beer. All three Hobbit locations are offering gallon-size servings of cocktails including Long Island Iced Tea, margarita, Renegade lemonade or request a gallon or half-gallon of your drink of choice. The cost is $25 a gallon for well drinks and $40 for top shelf. A mimosa package, for instance, includes a bottle of champagne with 16 ounces of orange or cranberry juice. You can also get a gallon of alcohol combined with a family meal plan. East location, 400 Capital Circle SE (850-402-2900); West location, 2020 Pensacola St. (850-576-1009); South location, 5032 Capital Circle SW (850-942-4505).

Jeri’s Midtown Cafe: The cozy cafe, known for its brunch menu and lunch lineup, is offering takeout red and white sangria for individual servings or by the gallon, wine by the bottle, beer and prepared, packaged mimosas. 1123 Thomasville Rd.; 850-385-7268.

La Tiendita Mexican Restaurant:  Customers can check out La Tiendita’s new Sangria de Jamaica, otherwise known as Hibiscus Sangria, which is made with sun-dried hibiscus flowers, in 16-ounce and 32-ounce sizes. The restaurant also offers its regular sangria and margaritas to go as well as a selection of domestic and international bottled beer. Expect specials for Cinco de Mayo. 1840 N. Monroe St.; 850-523-1494.

Madison Social: The venue offers 32-ounce cocktail crowlers plus some signature drinks, including the Madison Mule, Higher Line and margarita for $20 as well as smaller, specialty selections. For Cinco de Mayo, Madison Social is offering a kit for a quarantine fiesta that includes a Marg Vibes T-shirt or tank top, a 32-ounce margarita crowler plus a barbacoa burrito. Order at madisonsocial.com/marg-vibes and pick up at the restaurant and bar between 11 a.m. and 5 p.m. May 5. Madison Social has joined with Sage to present the Tallahassee Cocktail Club. The restaurants will take turns offering two cocktails each week or 10 cocktails for the month of May.  (FYI, there are five Fridays in May). You can choose a pick-up membership for $80 and a delivered membership for $105. Find out more at madisonsocial.com/tallahassee-cocktail-club. Madison Social has also teamed up with Tally Mac Shack to establish an “adult ice cream truck.” It comes into a neighborhood and instead of selling ice cream sells booze and bites. It’s called the Tipsy Dog. It will launch on May 8. If you want the truck to come to your neighborhood, let them know. 705 S. Woodward Ave.; 850-894-6276

Railroad Square Craft House: The restaurant and bar is known for its seasonal sangria. You can buy a gallon of the current flavor, pineapple coconut, for $25 for a gallon. The Craft House also sells craft beer, draft or package, and wine by the bottle 644 McDonnell Dr.; 850-296-3496.

Sage: A Restaurant: Sage offers many cocktail options, including flights with a destination theme. You may not be flying to Barbados but you can order a tropical drink lineup with Plantation Pineapple, 18-year-old rum Don Pancho,  Foursquare Premise, Bumbu and Papas Pillar. Other flights include a U.S. whiskey tour or one to Guadalajara.  Flights range from $35 to $65. There’s also a long list of 750ml curbside cocktails which have four to six servings and there are bottles of wine for sale. 3534 Maclay Blvd.; 850-270-9396.

Table 23: The Southern-style restaurant, with its sprawling outdoor patio, is selling $5 bottles of house wine with a $50 order. All other bottles of wine are $10 off. You can also get the fixins’ for a mimosa with bottles of champagne and orange juice. 1215 Thomasville Rd.; 850-329-2261.

The Scoop on TLH Ice Cream

What’s the scoop? A new ice cream parlor in Tally.