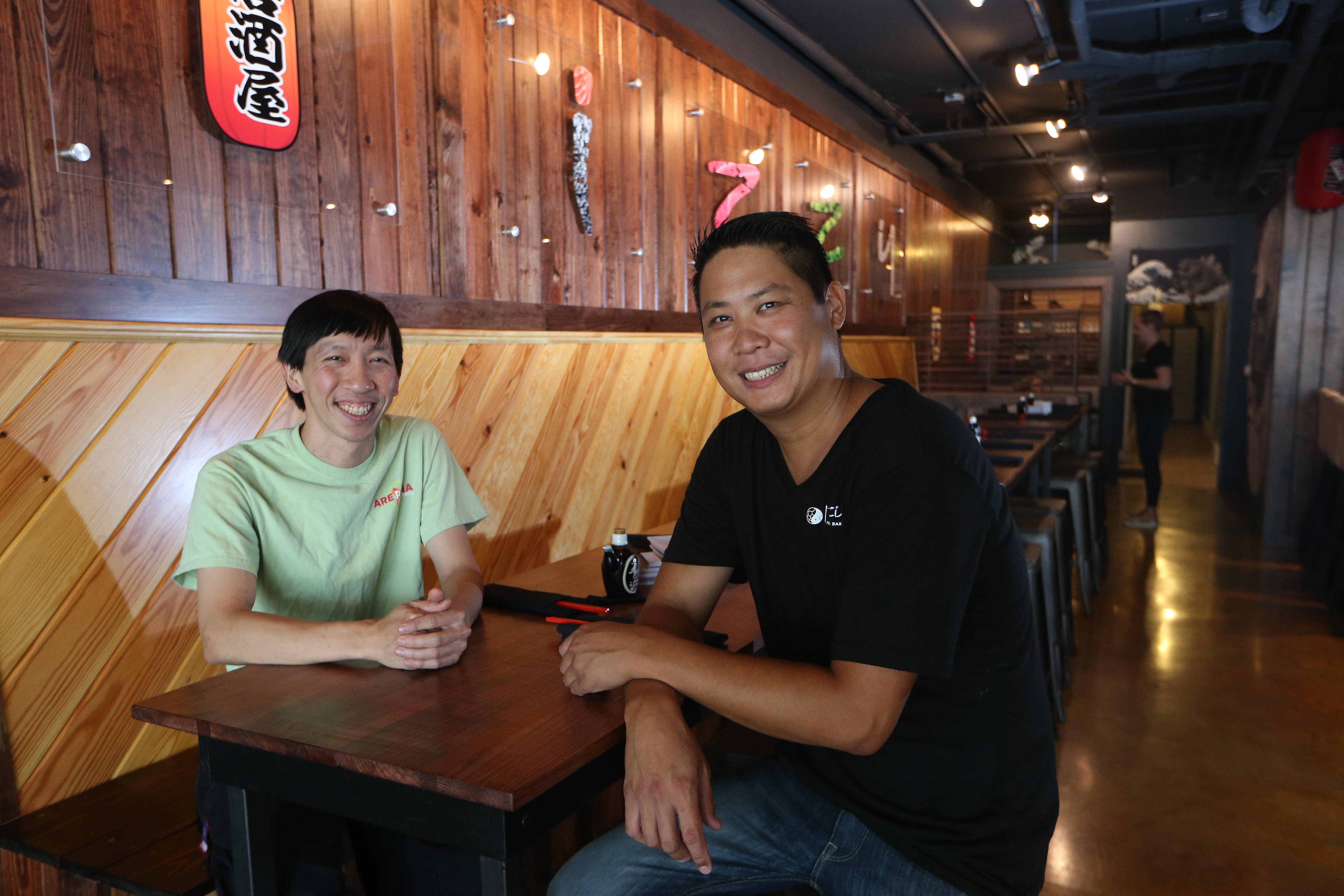 You may not know Viet and Nam Vu, but you’ve probably eaten at their restaurants.

They’re the guys behind the MoBi food truck, known for its international street fare, and Midtown’s popular Taco Republik, which has been serving a variety of tacos, quesadillas, burritos and other Tex-Mex-style food for more than four years. 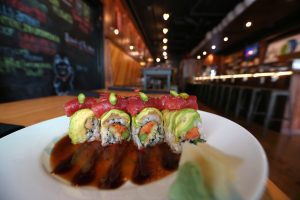 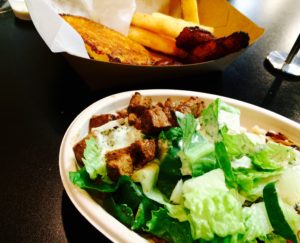 A choclo, top, an arepa filled with cheese and sweet corn with sides of plantains and yuca fries (top) and a steak and rice bowl (bottom.)

As if all these ventures aren’t enough to keep them busy, the Vus recently revived MoBi, which had been relegated to limited use, as a regular pop-up on weekends at Proof brewery in Railroad Square, offering items like Garnet & Gold tacos, sweet corn arepas stuffed with cheese and pub fries garnished with chopped bratwurst and 850 beer cheese, with more creative items to come. MoBi, which means Mobile Bistro, will also be handling all of Proof’s catering and food operations. 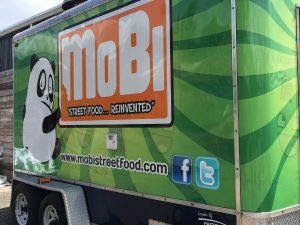 The Vus initially started the food truck in 2011, after more than a decade of working for others in restaurants around town. In just six years, they’ve quietly impacted Tallahassee’s evolving dining scene, and they’ve done it with lots of sweat equity.

The Vu brothers were willing to start small, but they’ve always had big dreams. Talk to them briefly and their enthusiasm is catching. They’re brimming with ideas, tempering their passion with  pragmatism.

“It all springs from our background,” said Viet. “We got into this because we learned a love of food from our parents.”

Children of Vietnamese immigrants who came to America “with next to nothing,” the Vu brothers grew up in Tallahassee at a time when there were few other families who shared their culture.

“Probably less than five percent of the kids in school were Asian,” said Nam. “The majority were Korean and Chinese.”

The brothers learned early on to handle questions about their names, Viet and Nam. “Our parents were jokesters,” Nam quipped, adding their dad explained “it was a way to always remember our heritage.”

Viet and Nam  were raised in a multicultural world, dining at the homes of American friends, and inviting those friends to join their family for traditional Vietnamese dishes.

Their mother made banh xeo or Vietnamese crepes, dumplings and summer rolls. Their father, who worked with the state Department of Transportation, proudly made his homeland’s famed phò beef noodle soup as well as the spaghetti and meatball recipe he learned from his American co-workers.

“Our version of a bolgona sandwich in school was actually French bread, pâté, camembert and chả lụa,” a type of sausage used in Vietnamese bánh mì sandwiches, Nam said. “That was our sack lunch.”

When the guys attended Leon High, they also ate at Whataburger a couple times a week, never expecting they’d be Midtown merchants themselves. Or maybe they did.

Between them, Viet and Nam have worked in just about every job in the restaurant business, starting at the bottom and working their way up.

Viet got his first job at Papa Johns in ’96, flipping pizzas and taking orders for $4.25 an hour and free pizza. “Great job for a swimmer with an appetite for pizza and cooking,” said Viet.

When Nam was in high school, he worked summers as a prep/pantry cook and bussed tables. at PF Chang’s in North Carolina.

“PF Chang’s was the hot new restaurant at the time, and we were inspired by both the menu and design,” said Viet. “We were like, ‘wow, Chinese restaurants don’t have to look like the typical mom and pop take-out joints.’ ”

After graduating from Leon in 1998 and 1999, the brothers went to Florida State University with a medical or science career in mind. “We were originally the stereotypical pre-med that Asian parents want for their children,” said Nam. He ended up gravitating to international affairs. Viet’s majors were biology and chemistry. 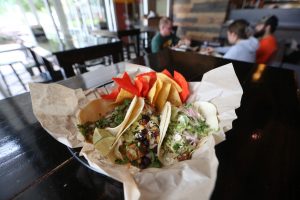 A three-taco combo with one of each carnitas, pollo and steak at Taco Republik, one of several local restaurants owned by brothers Viet and Nam Vu. – Joe Rondone, Tallahassee Democrat

Both brothers worked in restaurants while at FSU. Viet worked a a bar manager at Mori and Harry’s during and after college. Nam worked at Bonefish Grill  during college, and after graduation, he managed 101 restaurant (“I was the unofficial creator of buffalo chicken pizzas). He later went on to management at Hotel Duval and Shulas

As an aside, he mentions that Nam would “do magic tricks when he was a server and the guests loved it.”

When Lemons opened Table 23, across the street from Taco Republik, Nam offered to help with staff training, calling it “a way of giving back for the many lessons I learned while at BFG.”

When he was learning the business, Nam said he liked to work at newly opened places to observe how things were done.

“We had good bosses and bad bosses and we learned from their strengths and weaknesses,” said Nam. “We learned what works and what not to do.”

“We’re like sponges,” said Viet. “We learned from all our families we spent time with – Vietnamese, American and work. Over the years, I believe we’ve been absorbing it all. We try to apply every little experience that we’ve learned and shake it up.”

Nam said he and his brother played a game when they were dreaming up restaurant concepts. “Any time we’d see an empty space, we’d say “What would you put there?’ It kept us thinking.”

Eventually the brothers would go out on their own – after some soul searching. When Viet was nearly 30, he decided to leave his job as a bar manager. He traveled the country, visiting his foodie sister, Phi Do-Lui, in Albany, California. Viet was “in love with” the dining scene in the San Francisco Bay area, visiting his sister’s favorite eateries, which included casual places and imaginative food trucks.

“For me, great food doesn’t have to be fancy,” said Do-Lui.“

“The food truck idea was a very cool concept to me,” said Viet.

After a year of research and a loan from their mom, MoBi was born. 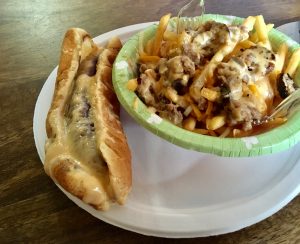 Brat dog and pub fries with 850 cheese sauce from the MoBi food truck.

“I utilized my bar and hospitality networks to find places to set up late night outside bars and lunches downtown,” said Viet. “We created a Carolina-style barbecue pork taco with Chipotle mac-n-cheese and it jump started our business.”

Natasha Nunley, a managing partner at the new Tin Lizzy’s, was running her own food truck, the Nole Patrol, one of Tallahassee’s first food trucks, when Viet was traveling around the city with MoBi.

MoBi allowed the brothers to experiment with global flavors – Korean (with kimchi from Korean BBQ), Indian and Thai, introducing customers to Vietnam’s famed bánh mì sandwiches, with a smear of liver pâté and thin slices of cold cuts on a French baguette.

“We never had a set menu,” said Viet. “People knew we always had the barbecue tacos and some new Asian stuff and they always loved it.”

One of those fans was Florida State University graduate student Cameron Salley, who headed to Proof on a recent steamy Sunday with senior Lily Henkel to devour barbecue pork tacos.

“I used to go to MoBi when I was in high school,” said Salley. “We saw a post from Viet today on Instagram and came on over.”

“He wanted us to build a taco shop, develop the menu and staff it,” said Viet. “It was the opportunity to open our first restaurant, our way, with minimal investment. Once we accomplished that, it gave us the confidence to do even more concepts.”

Viet and Nam formed the parent company, RendezVu, but it would be more than four years until they found the right opportunities for more businesses.

That changed when Viet entered into a partnership with chef Fang of Midtown’s Saki Sushi to help revitalize the restaurant with a new concept. Fang is a talented chef, said Viet, but Saki Sushi “was missing the ambiance and the vibe necessary to succeed in the rising Midtown scene and we knew we could help bring that.” 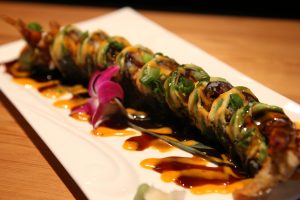 They created Izzy, short for Izakaya (a casual venue for drinks and simple pub food), a hipper space which has already made a difference for Tallahassee’s adventurous raw fish fans, even new ones.

The pub, which shares a deck with indie bookstore Midtown Reader, has become a gathering spot for diners chowing down on an array of sushi, sashimi and small plates, sipping high-quality sake — including the first kegged sake in Tallahassee — and local craft brews from Proof, Deep and Grasslands.

Izzy has offered at least one high-end omasake dinner – the term means “I’ll leave it up to you” – sourcing rare, unique fish from the famed Japanese markets. On a smaller scale, you can sample the chef’s creativity with a “Trust Me Roll” devised by Fang. 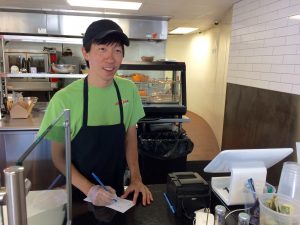 Across town, Nam’s Arepana Latin Grill on Apalachee Parkway is wooing customers with flavorful and inexpensive meals that bring a taste of Venezuela, Colombia, Cuba and Puerto Rico. Visit the restaurant at any hour and you’ll see Nam behind the counter, cooking or serving customers arepas or rice bowls with roast pork, carne asada (steak), chicken or vegetables.

Phi Do-Lui said her brothers Viet and Nam each bring their own talents to the restaurant business “but they both want people to enjoy their experience as much as the food.”

Do-Lui said she knew they would make it as restaurateurs. “The surprise was, ‘Why not Vietnamese?”

The short answer is that the market hasn’t been right yet, said the Vu brothers.

But their goal is to open a Vietnamese deli, bakery and café within two years, specializing in creative and classic takes on bánh mì sandwiches, among other items.

“We want to have the resources to do it the right way,” said Viet, noting he would like to make a mark on Tallahassee.

Whether it’s a Latin, Japanese or Vietnamese restaurant, added Nam, “I would like to see any business we build stand the test of time.”

Here’s where to find the Vu brothers’ businesses: 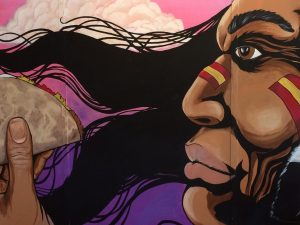 Ma’s Diner a hit for its comforting breakfast/lunch...

Masa has so many delectable choices it's hard to d

Two festivals have combined for such a fun event that also benefits good causes. Thanks for sharing Danny!

Here is a great preview with everything you need to know to get you ready for Saturday's Panacea Craft Beer and Oyster Festival in Wakulla County! https://twitter.com/DannyAller/status/1507334321325195266