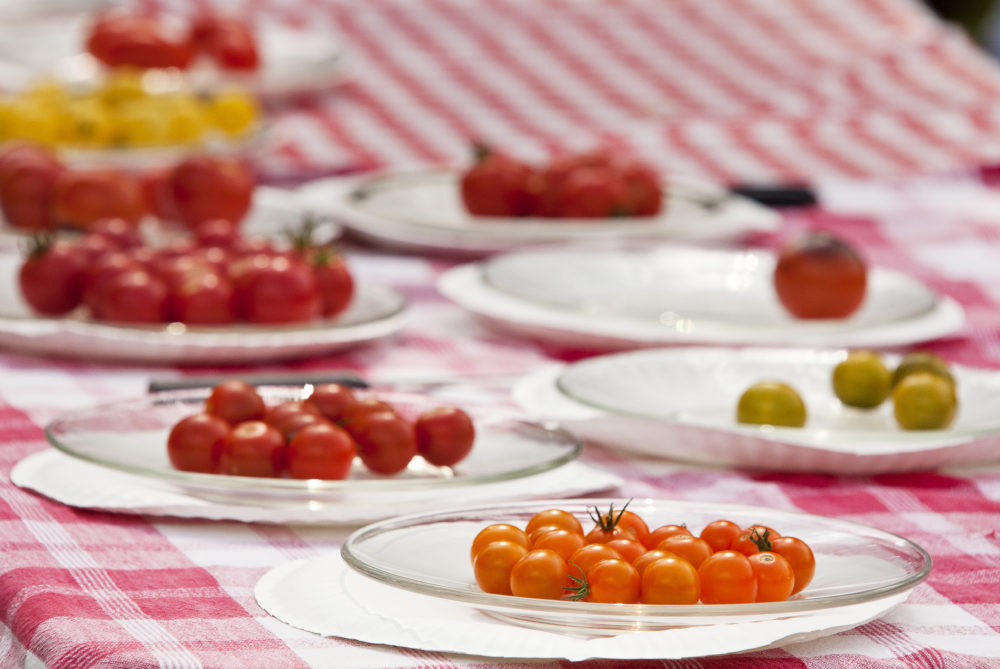 Louise Divine and her husband Herman Holley launched the first Tomato Feastival at their Turkey Hill Farm more than 12 years ago as a potluck gathering of local farmers.

“We had friends who grew tomatoes and we said ‘let’s have a party and eat tomatoes and pick out the one that tastes the best,’ ” said Divine. “The next year it got bigger.”

This year, the event takes another big step. “The Feastival is going to town,” said Divine.

For the first time since its inception, the party moves off the farm and on June 9, heads to the Goodwood Museum and Gardens.

“It’s closer in town so we think more people can attend,” said Sharon Kelly, chairman of the feastival. “It’s a good location. Goodwood is an oasis in the middle of town.”

The Feastival has already evolved into a major fund-raiser for the Red Hills Small Farm Alliance.

Despite the change in location for the Feastival, the purpose and atmosphere should be similar, said feastival organizers.

Several farmers will be selling tomatoes and other items, plus there will be music by the four-piece group JazzEtcetera, games, events for kids, raffles and food for purchase. Vendors include Jessica Bright McMullen, owner of KitchenAble Cooking School and Catering and Quincy’s Damfino Cafe & Market.

“I love the feastival because it brings together a lot of people in our community who love, and want to support, local agriculture,” said McMullen. “It also brings the farmers together in an environment where they’re appreciated and celebrated.”

McMullen will be selling her homemade tomato pies and her “not pimento cheese biscuits.” The secret is that she uses tomatoes instead of pimentos.

The alliance will be selling tomato sandwiches made with tomatoes from the Red Hills farmers, on white bread with mayo, naturally, as well as potato salad made by Grove Market Cafe from the potatoes grown at Full Earth Farm. Also for sale: local pork, beef and chicken sausage.

A prime attraction will continue to be the now-traditional judging of the best local tomato.

Thinking back to the beginning of the Feastival, Divine recalls that chef Terry White (Sage, Il Lusso)  was one of the first judges to pick out the best tomato at the casual contest.

“I remember it was extremely hot and we tried several local farmers’ tomatoes,” said White. “I felt like the smaller cherry tomatoes were the best. The larger beefsteaks were a little watery and bland due to lots of rain. I think this year will be a great year for tomatoes round here.”

For Divine, the spirit of the event remains the same.

“It’s about tomatoes and the farmers and the Red Hills Small Farm Alliance,” said Divine. “I still envision it as a party. But it’s a big party.”

Other event highlights include:

Tomato tasting contest: Anyone can bring a tomato from their garden to compete for bragging rights as the best tomato of the Feastival.

Ask a farmer station: You can ask farmers your gardening questions.

Raffles: for a motorized, 16-foot canoe on a trailer, jewelry, pottery and gift certificates.

Cake Walk: It’s like musical chairs, except participants have a chance to win a cake or pie made by local bakers if they’re in the right spot when the music ends. A Feastival highlight.

Activities: Photo booth, games for kids, bocce and a giant game of Jenga.

For tickets and more information: https://www.redhillsfarmalliance.com/

When Diet, Food safety is critical

HOPKINS’ EATERY A SLICE OF COMFORT