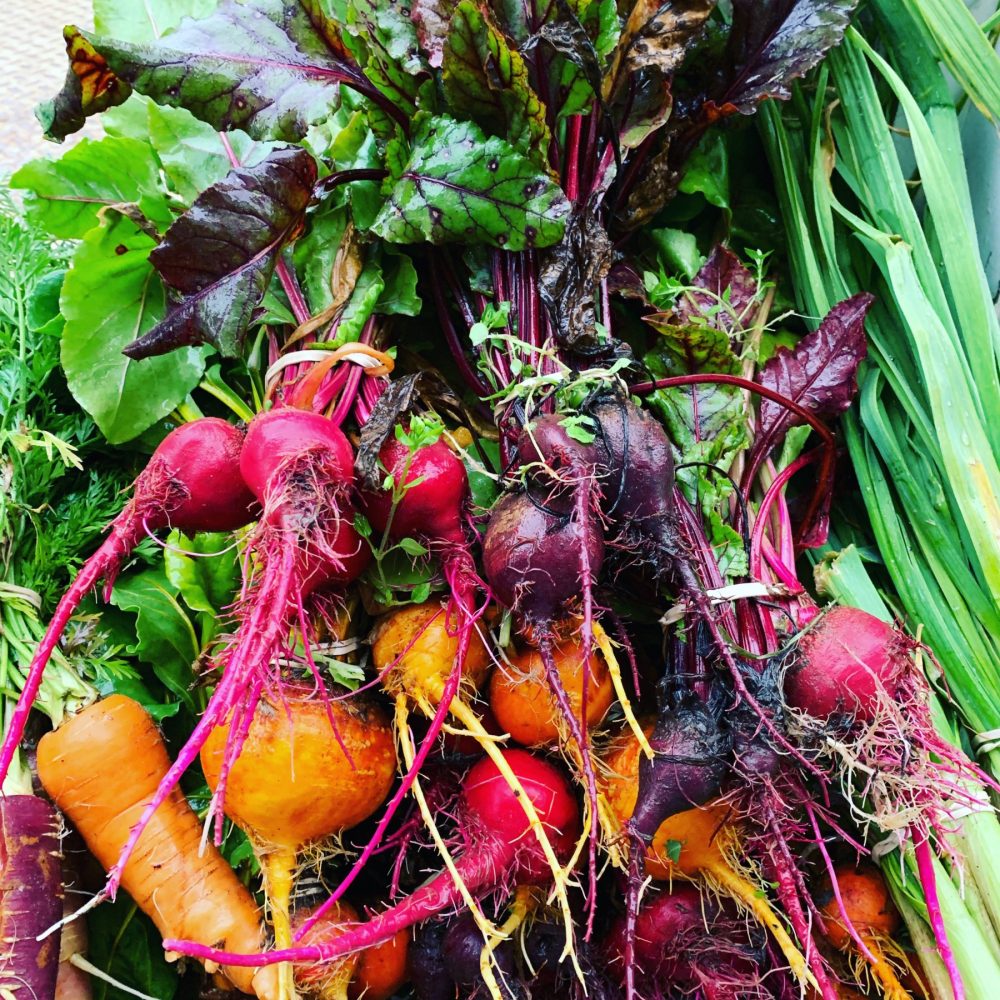 Stop by the Growers’ Market at Lake Ella and follow the heavenly aromas to the stand for Pita Queen. There, you’ll find Israel Artzi busily whipping up the best falafel sandwiches you’ll find in Tallahassee, perhaps anywhere.

Artzi and his wife, Yocheved  “Yoche,” both originally from Tel Aviv, sell organic vegetables the couple grows on their two-acre farm in Thomasville, where they also have a commercial kitchen.

Their crops include several types of lettuce, beets, bell peppers, tomatoes, eggplant, heirloom carrots and turnips, depending on the season. They also make handcrafted breads, halvah (made from sesame seed paste) and hummus. Yoche creates a sour-spicy mix of fermented cabbage and other vegetables, spiked with turmeric, a blend she calls a “superfood.”

“When we came to America, it was so hard to find good quality fruits and vegetables,” said Yoche. “It was like ‘what do we eat?’ So we started to bake our own pita and bread and grow vegetables.”

For eight years, they’ve set up tables at Lake Ella’s Growers’ Market, established by the  Florida Agricultural and Mechanical University’s StateWide Small Farm Programs, which aims to educate and assist small farmers and also bring fresh food to the community. The number of vendors varies, along with what they’re selling, which can include honey, jams and cheese.

Vendors at the Lake Ella market must grow or produce the food they sell, said Jennifer Taylor, coordinator of the university’s small farm programs and an associate professor of agriculture at FAMU.

“The Growers’ Market provides a pathway for small farmers, using organic methods at their farms, to grow and market” their food, said Taylor. As seasons change, products change.

Over the years, the Artzis have been a staple at the market, cultivating dedicated customers who come by weekly for a taste of homegrown goodness.

“These falafels are simply the best,” said Than Cannon, a regular customer eagerly watching Israel concoct the pita sandwich, a process that will nearly make you drool. “The ingredients are all so fresh — from the garden to your mouth.”

Israel takes mounds of his homemade chickpea mix and drops them into canola oil quickly to set a light, crisp coating. Several falafel are placed in Yoche’s fluffy homemade pita bread, stuffed with a generous amount of chopped salad plus hummus, tahini sauce and thin slices of sweet and Russet potatoes and eggplant.

He tops off the sandwich with a falafel or two garnished with squirts of sauce fashioned into a happy face. You’ll be plenty happy once you take a bite.. Try to eat the mammoth sandwich quickly, either at the nearby picnic tables or at home and grab plenty of napkins — it gets pretty messy.

Yoche also brings several of her homemade breads to the market, including challah and whole wheat as well as the pita, and she makes her own halvah. Another must-have treat: Yoche’s homemade pastries called mamauls, made with Israeli dates from the Jordan Valley.

If you can’t make it to the farmers’ market, you can find Pita Queen products at New Leaf Market and Whole Foods. While the couple is passionate about farming and baking, it’s just part of their story.

Artzi met Yoche when he was just 14 and said he knew he would marry her someday. They’ve now been married 50 years, have three children and eight grandchildren.

The couple left Tel Aviv 29 years ago and moved to Thomasville. Israel was a developer and builder in Israel and Georgia before he starting growing produce, “which I just love,” he said. Farming became his hobby and his passion.

Yoche still works as a marriage and family therapist as well as a baker. She’s also the author of a collection of poems called I Have Two Countries, and the book, Stealing German Bread, which tells the true story of her mother’s survival in Hitler’s concentration camps.

Her mother finally broke her silence 60 years after World War II to describe her nightmarish experiences and her efforts to keep her sister alive during their imprisonment only to see her die two days after the camp was liberated.

Her mother’s prevailing lesson was that “family is the most important thing in life,” said Yoche. “A good friend is also like family.”

Being able to grow food and prepare quality ingredients has become a labor of love for the couple.

“To be in the garden feels like the next thing to air,” Yoche said. “We feel a connection to the earth.”

A taste of ‘Caribbean soul’ at Pineappetit food truck

What a fabulous story! And so correct. Theirs is the best falafel sandwich I’ve had anywhere. It’s been too long. Thanks for the reminder to go back again soon! And thanks for providing insight into this amazing couple.

Thank you so much for your comment, Rick! They are incredible people and I love their falafels, vegetables and pastries.