A taste of ‘Caribbean soul’ at Pineappetit food truck 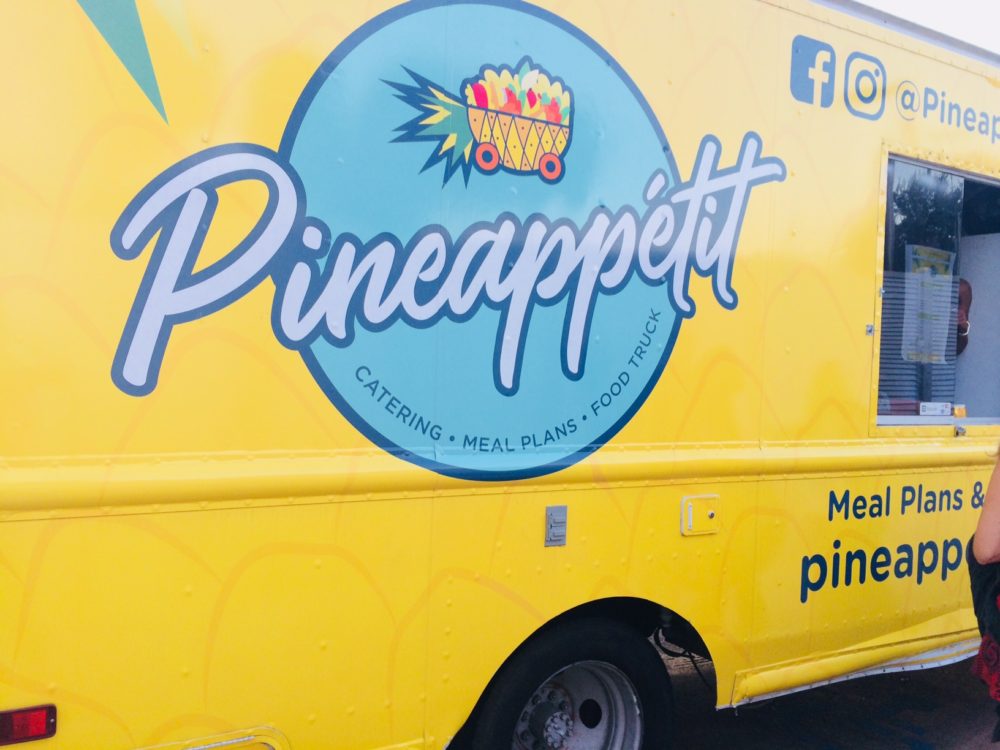 Tallahassee can tout an impressive lineup of food trucks that offer so much more than burgers and barbecue (though there’s a good selection of those). Here’s another winner to add to the list: a sunny yellow food truck called  Pineappétit, from 26-year-old entrepreneur Sam Burgess.

His truck offers pineapple bowls, delectable dishes with a colorful combo of either chicken, steak, shrimp or salmon paired with well-seasoned cilantro rice, sauteed bell peppers and your choice of sauce. What helps to make these dishes special is that they’re served in a bowl made from half a fresh pineapple, so the sweetness of the fruit balances the spicy/savory flavors. You can also order two skewers with two proteins and sauce.

“From the first bite it’s like taking a vacation,” said Burgess.

When these pineapple bowls emerged from the food truck, they indeed had an islandy flair. All we needed was a pina colada to complete the mood.

My husband and I first tried Pineappétit when it was parked outside the very cool Bricks & Brass venue on Tennessee Street as part of an Oct. 3 event featuring music by the Zach Peiffer Band and a show featuring local comedians sponsored by Sarah Lamb Comedy Productions. We were able to bring the food inside to eat while we watched the show.

Burgess, also a caterer, calls his cuisine “Caribbean soul,” and it matches his description of sweet and spicy. His sauces include jerk, lemon pepper, curry, orange, barbecue and teriyaki.

We shared a shrimp pineapple bowl with a teriyaki sauce. The shrimp were plump and perfectly cooked. The dish had a definite kick with layers of flavor. You wouldn’t expect to find the dish on a food truck, though there are a lot of experienced cooks running mobile kitchens these days.

A native of Cleveland, Ohio, Burgess said his move to Florida “opened my eyes to different cultures” so he wanted to create something a little different.

Burgess started learning to cook when he was a 13-year-old teen growing up in Cleveland, Ohio. During high school, he took over more of the kitchen responsibilities, cooking for his dad and sister, adding friends and family at the table.

But when he started college at Florida Agricultural & Mechanical University, Burgess studied allied health pre-occupational therapy. And he then earned a master’s at FAMU in sports management.

He said that when he graduated, he was “surrounded by entrepreneurs” so he decided to give running his own business a try. He went back to his love of cooking. Burgess started out with a small catering business on campus called Pineapple Express. He launched Pineappétit in 2018.

Aside from his food truck, Burgess offers a larger catering business as well as a meal plan program with a different lineup of dishes including comfort items like turkey meatballs, stuffed peppers and sweet potatoes.

Burgess’ dream is to someday franchise Pineappétit or maybe open a brick-and-mortar establishment, but for now, he’s doing what he enjoyed as a kid: reaching others with his cooking.

“I love to watch people take that first bite,” said Burgess. “When I see that initial reaction that lets me know I did my job right.”