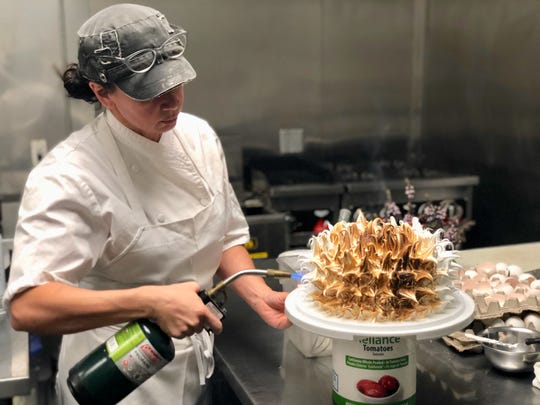 When it comes to art, local pastry chef Sylvia Gould knows the importance of aesthetics. Gould creates some of the best, if not the best, desserts in town at Kool Beanz Café, a Midtown landmark.

Born in Bay City, Michigan, Gould is the child of a Vietnamese mother and an American father. Her family lived on a farm until Gould was 10 years old, and then they moved to Central Florida.

“I’ve always been fascinated with baking and the science and art behind it but ultimately I wanted to be a veterinarian,” she said.

Gould attended Florida State University, taking classes to become a veterinarian but because she loved art she picked sculpture classes as her electives.

Gould ultimately switched her major to fine arts where her passion and interest grew even more. She graduated from FSU with a Bachelor’s degree in fine arts.

Soon after graduation, Gould devoted her time to baking, combining elements of her Vietnamese and American heritage to create complex and exquisite desserts.

“Being that my mother is Vietnamese, that’s where I get my creative side from making desserts like the coconut cassava cake or using ingredients such as lemongrass, Thai basil and ginger for my crème brûlée,. My father is American, which is where I get that traditional side, which includes me making classic chess pies, cookies and shortcakes.”

One of Gould’s most popular desserts is the coconut cream meringue layer cake. She has a list of customers who want her to call them when it’s available. The cake is usually presented with fresh blackberries and a drizzle of pandan anglaise over the top. Pandan is a tropical plant widely found in South Asian cooking and used as a flavoring agent in many dishes such as rice, custards and ice creams. It pairs well with the coconut cake and illustrates how the flavors of her diverse cultural background complement each other.

Another big source of her inspiration comes from the teachings of celebrated chocolatier Taria Camerino, who has appeared on Bizarre Foods with Andrew Zimmern and the Food Network competition show, Sweet Genius. Gould and Camerino worked together in Jacksonville, at Moxie Kitchen, one of Jacksonville’s best restaurants.

“I would always call her and ask her for advice on my pastries and also about managing my time because when dealing with baking you have to have time and patience,” she said.

Gould has developed a reputation for her intriguing concoctions at Kool Beanz Café. Sometimes customers will come in just for dessert, leaving notes with suggestions of what they’d like to see next on the menu.

“Sylvia is without a doubt the most gifted and creative pastry chef I have worked with in 40 years of cooking,” said Keith Baxter, the owner and executive chef of Kool Beanz Café. “She is a consummate professional who is such a luxury for my business.”

Art is not just what you draw or paint. In Gould’s case, the best form of art is the one you can eat.

Devante J. Carroll,  a guest writer for Tallahassee Table, is entering his senior year at Florida Agricultural and Mechanical University with  a major in broadcast journalism.

When Diet, Food safety is critical