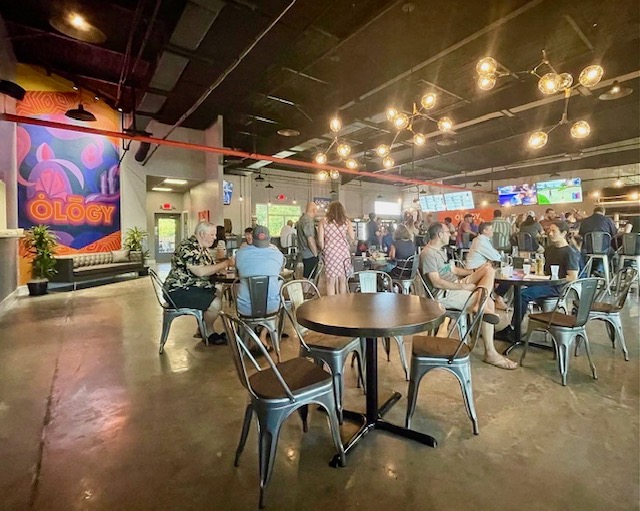 The brewery launches its third location, with event space and outdoor seating.

Our craft beer scene gets a big boost with the opening of the much-anticipated Ology Northside.

This space is not only a tap room. It has a full menu from an experienced chef, event space, a nook with merchandise (T-shirts, hats, caps), an elevated cocktail menu, an outdoor patio and even its own brew – the Northside Lager.

On Thursday, we talked with co-owner Nick Walker in his new venue, a place worthy of his pride. In Ology’s accomplishments and vision, in the significance of this new venture. And no wonder. Ology Northside is a gleaming, 4,800-square-foot venue, located at 2910 Kerry Forest Pkwy., in the former homes of Beef ‘O Brady’s and Subway. Step out back and there’s a 50′ x 30′ deck/patio with strings of lights and room for live music.

Ology’s production will still primarily take place at their Ology Distilling location on Power Mill Court – except for that special Northside Lager.

“We have 33 taps, 6 of which will be draft cocktails and mocktails,” Walker said in a Tallahassee Democrat article by Matthew Crumbaker, co-founder of the Tallahassee Beer Society with Danny Aller. “It’s cool to see the whole thing come together.”

The pandemic had put the Northside brewery on hold for more than two years.

“We had to sit on it awhile,” said Nick. “But construction started again in November.”

A former nurse at Tallahassee Memorial Hospital (he has bachelor’s degrees in nursing, biology and biological sciences), Nick decided to switch careers and follow a dream. On June 16, 2017, he launched Ology in a funky, laidback spot in Midtown with friends Brian Clark and Paul Woodward.

“This space is a culmination of what Ology has become over the last 5 years,” said Nick. “We started out as a small brewery in Midtown and we just had craft beer, my passion. Since then we opened Ology Distilling, making cocktails with in-house, high-quality liquor.”

Then Ology’s Midtown site started serving another brew – coffee – in Midtown with java master, Jason Card. He offers custom hand-brewed choices on a limited basis, aims for the best beans and roasters and features pastry items from Hawthorn Bistro & Bakery as well as other bakers.

Ology launched a food operation called FoodLab, serving creative fare from a food truck in Midtown but had to disband after a complaint from a resident. But food is back!

The Northside branch features a full menu from respected chef, Randy Blass, who has more than 20 years experience in the hospitality business. He learned a lot about scratch cooking from the Chophouse on the Bricks in Thomasville and most recently was executive chef for Whole Foods, developing and testing recipes, among other roles.

Blass is focused on well-sourced ingredients. He is working with several local farms and Grady Ranch, to serve local meat and produce, and is also curing his own meats.

While I was at Ology on Thursday, I sampled two items: The Turkey Gouda Press features slices of turkey breast that has been brined for 48 hours. These are real turkey slices, not the deli stuff, served with sun-dried tomato goat cheese spread, smoked Gouda and Glass’ own pickles (he also makes sauerkraut and other fermented foods) served on a buttered baguette from Tribeca Oven (out of Carlstadt, NJ).

“We are basically trying a small, local, everything-made-from-scratch menu,” said Randy. “We’re making it fresh, trying to match the beer.”

Randy said one of his specialties will be either house-cured meat or meat from local sources such as Grady Ranch. Randy prepares a mean pastrami sandwich, likely to be offered as a special, along with foie gras, bone marrow. “All lunch meats will be made in-house.”

“We want to get the menu down, see the flow of traffic and we’ll start evolving,” said Randy.

Some other items on the menu at the get-go are a veggie press, chopped Buffalo chicken sandwich, smoked beer brat, a Southern grazing plate and melon salad. The low country poutine is bound to be a hit with baked French fries with Old Bay white gravy, topped with grilled  jalapeño corn, andouille sausage and goat cheese crumbles.

Another exciting prospect: The brewery plans to start serving breakfast and  lunch, with a Midtown-style coffee house, on July 9 as well as dinner  and a late-night menu so this place has it all.

Other items will include a vegetable egg burrito, loaded Tater Tots, avocado toast and house-baked muffins.

“At Northside, we’re bringing it all into one place,” said Nick. “It’s the beer, it’s the liquor, the cocktails, coffee and food all in one space.”

No doubt, this opening lifts our spirits.

Also on the horizon: a fourth location opening in Tampa.

For the first few weeks, Ology Northside hours will be 2 p.m. to 1 a.m. Friday, noon to 1 a.m. Saturday, noon to 10 p.m. Sunday and 4 to 10 p.m. Monday to Thursday. It’s located at 2910 Kerry Forest Pkwy., in the Northampton Shopping Center, the same plaza as Red Elephant Pizza and Grill and El Viroleño. Stay tuned for updates.

This is happening: Restaurant openings, closings and more lunch