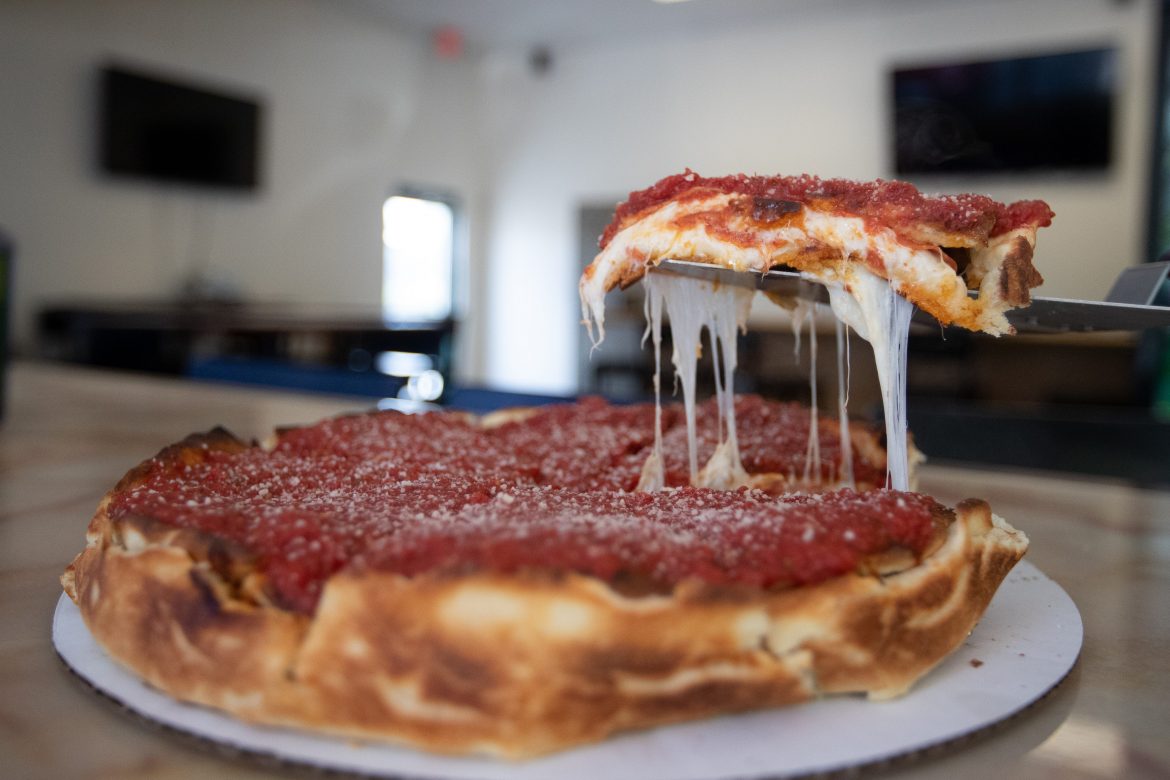 Eric Riser was 15 when he started working in restaurants. Now, in just a decade, the 25-year-old has his own restaurant, Munchies Pizza, serving one of the hottest pies in Tallahassee — a Chicago-style stuffed pizza that’s nearly two-inches high.

The pizza has been in so much demand that it can take one to three days to get a deep-dish pie once you place your order. It used to take longer but Riser has recently hired eight people so the process is taking less time.

Riser is already planning to open a second location at 2475 Apalachee Pkwy. He opens to open by the end of summer. This will help him meet the orders of residents as well as students who will frequent the campus location if colleges resume in the fall.

“We can now do about 70 (deep-dish pies) a day,” said Riser, whose pizzeria is on West Virginia Street by the Florida State University campus, across from DeGraff Hall. ”With New York style pizzas we don’t have those limitations.”

The Ocala native started out serving New York pizzas when he first opened Munchies in June 2019, gaining popularity as a late-night place to grab a tasty slice of pizza or perhaps an order of Buffalo wings. When students were in town, Munchies stayed open till 3 a.m.

New York-style pizza was the type Riser most familiar with after working as a manager for Dominoes in Gainesville, Tampa, Fort Myers and Connecticut.

“When I went to Connecticut I had no idea there were so many styles of pizza,” said Riser.

He then moved to Tallahassee to be with his family — his parents had moved here to be near his sister — and to go back to college to study hospitality at Florida State University. But while driving for Uber, Riser discovered a perfect location for a restaurant on Virginia Street. He decided to seize the opportunity with an assist from his mom, Joanne, and put college on hold.

Riser was building his business when shutdowns occurred due to Covid-19. Riser had to come up with other attractions to help the restaurant survive. Seeing the need for yeast, flour, eggs, even toilet paper and other ingredients, he started offering groceries at Munchies. Customers often bought a pizza or wings along with some provisions. But more needed to be done.

“I was at a point where I had to do something,” said Riser. “I wasn’t sure whether students were coming back in the fall. I could make it ‘till the end of the summer but if the university was closed in the fall I would have to make some difficult decisions and I wanted to stay ahead of that.”

Riser realized that there was a  lack of Chicago-style pies in Tallahassee. He didn’t get to go to Chicago but he sampled the deep-dish pizza in different parts of the state and did lots of research.

He started serving the pies a few weeks ago and demand escalated. At the time he only had two pans and the staff was primarily him and his parents. Riser had to quickly hire more people and get more pans.

The 12-inch, deep-dish pizza is a time-consuming process.  Any way you slice it, the Chicago-style pie looks different, tastes different and is prepared differently.

The dough is kneaded and brushed with butter.  It takes about two pounds of dough to make the pizza (before it bakes). There’s about a pound of mozzarella (shredded in-house). Riser can use vegan cheese but the crust does have butter so there’s no exact vegan Chicago-style pie at Munchies.

The pizzeria offers an extensive list of toppings including cheesesteak, pepperoni, salami, sausage, varied peppers, onions, feta and garlic. You can still order wings, salads, sandwiches, appetizers and a variety of New York-style pies — with thinner crusts and a thin layer of sauce baked in the oven.

Riser cooks the tomato sauce for the Chicago pie from scratch, letting it simmer for at least an hour. “The sauce never goes in the oven.” The pie is topped with a dusting of Parmesan cheese.

My  husband and I ordered the Chicago-style pie with ham and mushrooms. You can call on the phone but you’re urged to order online. I had heard of friends having to wait four or five days to get their pie but by the time I ordered our pie last week, Riser had already begun training his new staff. We got a call that our pie would be ready the next day. We had a choice of a 12:30 p.m. time slot or one at 7 or 8 p.m. We chose the lunchtime slot, usually an easier time to get a pizza, Riser said. The basic, eight-slice Chicago pie is $18 with $2 per topping.

Although the pie is an average 12 inches, it’s so thick it looks humongous. One slice is like a meal. We took a bite and it was delicious. The rich, garlicky sauce has a slight kick. As  my friend Danny said, the mozzarella Is everywhere, including the back of the crust and up the sides. I love the way it melds with the dough. We also had plenty of ham and mushrooms.

I thought for sure that we would have to freeze most of this pie, but it was so good we, well mostly me since I’m the pizza lover in the family, ate one slice every day and finished it off. I haven’t had a Chicago-style pizza in years but Munchie’s pizza held up well to my memories of the pie.

I am already looking forward to the next one.