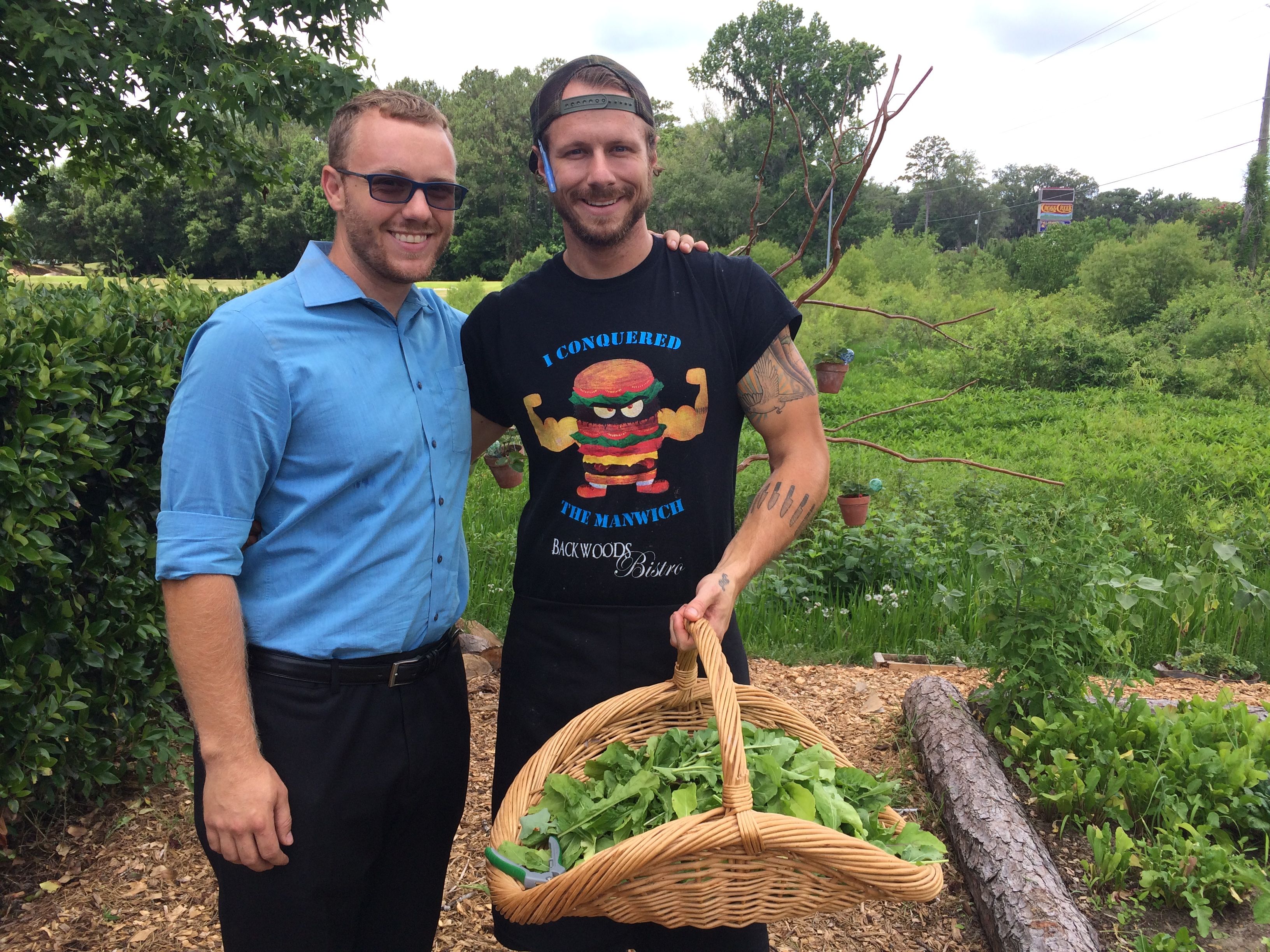 Once a week, each cook at Backwoods Crossing takes a turn coming to work extra early, but instead of slicing and dicing in the kitchen, they head outdoors. From 8 a.m. to 11 a.m., the job of the early shift cook is tending the garden. 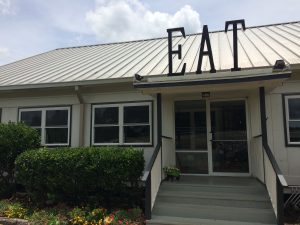 the rainbow of veggies sprouting outside the Southern-style restaurant, from the owners of Backwoods Bistro.

This new venture from Jesse and Tyler Rice sits on four acres on Mahan Drive, across from the Tallahassee Automobile Museum. For now, roughly an acre of the property — out front and in back — is devoted to more than 40 crops, including crookneck squash, zucchini, bell peppers, purple kale, arugula, heirloom carrots, cucumbers, tomatoes, collard greens and at least a dozen herbs. The plan is to plant more.

“The chefs thrive on preparing fresh veggies,” Tyler said. “They’re all really passionate about what we’re doing. They can actually help 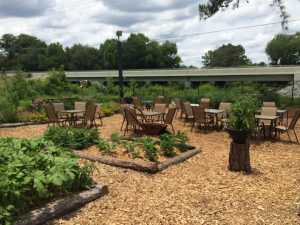 grow the food they’re cooking and see it served to customers. It’s an experience they don’t have in other restaurants.”

While there’s been a lot of controversy recently about false farm-to-table claims (see the excellent Tampa Bay Times investigation), the Rice brothers tout Backwoods Crossing as the real deal. If there are doubts, chef Jesse said, just look around.

“There’s no convincing people,” he said. “They just have to walk outside.”

In the front of the rambling white building, formerly Stinky’s Fish 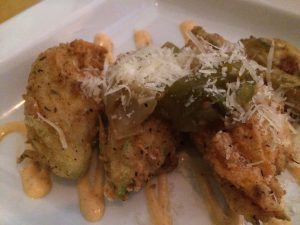 Camp, are neatly arranged plots brimming with fresh produce, a green backdrop to outdoor tables seating about 30. Behind the building, more crops are planted in beds prepped with topsoil and mushroom compost. Tyler said no pesticides are used in the garden.

On any given day, you might see Jesse dash outdoors and return 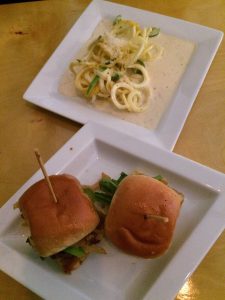 with a basket of arugula or tomatoes that will wind up on your plate. “If I run out of something, I can literally run out and pick it, quick.”

Jesse, 30, and Tyler, 29, opened Backwoods Crossing on May 31 in what they’re calling a soft opening to tweak the menu, train the staff and shake out the flaws. They plan a grand opening in a few weeks.

The place has a brighter, lighter decor than the Bistro, with gleaming pine floors, displays of garden tools and colorful pictures of the restaurant’s  star attraction: veggies.

Jesse, who runs the kitchen and creates the dishes with input from his staff (and some family recipes), offers a daily Garden Creations 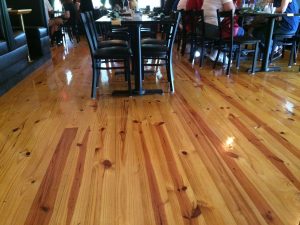 menu that uses produce grown on premises in their appetizers and entrees.

For starters, we were impressed by our delightful server, Nichole. She exuded enthusiasm about the place and the farm-to-table concept. She was even excited about her own experience weeding in the garden, and was knowledgeable about the complicated dishes.

We settled on a few appetizers from the Garden Creations list. Prices for the nine dishes on the list ranged from $5 longneck squash cream soup to the $17 black grouper served with longneck squash,
broccoli sprouts, baby carrots, toasted red potatoes and sweet basil pesto.

Some of these dishes are rich so good to share, like the appetizer of scrumptious squash blossoms. These are stuffed with a decadent mix of cream cheese and real blue crab, 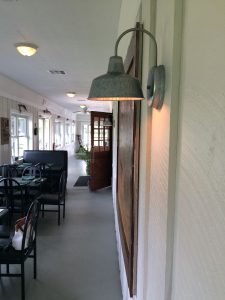 seasoned with oregano and thyme, then dipped in panko and drizzled with a remoulade-style sauce. We gobbled them up in a jiffy.

The kitchen does a spiralized, pasta-like version of squash, zucchini and bell peppers in a creamy garlic lemon sauce with a dusting of basil and other herbs from the garden. With such fresh veggies, the dish would be a treat even without the sauce.

You can order a sampling of six appetizer Garden Creation dishes for $30 — the cooks all whip up their own versions of small plates. “It’s a friendly competition,” Tyler said. “We ask the customer which one they think is best.”

Customers will notice a “Hydrate the Kitchen” item at the bottom of the Garden list, which means if you like what you’re eating, reward the cooks with a round of beer. They’ll hoot and holler their thanks. “It’s a morale boost,” Tyler said.

From the regular menu, we shared a trio of sliders, the beef tender and flavorful, garnished with a few beer-battered onion slivers plus sliced tomatoes and arugula from the garden, and with a splash of blueberry-jalapeño reduction on a buttered bun. It’s a fun and filling take on the slider.

The Crossing gets its meat from Seminole Pride Beef (Seminole Tribe of Florida), which the Rice brother said was the closest source of a large quantity of meat available on a regular basis.

On this early afternoon trip, we passed on the wide range of drinks, wines and beers from the full bar. But we saved room for one of Jesse’s homemade desserts, sweet potato casserole. Each bite is a 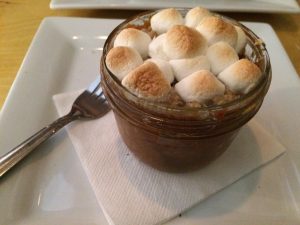 taste of a memory, with a whisper of cinnamon and the gooey goodness of browned mini marshmallows. No wonder it reminded us of the holidays; Jesse adapted it from his mother Winky’s Thanksgiving recipe.

My husband was regretting not getting the soup earlier so for his final course, he had the blue crab corn bisque, a lusty rendition with onions and mushrooms and plenty of cream and butter, plus delicious croutons.

Until recently, Tyler was the money guy in the restaurant biz, helping out with financial support. With a degree in mechanical engineering, he most recently worked overseas on oil rigs in Qatar, to ensure “we did not dump oil in the Persian Gulf and did everything properly.”

When Jesse found the Mahan location in November and thought it would work for a new restaurant venture, Tyler came home and didn’t go back.

For months, the brothers, with family and friends, renovated the space inside and out.  During the process, their dad Randy stayed in a camper van in the parking lot  so he could wake up at 6 a.m. to water the garden every day, Tyler said.

The Rice brothers have lots of dreams for Backwoods Crossing. The place can seat about 150 inside the main dining room and wrap-around, enclosed porch. They have room for 40 in a private banquet room. They envision the small lounge as a perfect place for friends to host football parties. And they plan to add live music in the evenings.

We’re looking forward to see the Rice brothers’ vision grow, along with the crops, at Backwoods Crossing.

His Job Really Is A Grind

I use my fresh veggies a lot but I het my pork from Moore Pigs in Madison Fl. They are much closer, grow heirloom pigs and are a young faer and his wife and family. Try them and tell them I sent you. There are also several cheesemakers in the area.

The catfish and side salad were so good we’re going back as soon as we can. The salad was so fresh I could have made a meal of it. The Key Lime pie was a sumptious way to end our meal. I want to celebrate all my special occasions there.