A little Italy in TLH 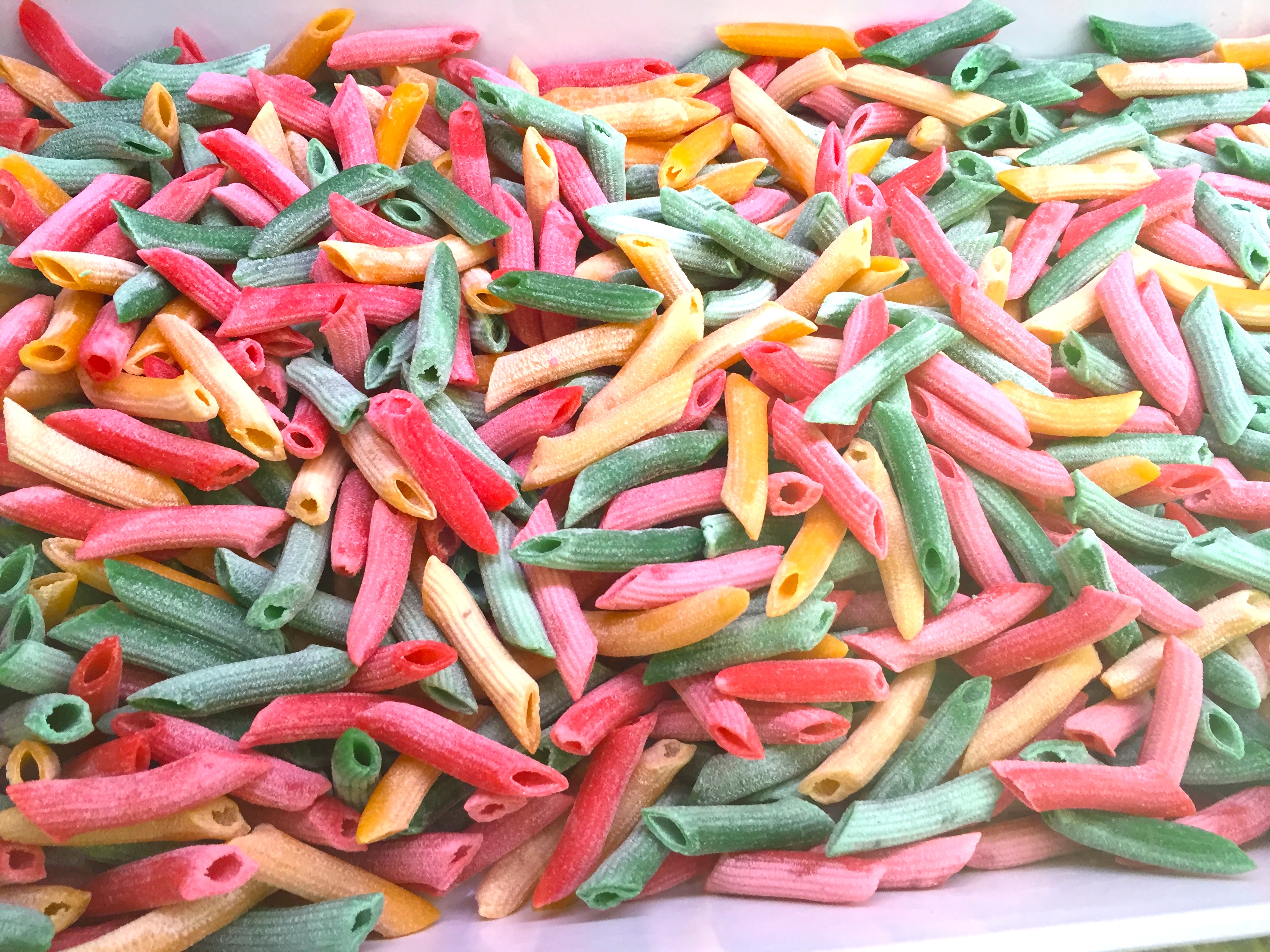 Urban Food Market at the Centre of Tallahassee is now open, and there’s nothing like it in the city.

Under the roof of this 30,000-square-foot space, across from Dreamland, there’s a pasta bar, fresh pasta for sale, a fine-dining restaurant, coffee and gelato bar, pizzeria (with a separate pizza-by- 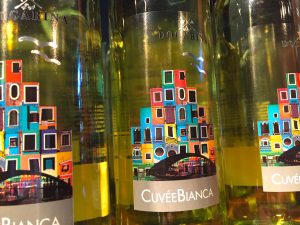 the-slice operation perfect for concert nights), a butcher counter, a sandwich counter with homemade breads, a rotisserie, and a wine and beer shop with space for wine tastings and wine dinners. And, it’s all authentic Italian.

Right now, Urban Food Market is having a soft opening, with the official grand opening set for Oct. 1. On Saturday afternoon, there
was still quite a bit of work to do but Mirko Di Giacomantonio, Urban Market CEO, said they’re ready for customers.

A few additions will be coming next week, when the place will open at 8 a.m. to serve coffee and croissants. 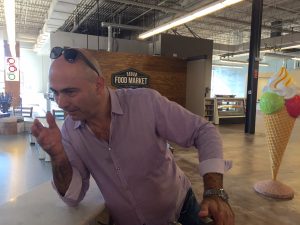 Di Giacomantonio, who owns several restaurants and a pasta factory in Atlanta, gave us an impromptu tour of the place, and we met the chefs, each and every one conveying a passion for his specialty, whether it’s pizza or prosecco.

The emphasis is on authenticity and tradition, with ingredients, even the pizza flour, imported from their homeland.

Di Giacomantonio, a pasta aficionado, said he aims to recapture the magic of coming home after church to Sunday dinners with his
family in Tortoreto in the region of Abruzzi. 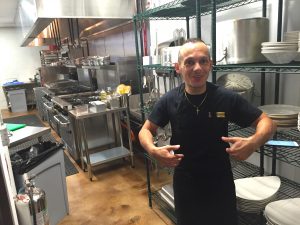 meals at + Trentanove (+39, the country phone code for Italy.)

When he was 16, his family sent him to the Tuscan Culinary Institute of Siena. Di Maggio worked all over Europe and on the Royal Princess Cruise Line and sailed around the world for two years before moving to Florida. 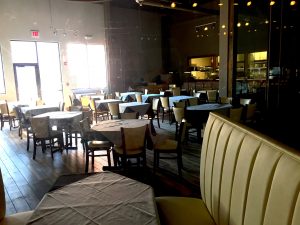 Maggio’s menu includes fried sea scallops in a lobster cream sauce; mushroom risotto; veal scalloppini; cartoccio, a mix of sautéed seafood tossed with linguine and tomatoes, then baked in parchment; thin slices of poached octopus garnished with fresh fennel; and the creamy Italian dessert panna cotta. +Trentanove will also feature a small chef’s room with a window into the kitchen.

We sampled a piece of Di Maggio’s cheesecake and we were gobsmacked. I actually stopped talking for five minutes. 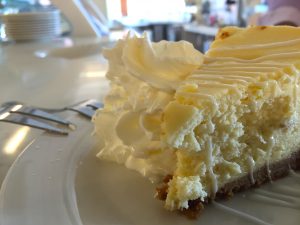 Cheesecake Factory. This cheesecake is phenomenal, light and creamy, probably the best cheesecake I’ve ever had.

If the cheesecake is any indication of quality, we are in for a slice of culinary bliss.

Wine lovers will want to check out the extensive selection at
Vinoteca Tappo from Italian sommelier Vittorio Ledda.

He talked about spending the past two years visiting small vineyards all over Italy, searching for high-quality grapes at affordable prices. In many cases, he told us, the smaller winery will be growing the same grapes as the 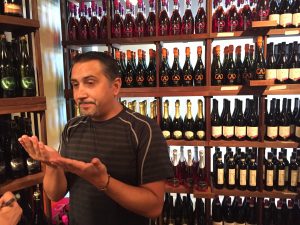 larger, high-profile winery down the road. He’s a wealth of knowledge.

When you buy wine in Italy, he said, it’s more than a business transaction.

You’re invited inside, they serve cheese and meats and you meet the family. Vinoteca Tappo offers 150 bottles imported from Italy, 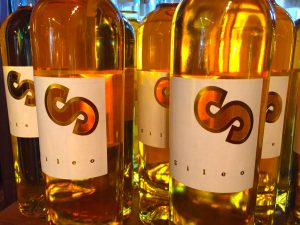 including more than 60 types of prosecco, a sparkling wine made in the Veneto region of Italy.

The more casual pasta bar looks like a quick gourmet meal. You punch in your pasta preference on a computer screen, then pick your
veggies, meats and sauce.

The pasta is made in front of you at the counter and your dish should be ready in about four minutes — for $8 a plate.

Mirko pasta is available from one of the stands in a variety of shapes for $7 a pound, $8 a pound for the ravioli. The tricolor penne features tomato and spinach pasta.

Longtime pizza maker Ferruccio Cosenza, born in Bescia in northern Italy, near Lake Garda, was in the kitchen 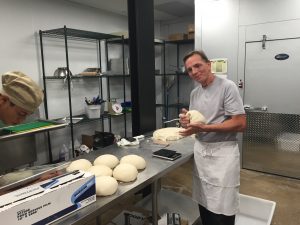 kneading dough, which he
lets rise for three days.

He uses little yeast in his pies, known for their light crust and fresh toppings.

Pizza is cooked in an Italian brick oven, fired with oak. The pizzas bake in the oven for two minutes at 800 degrees Fahrenheit.

One food station sells a variety of cured Italian meats, including 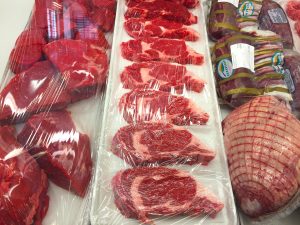 The butcher station features dry-aged steaks, quail and other meats as well as a variety of Italian cheeses.

Another stand dispenses sandwiches, on a variety of breads
displayed in wooden troughs.

Sacchet was manning the gelato bar, called Fiocco Cafe, a centerpiece in the open space, offering rows of his homemade flavors.

His family has been making gelato for more than 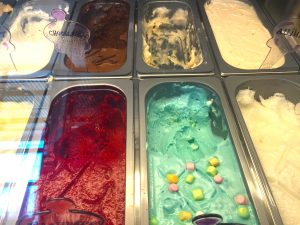 three generations. Sacchet was born in a small city in the Dolomites, a mountain range located in
northeastern Italy, recognized as the capital of gelato for more than 150 years.

He has history here, too, in the form of a gelato machine that’s about 100 years old. 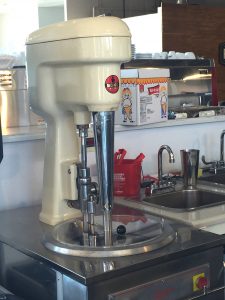 Mario Batali’s Eataly in New York City is certainly a model for markets like this one, a boon for Tallahassee.

But as Giacomantonio said, “It would be nice even in New York.”

We’ll be trying everything, as I’m sure you will, at Urban Food Market in the coming weeks.

Let us know what you think.

When you go…
Urban Food Market
At the Centre of Tallahassee
2415 N. Market Street