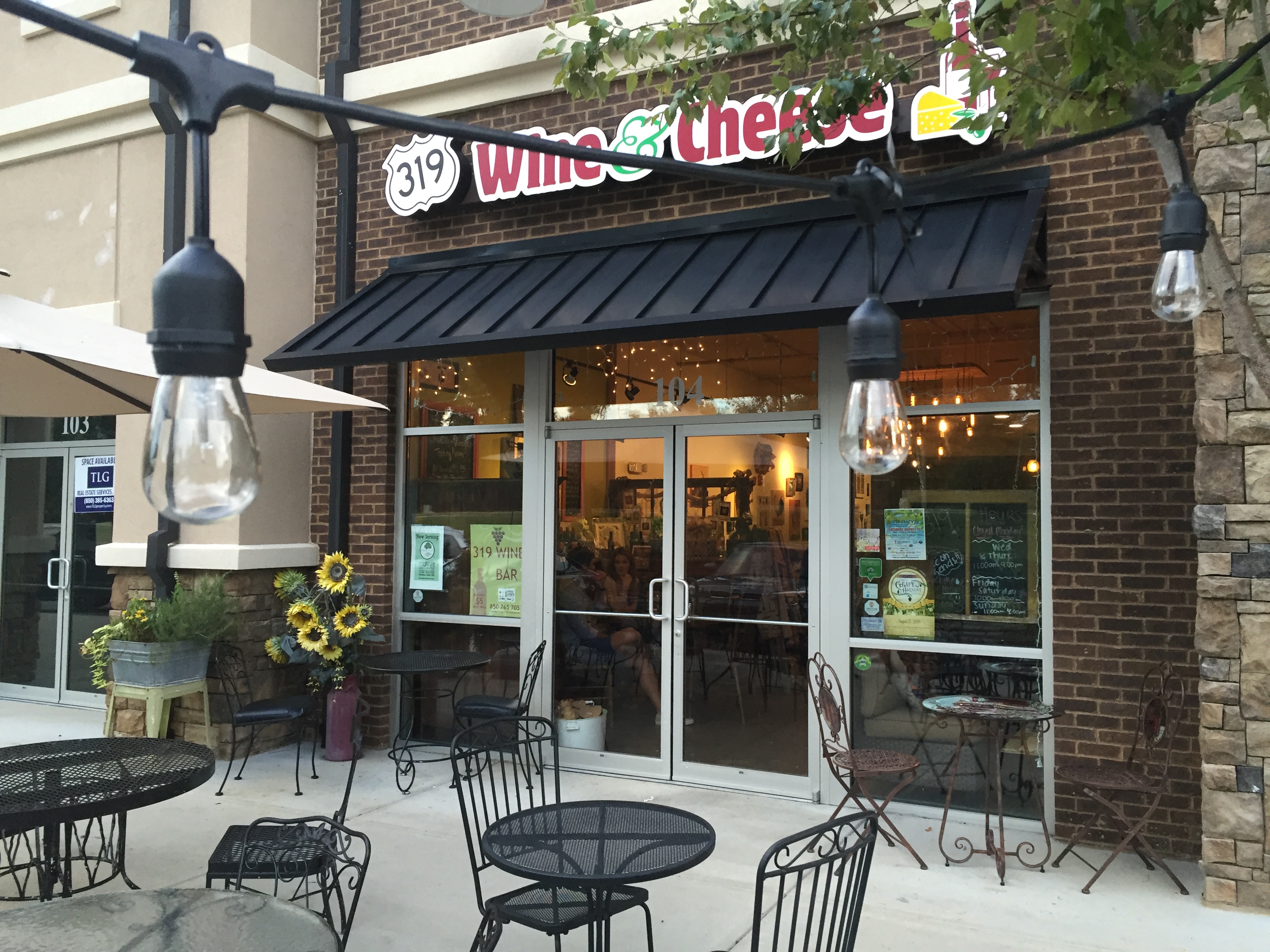 Lynne and Bill Edwards had never worked in the hospitality industry before opening 319 Wine & Cheese Shoppe two years ago. You’d 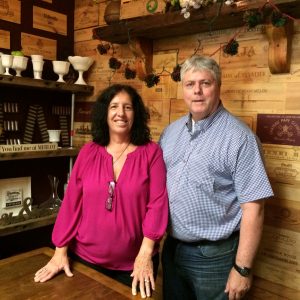 never know it. The couple has managed to pull off a feat worthy of veteran restaurateurs.

319 at the Persimmon Hill Shopping Plaza has evolved into a charming bistro known for its cozy warmth and decor, home cooking and fine spirits. And on weekends, add a taste of live music.

Lynne, who grew up steeped in the recipes of her Sicilian grandmothers, offers a casual menu of mostly farm-to-table fare. My 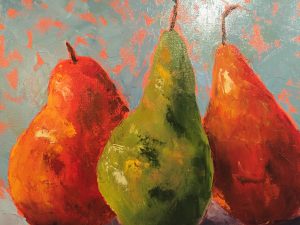 husband, friends and I shared several items on the menu and were delighted with the parade set before us.

On offer are several small plates, including warm lavosh with toppings, spinach artichoke dip or our favorite, the Italian meatballs. These tasty orbs are a traditional dish in Lynn’s family, the meatballs stuffed with pesto, pecorino cheese and mozzarella cooked in a 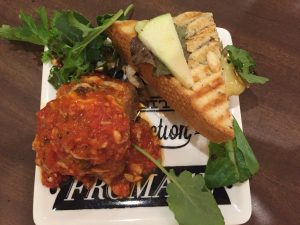 I can’t resist mac n’ cheese on any menu so it was easy to succumb to 319’s version, with three heavenly rich cheeses dusted with a crisp topping of buttered breadcrumbs. More smacking.

We also love grilled cheese sandwiches (who doesn’t?) so were happy with the bistro’s fun variations, like pimento and bacon, or 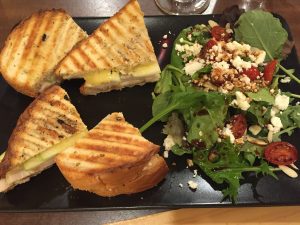 Cheese and charcouterie boards are a specialty here. There’s a selection of four boards with different amounts of cheeses and 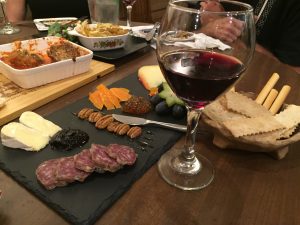 meats, or with no meat. The same board never comes out twice. We picked Board #2 with three artisanal cheese choices, which on our visit were: Sweet Grass Dairy’s Green Hill, a double-cream brie-style cheese; Koko’s coconut gouda, a sublime fromage sweetened with coconut cream while aging; and a Quebec aged cheddar. The board also featured slices of salami and blackberry jam and peach pepper jelly from Blackberry Patch in Thomasville. Garnishes of sliced carambola and grapes were a tart added touch. A lovely, and a hearty, presentation.

Salads and soups round out the menu, along with a few desserts. We 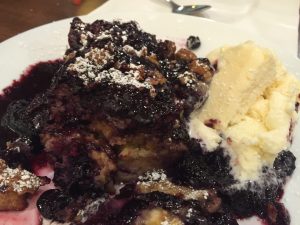 shared the warm blueberry bread pudding topped with vanilla ice cream and a blueberry sauce — fruity and sweet and luscious.

Lynne, an architect, comes to cook at 319 after working full-time as

Executive Officer of the Tallahassee Builders Association, and is also on premises to prepare Sunday brunch. Chef Matthew Johnson cooks during the day for the lunch crowd.

Lynn has no complaints about her long workdays.

“It’s not a job to me,” Lynne said. ”I love to cook. When I was growing up, our whole family was always in the kitchen.”

For their grass-fed beef, produce and cheeses, the Edwards turn primarily to Florida purveyors, including Winter Park Dairy, Orchard Pond Organics in Tallahassee, and Sweet Grass Dairy, KBH Farms and Hubbard’s Country Meats, all in Thomasville. Some of their cheeses are imported from Germany, Italy and Spain. Cheeses, like the menu, are seasonal, with some staples.

Bill selects the wines or craft beers to accompany the cheese boards and he often stops by tables to offer wine tastings. On our visit, we 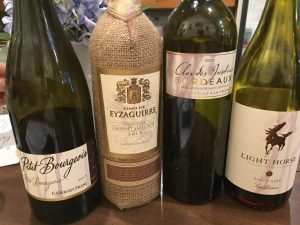 sampled four choices, a Jamieson Ranch Light Horse Pinot Noir, a Chilean Vino Eyzaguirre Cabernet, a French Clos De Justice Merlot and a Petit Bourgeois Cabernet Franc, We sprang for a bottle of the latter to complement our munchings.

He may not be a certified sommelier, but Bill has learned the wine business by visiting vineyards, buying wine and learning from the 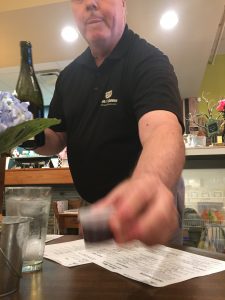 experts. “I taste everything we sell,” Bill said. “We choose small boutique-style vineyards so we have some unique varietals besides the standards.”

The list offers 50 international and domestic wines, with 25 by the glass ($8 to $10) and 25 by bottle only, including Toni Gruner Veltliner from Austria ($34), Juan Gil Jumilla from Spain ($36) and Rodolfo Tannat from Argentina’s Andes Mountains ($26).

“This is a place where people love craft beer,” said Bill, a horticulturist who left his job at the corporate headquarters of Homes and Land in Tallahassee to devote all his time to 319. The Edwards’ son, Ryan, one of their four children, left his job as a personal trainer in Jacksonville to work alongside his parents as the restaurant’s manager. 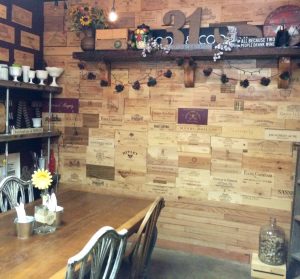 the food. Just about everything in the place has a story. This empty storefront was transformed with reclaimed barn wood, pallets, railroad ties, European wine crates and recycled tin. Take a look at the gorgeous mantle, hewn from wood dredged out of the Carrabelle River (when that was permissible). A French door was rescued from a fire, the soot preserved. Thrift shop 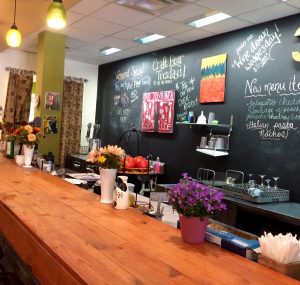 furniture is refurbished to new glory, and a chalk wall delivers messages. Vibrant paintings and photography (all for sale) by five local artists add dashes of color and class.

There’s a small back room for private parties, a communal table and a section for gourmet goodies including jams, pasta and wine stoppers. 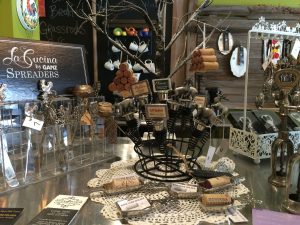 319 is the culmination of a longtime dream and a life’s journey for the Edwards.

Lynne and Bill met when they were both in Lindenhurst Senior High School in Long Island.  She was 16, he was 18 and they later attended the same college, State University of New York at Delhi. They eventually 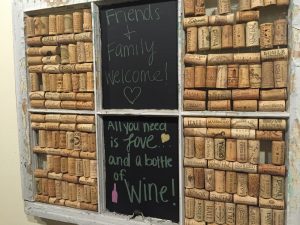 relocated to Tampa and then Tallahassee, where they raised their children and furthered their careers all the while dreaming.

“We always wanted to open a restaurant or a B&B,” Lynne said.

On her 50th birthday, Lynn decided the wait was finally over. A year later, in May 2014, the bistro opened.

A Shot of Tequila

A little Italy in TLH