Weekend combo: Brunch and spirits at World of Beer 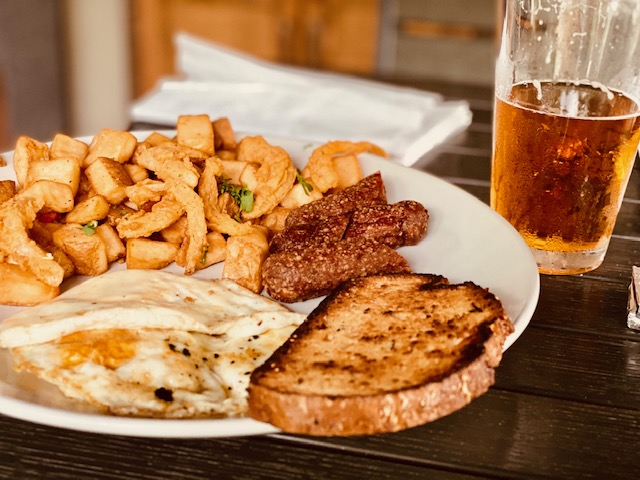 World of Beer Bar & Kitchen may be best known for its huge selection of brews and its tavern atmosphere, but here’s another reason to visit: Brunch on Saturday and Sunday. There’s a covered outdoor patio, which is perfect if you want to go out on a rainy morning. Arrive early, and you’ll have your pick of tables.

World of Beer started in Tampa in 2007 when best friends Scott Zepp and Matt LaFon were having a couple of craft beers and talking about their future. We’re told the original location started as a retail store but evolved into a neighborhood tavern when the guys noticed customers were looking for a place to sit, talk beer and spend time with friends. In 2010, Ben Novello and Jim Pollard joined the team and stepped up the growth. There are currently 50 locations nationwide and one site in Beijing.

Jason Frimmel and Sean Githens, franchise owners of the Tallahassee site, remodeled and renovated the former home of Genghis Grill. The casual pub setting is accented with wood, offers lots of booths, and has attractions like the Topgolf Swing Suites. WOB has 22 TVs, with four on the patio.

As for spirits: For a twist on a mimosa, the server brought a morning cocktail made with coconut cream, pineapple juice, and Brut sparkling wine. You can also start your day with a beer — WOB has 45 tap lines, more than 200 beers in the cooler, and at least 100 liquors. Brews include selections from Proof Brewing Company and Deep Brewing Company in Tallahassee, Oyster City Brewing Co. from Apalachicola and Tampa’s Cigar City Brewing.

Here are a few more pictures from our visit to World of Beer.