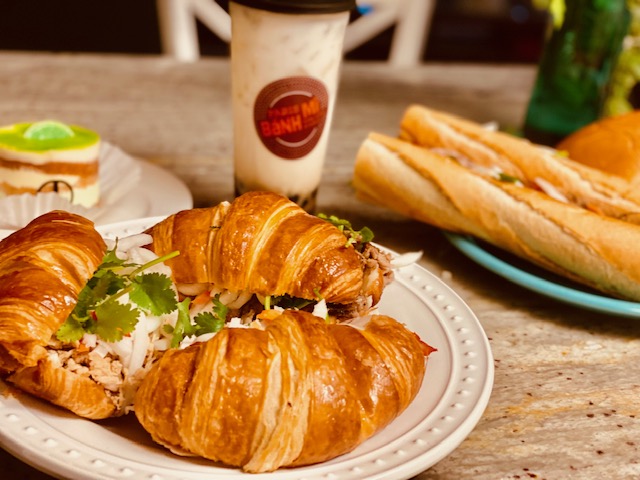 The wait for Paris Bánh Mì is finally over. For those of you who complain about too many pizza or taco places in the capital city, here’s a new culinary experience.

Balloons and lots of flower arrangements marked the shop’s grand opening on Feb. 28. LoAnn and Hoang Nguyen, and their son, Kenny Nguyen and his wife Katie, are behind the Tallahassee branch of Paris Bánh Mì and they were busily working to take care of all the customers flocking to the space on their first day.

The original Paris Bánh Mì was founded by Hien Tran, who grew up in Paris, and his wife Doan Nguyen, who owned a chain of bakery shops in Saigon. Together, they launched a shop in Orlando in 2019 and they’ve since added about 15 sites from Florida to California.

But the connection between French and Vietnamese cuisine goes much deeper. While European missionaries were in Indochina as early as the 16th century, Vietnam was officially part of the French colony called Indochina from 1887 to 1954.

The influence of French cuisine on Vietnamese fare can still be seen in dishes such as the Banh Mi sandwich.

The French-Vietnamese hybrid is classically made with a French baguette filled with items like pork roll, pork belly or steamed pork or shredded chicken, along with pâté, buttery rich mayo, cucumber, jalapeños, pickled carrots and daikon radishes, slivers of cucumbers, cilantro and a house sauce. The fresh herbs, vegetables and refreshing flavors mark Vietnamese cuisine. You can also get the sandwich on a croissant or burger roll (don’t mistake it for the usual American beef burger). You can also get a vegetarian version

The counter-serve space also serves an assortment of drinks such as flavored or boba teas, fruit slushies, milk teas and coffee. One of my favorite drinks is the Paris by Night (who could resist the name), made with whole milk, boba – these little silky pearls are made from tapioca starch – with brown sugar. Their iced Jasmine tea will perk up your day.

The display case is filled with a variety of pastries, including cheesecakes (two are the crème brûlée or caramel), chocolate cake and Key lime confection.

There’s also a wall of packaged croissants and other baked goods.

On the other side of the wide open space is a row of Vietnamese grab-and-go snacks.

Paris Bánh Mì is a takeout space though there is a small counter where you could eat a snack or sit while you wait for your order.

Check out delightful food and cocktails at intimate Bar 1903