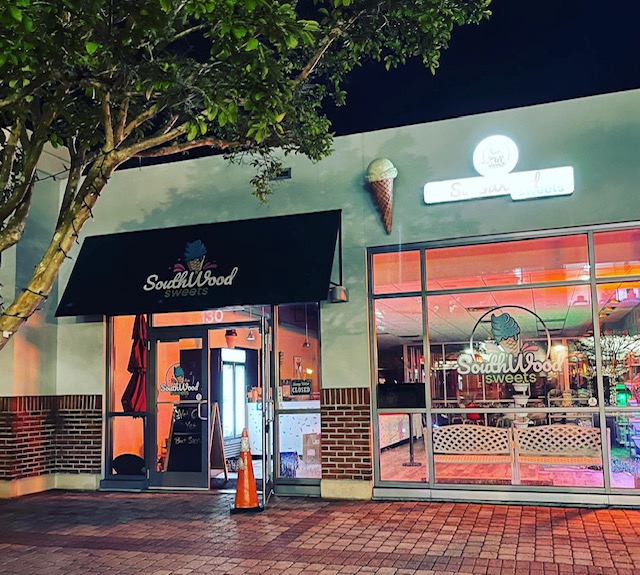 The ice cream parlor serves more than a dozen flavors, cakes and cupcakes from a local baker and lots of candy

Here’s the scoop: A dessert destination has opened in Towne Center Plaza in Southwood.

SouthWood Sweets is already getting a big welcome from parents and kids of all ages, especially this time of year. Cooling off with an ice cream cone is one of the pleasures of a summer’s day – or night.

The new shop offers ice cream and candy (by the bulk and other sweet goodies) as well as cupcakes and slices of cake from popular Southside baker Jennifer Young, owner of TC Bakery.

Shannon said customers told her about TC Bakery and “I fell in love. I saw all of her different flavors and I said ‘You had me at banana pudding cake.’ “

As for the ice cream, the shop is featuring a couple choices of soft-serve as well as 16 flavors of hand-dipped ice cream, which include Extreme Moose Tracks, Coconut, Cookies ‘n Cream, Mint Chocolate Chip, Birthday Cake and Rainbow Sherbet (dairy free). Vegan flavors are cookie dough and vanilla. Check the website for the list of flavors, which are updated weekly.

SouthWood Sweets offers a private room for parties (with party packages) or meetings with room for 50 people.

“When we were raising our kids, they went to parties at Chuck E. Cheese,” said Shannon. “There’s nothing on this side of Apalachee Parkway.”

The addition of the new Southeast Park should also help meet the demand of a gathering spot for kids and families, Shannon said.

The park, expected to open this summer (‘22),  will be built on a 62-acre parcel bordered by Tram Road, School House Road and Four Oaks Boulevard. The much-anticipated space includes a basketball court and playground, as well as five sand volleyball courts, six pickleball courts and a multipurpose athletic field so there can also be soccer and football games. The park will be home to the City’s first full-sized cricket pitch.

A longtime tax accountant, Shannon and her husband, Eli, have been coaches for youth programs in Tallahassee for 28 years. The parents of four children, now ages 19 to 28, the Rosiers helped the YMCA by coaching soccer, basketball, baseball and softball – “whatever they needed,” she said.

Shannon and Eli have coordinated many scholarships for low-income students, volunteer opportunities, and continue to help student athletes make the connections they need to achieve their athletic passions.

“We offered our girls exposure that helped lead to scholarships,” said Shannon. As a result, about 60 local female athletes received college scholarships. “Forty to 50 would never have pursued college without that opportunity,” she said.

The Rosier children have been active in college sports. Daughter, Taylor, played softball for FAMU; their son Malik was a quarterback for the Miami Hurricanes; Chelsey played basketball for Prairie View A&M in Houston; and their youngest daughter, Jordan, is a basketball player at University of South Alabama.

With her youngest now in college, it looked like a good time to open a business, Shannon said. She was originally considering an ice cream franchise but got a better idea. Realtor Josh Kasper suggested she open her own ice cream shop in Southwood, Shannon said. He thought it was a great addition to the area. She agreed.

“I wanted to bring joy and smiles on kids’ faces,” Shannon said.

You could say the same about their parents.

The Capital City Chamber Of Commerce is presenting a ribbon cutting ceremony at 1 p.m. June 23 at Southwood Sweets.