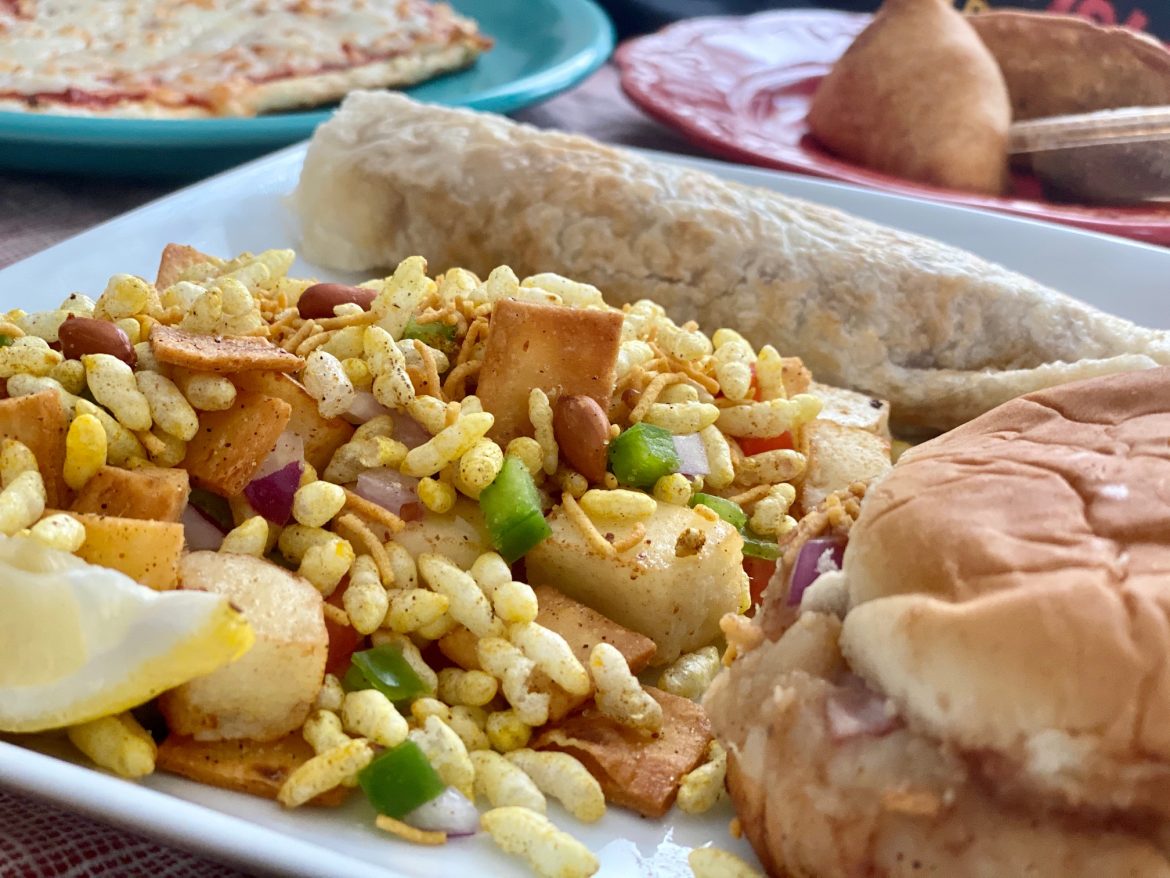 When Tarun Gupta and his friends were in college, chowing down the typical choices from fast food joints, they joked about an idea.

“Why not an Indian fast food place?” said Tarun. “You see Chinese fast food. Mexican. So many cuisines but not Indian.”

Until now. Tarun and his friend, Drew Rudolph, believe they’re at the forefront of what could be the next fast food craze: inexpensive, quick but quality Indian street food.

The young entrepreneurs have started with Naantheless, a counter-serve spot in the University Village Shopping Center (next to Paper Fox Coffee shop) on Pensacola Street.

“We went into it with the grand vision that if this works, we can become a fast food chain,” probably expanding to college markets, said Tarun. “The first step is making sure that this location is doing well.”

Launching with a soft opening on Sept. 18, Naantheless offers a limited menu of six items plus desserts, drinks and snacks, like India’s Magic Masala potato chips from Lays (so addictive) — with the actual price of 20 rupees on the bag (27 cents in U.S. dollars) — Kulfi (Indian ice cream on a stick), smoothies, Indian beverages and Taj Mahal beer and the local brews  Spear Pressure and Reef Dweller from DEEP Brewing Company. And one other thing, I liked the restaurant’s T-shirt so much, I bought one for $20.

Everything is vegetarian and half the items — the Sloppy Joe Akash, Chickpea Salad and Samosas are vegan.

The prices range from $2.50 to $5, making it easy to experiment and appealing to students looking for a speedy bite on the go. My husband and I purchased six items and our bill was $22.20 with tax.

The Naantheless mascot is a whimsical elephant named Akash and the slogan is “Indian Food Made Simple.” The idea is making exotic dishes accessible and affordable to those who have never tried the captivating flavors of Indian cuisine. Many of the items on the menu are the foods Tarun came across in his city of Dehradun India when he was a young boy.

“During the day there was not a ton to do so my cousin and I would walk along the streets,” said Tarun. “We weren’t really going anywhere. Just hanging out. There were all these vendor carts and tiny hole-in-the-wall restaurants selling Indian snacks like samosas, bhelpuri and those Magic Masala chips.”

Tarun’s family left India when he was about 5 years old and they moved to Tallahassee, where he started Sealey Elementary and later attended Rickards High School. Tarun graduated from the University of North Carolina at Chapel Hill then got a job working in education consulting in Silicon Valley. It was there, after getting more positive feedback about his idea from fellow professionals, that he decided to pursue his vision of serving Indian fast food.

The dream has become a reality but it’s been made all the more complicated by the pandemic. Tarun signed a lease for his storefront eatery in January and he and his father began renovating the former pizza restaurant. His college friend, Drew, joined him in March just before the onset of Coronavirus shutdowns.

“Most college students were out of town, people weren’t eating out much, so we decided to wait till fall to see if things were back to normal,” said Tarun. While things aren’t exactly normal, he and Drew are “cautiously optimistic.”

They’re starting with limited hours for now from Monday to Friday, regrouping on the weekend, but they hope to eventually be a night place choice for hungry students.  It’s mostly takeout but there are a couple tables inside and outside.

What helps set Naantheless’ menu apart in the fast food world is that these dishes are homemade.

“For the most part all these recipes are my mom’s,” said Tarun. “We started out learning from her because we had zero cooking experience.”

Now Tarun and Drew do all the cooking, tweaking the traditional recipes a bit, and the results are impressive, starting with their own, made from scratch tamarind-based “brown sauce.” It’s flavorful and well-spiced without being overwhelming, so good you’ll want to slather it on everything. The other option is a “red sauce,” a Maggi hot and sweet sauce.

We dipped our savory samosas into these sauces and gobbled them up. Samosas are a signature street food pairing a shell of crunchy fried dough with an aromatic potato filling. The counterpoint of textures helps make these so beloved. An order of two samosas is $3.50 and there’s no skimping on size..

I’ve ordered Bhelpuri in various Indian restaurants and cooks always have their own twist. At Naantheless, it’s a fun mix of puffed rice, peanuts, crisp potato noodles and fried tortilla strips garnished with fried cubes of paneer (a soft cheese that’s a staple in Indian cuisine), chopped onions and bell peppers. I can imagine students eating bowls of this while studying. I can certainly imagine myself eating mass quantities while doing nothing.

The Sloppy Joe Akash is Naantheless’ take on the messy sandwich — though it’s not as hard to eat — with spicy potato filling, onions and crisp potato noodles on a hamburger bun. A hearty treat.

We also liked our paneer wrap — flaky dough filled with onions, bell peppers and paneer cheese– and a “Naan-traditional pizza” with a tomato sauce and cheese spiked with Indian spices on naan bread.

Learning to make pasta from a pro

Getting to know our local farms — and farmers