Diet and diabetes: healthy tips we can all use 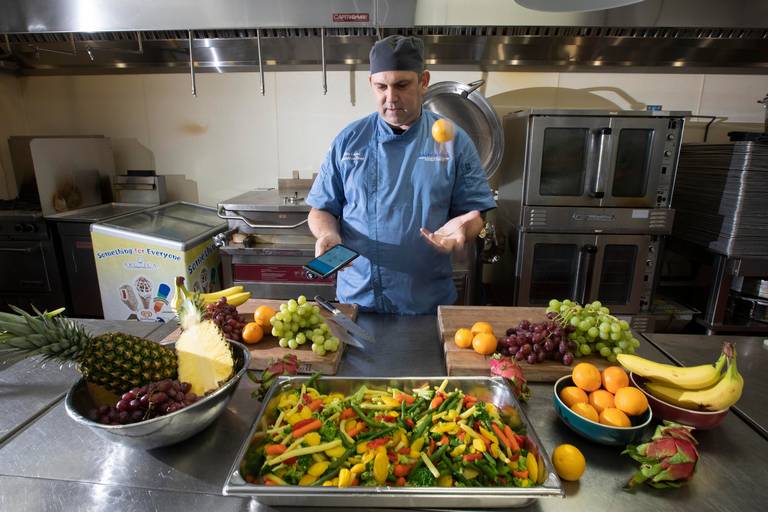 This is a story I wrote for the Miami Herald but I’d like to share it here because I think we can all benefit from this information from chef , Ciro Leoni, who has prediabetes, and hospital dietitians who specialize in diabetes treatment. At the bottom is a recipe for sweet potato casserole from registered dietitian Sonia Angel, diabetes and nutrition center liaison at Memorial Regional Hospital.

From the time he was a boy growing up in Rome, Ciro Leoni found joy in cooking and eating fabulous food. He later became the chef of his own restaurant in Tuscany and is now the director of food and beverage and executive chef at Hotel Arya in Coconut Grove.

So it was all the more difficult for Leoni to realize his world, built around food, would have to take a detour. The 53-year-old learned he had prediabetes.

“I’m in the kitchen and I taste everything,” said Leoni, who moved to the United States from Italy 11 years ago. “I gained a lot of weight.”

He also quit smoking, thanks to his 7-year-old daughter who did not like her daddy smelling like cigarettes. It was a good move but he ate more to compensate.

Leoni developed rashes and high blood pressure, and had difficulty making changes to improve his health.

“What I was doing wasn’t sufficient,” said Leoni. “I had to learn to discipline myself.”

At the suggestion of a friend, Leoni went to see Dr. Michelle Pearlman, assistant professor in the Department of Medicine, division of gastroenterology and hepatology at the University of Miami Miller School of Medicine.

“I went to a lot of other doctors before but they didn’t have the key to reach my mind,” said Leoni. He credits Pearlman’s guidance and confidence in him for a large part of his success.

“She told me I can do it.” In a few years, Leoni lost more than 20 pounds. The rashes have disappeared and his blood pressure has improved.

“He’s done phenomenal,” said Pearlman. “He’s always around food. He had to learn to use his other skills so that he didn’t have to taste everything.”

Those skills include “using the smells and colors and the noises of food,” so he didn’t need to sample as many dishes.

He changed his eating habits at home as well, cutting back on sugar, salt and fat. “I eat more chicken and fish, more soups, salads.”

Leoni now incorporates exercise into his schedule, walking as much as possible, taking stairs instead of elevators.

Leoni joked that he does “cheat once a week” to have pizza with his family, but “I immediately go back to my diet.”

“It’s never too late,” he said. “There’s a lot of food we can eat without damaging our bodies.”

It’s a lesson Leoni wants to share — with good reason.

About 1.5 million Americans are diagnosed with diabetes every year, according to the American Diabetes Association. In 2015, 30.3 million Americans, or 9.4 percent of the population, had diabetes. Of that number, 1.25 million children and adults in the United States had type 1 diabetes and the rest had type 2.

Diabetes experts explain that with type 1, primarily diagnosed in children and young adults, the body does not produce the hormone insulin, necessary to get glucose from the bloodstream into the cells of the body. Patients with type 1 need insulin therapy and other treatments to manage their condition.

With type 2, the body doesn’t use insulin properly. The diabetes association notes that some people are able to control their blood sugar levels with healthy eating and diet while others require medication and insulin.

Another 84.1 million have prediabetes, a condition that if not treated often leads to type 2 diabetes within five years, the Centers for Disease Control and Prevention stated in its 2017 report. In addition, nearly 1 in 4 adults living with diabetes — 7.2 million Americans — didn’t know they had the condition.

“There is no specific diet for diabetes,” said Angel, who advocates a “holistic approach” to treating diabetes. “We also have to incorporate exercise. Healthy eating and exercise go hand-in-hand.”

Being overweight or obese increases the risk of diabetes, but even a modest weight loss of 5 percent can show benefits, said nutritionists.

“If you lose one pound a week, that’s 52 pounds in a year,” said Gina Sweat, a registered dietitian at Cleveland Clinic in Weston. “You’re more likely to keep it off.”

The role of nutrition in treating prediabetes and diabetes is increasingly gaining recognition.

A recent report from the American Diabetes Association titled, “Nutrition Therapy for Adults With Diabetes or Prediabetes: A Consensus Report,” found that “strong evidence supports the efficacy and cost-effectiveness of nutrition therapy as a component of quality diabetes care, including its integration into the medical management of diabetes.”

A healthy meal for someone with diabetes is generally the same as a healthy diet for anyone: avoiding processed foods that are high in sugar, salt and fat in favor of more vegetables and fruits, lean protein and less starchy foods.

“There are a lot of misconceptions or myths about fruit” and diabetes, said Duenas. The body will more quickly absorb sugar from candy or ice cream but fruits have water and fiber and sugar from fruit will be absorbed at a slower rate.

Still, some fruits have more sugar so just watch your portions. She recommends a half-banana as a portion, a half cup of mango, a small apple. “Guava fruit is fine though the paste concentrate has more sugar,” said Duenas. “The fruit with the lowest sugar are berries — blueberries, strawberries, raspberries.”

Dietitians stress that portion control is vital but “little changes make a big difference in the long run,” said Duenas.

This is especially true when confronting a lifetime of eating habits.

“I grew up eating rice every day,” said Sweat. “But you can mix vegetables with rice. Completely eliminating certain foods is unrealistic but we can cut back and learn new combinations.”

“If you’re eating sweets every day, start by cutting back to three times a week,” she said. “Look at healthier choices like having a piece of fruit instead of ice cream or berries with a dollop of whipped cream.”

“We’re running around like crazy people multitasking and eating while we’re working,” she said. “We’re not really enjoying our food and understanding what we’re eating.”

She stresses the need for more people to read nutrition labels. “We’re not taught how to read a nutrition label. We think something’s healthy but you have to turn over the packaging and know how to interpret the numbers.”

The U.S. Food and Drug Administration is one source to help decode nutrition labels.

And diets that are too restrictive “are not a long-term approach,” she said. “The best diet is the one people can follow for the rest of their lives.”

TIPS ON PREVENTING OR MANAGING DIABETES

▪ “There is no one magical food,” said UM’s Pearlman. Instead eat a rainbow of foods from all the food groups.

▪ “No liquid calories — no regular soda, no juices or sweet beverages,” said Memorial’s Angel. “My practice has shown me that kids get almost 30 percent of the calories they consume from sweet beverages.”

▪ Load up on vegetables including spinach, kale, broccoli, collard greens and Swiss chard.

▪ Add healthy fats like nuts and avocados but eat them in small portions. Toss a few walnuts, almonds, pistachios, chia seeds, sunflower and pumpkin seeds on a salad or have a handful as a snack.

▪ Cut back on starchy foods like potatoes, corn, yucca, pumpkin and malanga.

▪ Eliminating gluten isn’t necessary for everyone, said UM’s Pearlman. Unless you have celiac disease, gluten sensitivity, a wheat allergy or other gluten-related disorders, you don’t have to eat gluten-free foods. It’s become a fad and these items are often more expensive.

Sweet potatoes are one of my favorite foods. They are considered a super food because of the rich content of nutrients.  They are loaded with Vitamin A (more than 400% of your daily requirement), fiber, anti-oxidants (which help combat aging and disease), and anti-inflammatory agents (helps relieve inflammation in your body).

A pinch of nutmeg or Pumpkin Spice