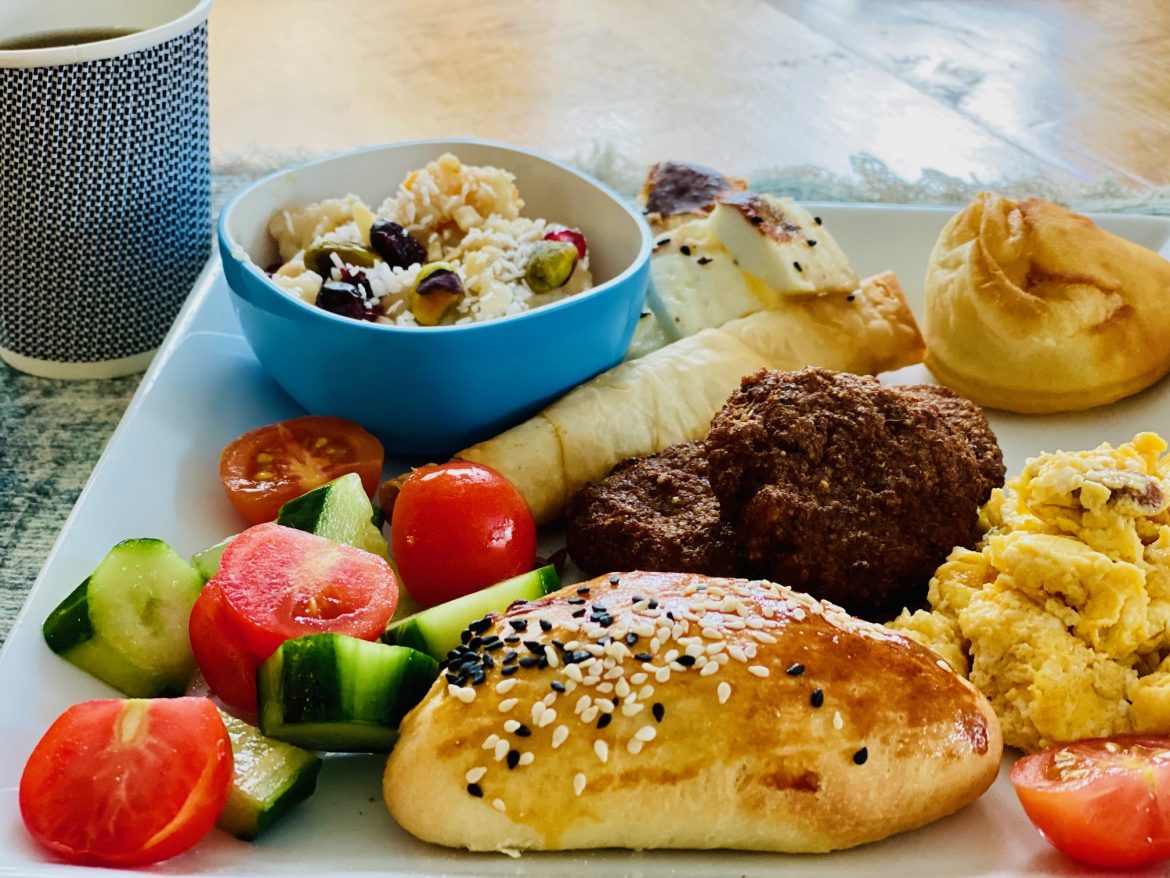 The restaurant is bringing modern Turkish fare to Tallahassee

The restaurant is already getting raves, selling out many of its dishes before closing time even though the owners don’t yet have a brick-and-mortar building. All meals are prepared inside KitchenShare, the commercial kitchen in Frenchtown’s Heritage Hub, and your food is brought out by the chef, Dondu Dogru, and delivered curbside.

“I’m really excited about it,” said Dondu, who launched the business with an assist from her husband Tarik, who teaches in the Dedman College of Hospitality at Florida State University. “We will be doing special things every time and we will serve really fresh, healthy food with a lot of flavor.”

Blue Turkey, which opened in mid-January, has been serving lunch and early dinners on Thursday and Friday. On Feb. 14, Dondu added “Brunch in a Turkish Village,” a feast of nearly a dozen items and Turkish tea. We haven’t had anything like this in Tallahassee.

When Dondu is preparing these dishes, her husband said he feels transported back to Turkey.

“If you asked me what meal I could eat for the rest of my life it would be breakfast or brunch,” said Tarik. “I could eat this food forever.”

My husband and I stopped by on Sunday and were captivated by the array of dishes that are included in brunch, typical to what you’d find in Turkey “though it would be more excessive there,” said Tarik. “We decided to keep the number of items manageable.”

We loved it too, The eggs were perfectly scrambled and the sliced beef sausage, which some compare to a Turkish version of salami, was well-seasoned but not fiery.

The pastry items were all delicious —  pohaca (baked pastry filled with mozzarella cheese and sprinkled with sesame seeds), sigara borek (cigar-shaped rolls that are filled with feta and parsley and deep-fried) and puffy dough you’ll want to eat with jam. Dondu makes three versions: apricot, sour cherry and strawberry, all delectable.

Patties that resemble falafels are made with turkey, bulgar and spices plus you’ll get slices of white grilled cheese, toast and there’s a palate cleanser of chopped cucumbers and cherry tomatoes spiked with olive oil. My husband gobbled up containers of Turkish green and black olives. Dondu makes everything, even the dough, and gets other ingredients from companies that import products from Turkey.

The brunch costs $24.95 for one serving and $46.45 for two. My husband and I shared just the single, $24.95 portion and felt plenty satisfied though we might get the bigger version next time.

The parents of two small children, Dondu is originally from Cappadocia in central Turkey and Tarik is from the ancient, Southern city of Antioch.

The couple met in college in Turkey when she was a freshman and he was a sophomore. She graduated with a degree in business administration and worked as a financial advisor. Tarik got his masters in Turkey, but wanted to pursue his doctorate in the United States.

When the couple left for South Carolina, where Tarik got his Phd, Dondu said she didn’t know what to expect.

“I thought it would be like the movies,” she joked. It was challenging to move to a place where she couldn’t speak the language but she quickly started English classes. Tarik then worked as a professor in Boston before the couple moved to Tallahassee.

Dondu said she’s been wanting to start her own restaurant “forever. Now is the time.”

“Growing up, I was the de facto sous-chef at home helping the executive chef, my mother,” Dondu wrote on their website. “While I was learning the key components of cooking during my informal training, I also learned that the essentials of cooking go beyond the ingredients and instructions.”

And the couple adds their sense of humor to the business.

And the couple adds their sense of humor to the business.

Her enthusiasm for this labor of love is clear.

Tarik has created a logo of a turkey cowboy riding a horse. “There are no cowboys in Turkey,” he said. And as for the blue part of the restaurant’s name: “It’s random.” But hey, it all works.

On another trip to Blue Turkey for lunch, we started with the “Red Fire” dip of crushed vegetables, tomatoes, onions and zingy spices that will tingle but not numb your tongue, served with pita chips.

Consider doner a Turkish version of the gyro or shawarma. The doner kebab has become popular street fare beyond Turkey and is served in Berlin and European cities. Both the chicken wrap doner and the Berlin doner were fat with meat, red cabbage, chopped dill pickles, lettuce and French fries (inside the wrap). It’s served with flavorful “yummy beetsy” sauce made with beets and yogurt and the pink one is red sweet chili pepper but neither is really spicy.

One of the vegan dishes here is known as cig or chee kofta, which Tarik likes to call the Space Shuttle. They’re layered with pepper paste, tomato paste with pomegranate syrup and spices wrapped in a flatbread with lettuce and red cabbage.

We finished with a delicious sweet Cheezlava, the light, flaky crust laden with honey and nuts. Dondu says it’s like baklava “but much better.”

Tallahassee Table reader Lisa Lazarus Brown, who went to Blue Turkey on opening day, said it was “Very fresh, good food!! We got a little bit of everything. The Space Shuttle is a great favorite as well as the pink garlic sauce! Red Fire is not hot, but a great spread and dip! Do not miss the cheezelava for dessert!!”

For Dondu and Tarik, KitchenShare is the perfect way to introduce a new restaurant. The site is a certified communal kitchen set up to help launch entrepreneurs but they are planning to open their own business.

They expected to launch in March 2020 but put their plans on hold due to the pandemic. Since they are dealing with takeout and delivery (through a third party) and not dining in, they decided to go forward.

“At Blue Turkey Restaurant, we serve modern Turkish food inspired by authentic recipes passed down through generations and blended with prominent Turkish hospitality that will be craved for by everyone.”

FYI: You order your food in advance and pick it up on Thursday, Friday or Sunday. If you order by Tuesday, you get 10 percent off your bill.

Any Turkish Pizza? I fell in love with it when I lived in The Netherlands

I don’t see that on their menu yet but they’re starting out small and they’ll be doing specials. I’m guessing they’d be interested in taking requests. Hope you enjoy it! Would love your feedback.

Dear Richard, thank you for your interest! We are not currently serving Turkish Pizza but it will definitely be served on our weekly specials soon. We also cater to events and offer variety of food from Turkish and American cuisine. Just let us know and we will be happy to serve you! In the meantime, check out out menu at www. blueturkeyrestaurant.com and you can place your order in advance. Can’t wait to serve you!
Best,
Dondu

I hope Blu Turkey will be opening again soon. Thank you for responding!