Sushi 101: A guide for beginners from 2 fans 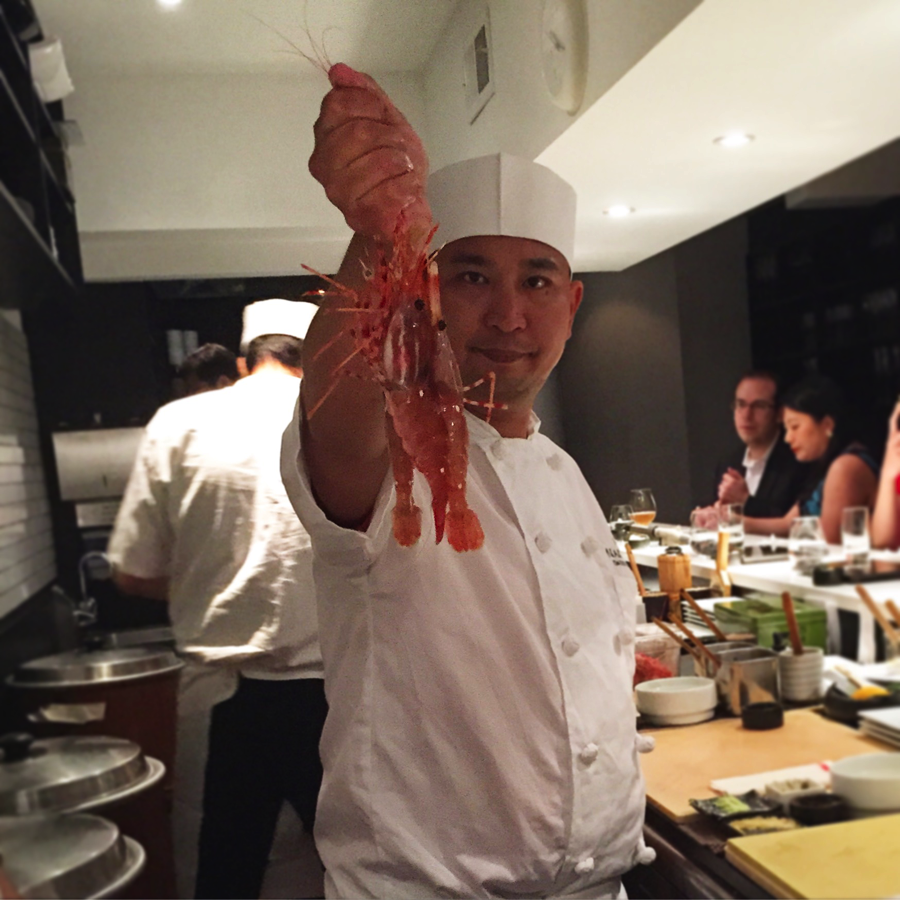 We asked our son and daughter-in-law, who have become sushi fanatics since moving to New York, to share some of what they’ve learned. We hope this information can help you find the best sushi in the Capital City and beyond. – Rochelle Koff

By Davis Ward and Julia Zhang

For many people in the United States, going out for “sushi” means feasting on elaborate rolls of rice stuffed with raw fish — plus vegetables like avocado or cucumber, and covered in rich sauces such as spicy mayo, and filled with crunchy flakes or cream cheese.

But just as authentic Mexican or Chinese foods have little in common with their Americanized versions, a real sushi experience is quite different than what you get with a JB or California roll.

It’s something that took me a while to figure out. I remember first developing a taste for sushi in the late 90s when places serving it were popping up all over South Florida, where I grew up. I used to get those big, heavy rolls, then mix wasabi and soy sauce together, put ginger on top of the roll and mix it all together to make a scrambled, salty, spicy mess.

It was good. But that was not, as I learned later, the best way to do it.

When I moved to New York about 10 years ago, colleagues took me to sushi places that served up a more authentic experience, and I’ve become somewhat obsessed. OK, I’ve become really obsessed. Seeing the documentary “Jiro Dreams of Sushi” and going to Japan a few years ago only fanned the flames.

Here are a few things I’ve come to learn and appreciate about what is my favorite food, in no particular order: 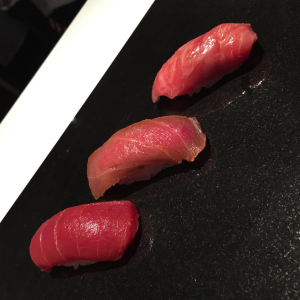 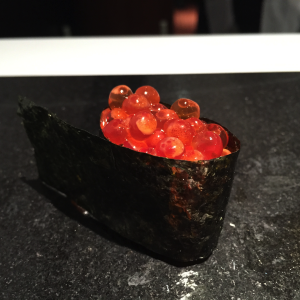 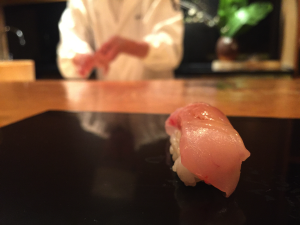 Nigiri at Ichimura at Brushstroke in New York. – Julia Zhang 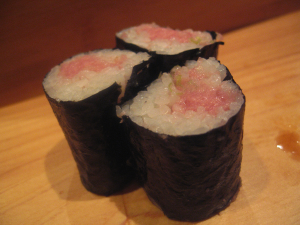 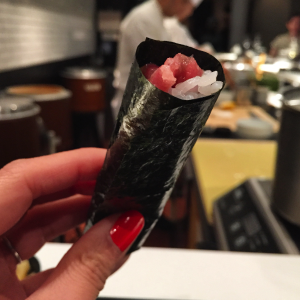 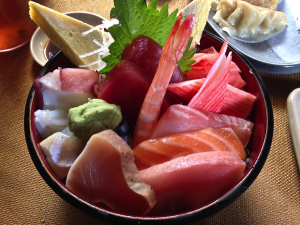 Fresh, local – or not

Sushi doesn’t necessarily have to be “fresh.” In fact, the best sushi places will serve fish that has actually been aged a few days. Just as a fine steakhouse will age beef (though for much longer than fish) to intensify the flavors, fish for sushi needs a few days for enzymes to break down and tenderize the meat.

If you were on a Japanese fishing boat, caught a tuna and filleted it and ate it right there, you’d be chewing on a relatively flavorless, chewy piece of flesh (not to mention ruining a fish that could sell for tens of thousand of dollars or more at the Japanese fish market).

Aging it for a few days at the sushi restaurant allows its delicate flavors to come out. Some dishes are even marinated – mackerel often in a vinegar marinade to mellow out its harsher flavors.

And it’s a food where local isn’t always better — better is just better. Chefs in NYC will fly in frozen fish from Japan because that’s where the best fish for sushi comes from. Few pieces of fish are served truly fresh – they’re deep-frozen on fishing vessels to kill bacteria and parasites and to preserve them, then thawed out and aged. The deep freezing is why the raw fish is safe to eat.

Before the invention of refrigeration, in fact, all sushi was deeply marinated in soy sauce or vinegar to preserve the food. The most traditional sushi in Japan is more marinated and salty-tasting than the fresher style you see in modern restaurants.

However, some dishes – shellfish like scallops or shrimp, for example – are best as fresh as possible. At Sushi Nakazawa in New York, the chef will often cut open a live scallop right in front of you, set it on the sushi rice, touch on a bit of yuzu citrus sauce, and serve it right there. It’s absolutely delicious, even as the scallop wriggles in your mouth. He does something similar with the botan ebi shrimp, a large, sweet prawn – often garnished with caviar – that is one of a sushi restaurant’s greatest pleasures. 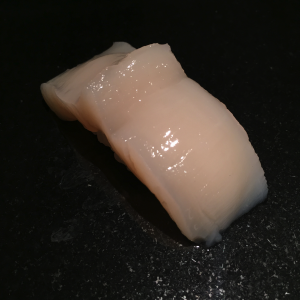 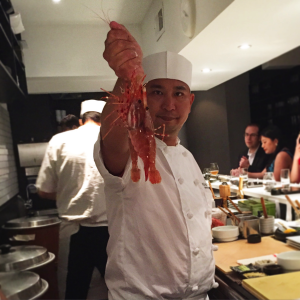 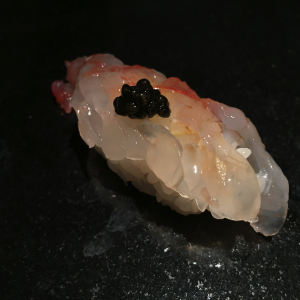 The rice is critical. While having great quality fish – prepared in just the right way – is important to a great piece of sushi, so is the rice. It has to hold together without congealing into a formless blob, but you should be able to feel the individual pearls with your tongue as 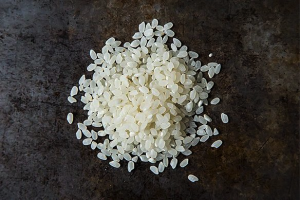 you taste it. It should have its own, delicate flavor, but support and bring out the flavor of the fish. Making good sushi rice is an art form – you need to use a special grain, cook it with the right amount of vinegar, and serve it at just the right temperature, then mold it in just the right way. Rice is what distinguishes a great sushi restaurant from a merely good one.

A good sushi place will offer you a unique dessert: tamago. This is an elaborate omelet – eggs cooked with ground Japanese sweet potatoes, shrimp paste, and sugar. A decent version tastes like curiously, appealingly sweet eggs; a great version tastes like nothing else. 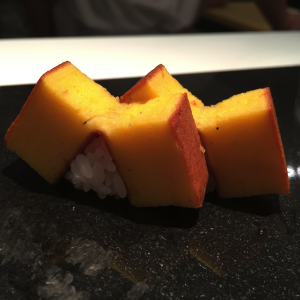 Fresh wasabi and good pickled ginger make a difference. But at most good sushi places, you won’t really need to use soy sauce or wasabi – the chef puts on just the right amounts when making it. He may get insulted if you add more sauce or wasabi on your own, but will be happy to adjust on the next pieces if you ask. Great pickled ginger works as a palate cleanser between bites – the best versions are pale yellow, thick cut and sweet, not the pink, thin ribbons you often see. 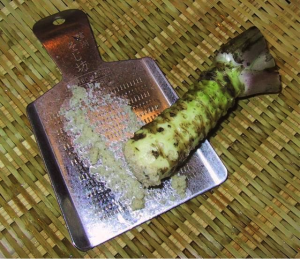 So where can you get this experience in the United States? Your best bets are going to be New York City, San Francisco, and Los Angeles – where sushi first came to America about 100 years ago. While there are other great sushi places around the country, these cities have high concentrations of Japanese immigrants and fantastic fish markets – with access to the best ingredients from around the world.

Find a traditional omakase place and sit at the bar. It’s the best kind of place to eat alone, focusing on the food, what the chef is doing in front of you and nothing else. Open your mind and put your trust in the chef’s hands. 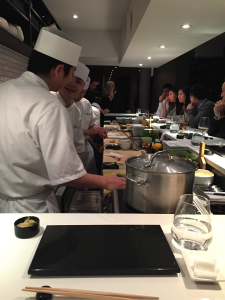 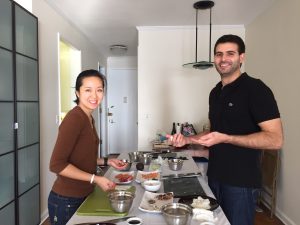 Julia Zhang and Davis Ward at a sushi-making class.

It’s interesting to learn that the best sushi places will service fish that has been aged a few days. My wife and I are planning to try sushi for the first time in Japan and we were wondering how old the raw fish is that we would be eating. I’ll let her know that we should expect the fish we’ll be eating to be a few days old.

Thanks for reading and have a wonderful trip!