Game for something different? The Huntsman aims for adventurous dining 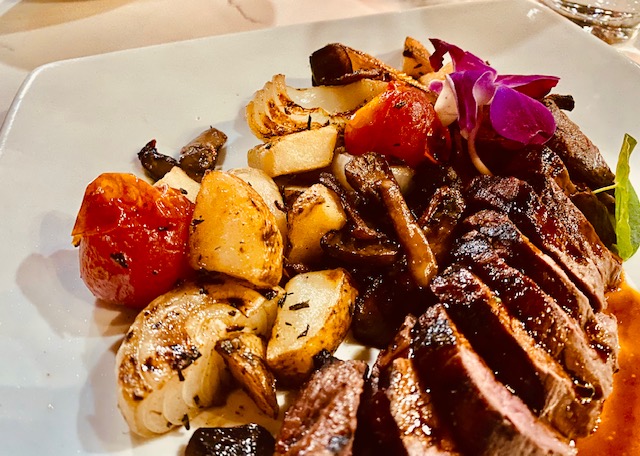 Menu specializes in game, vegan dishes along with other meat and seafood choices

The restaurant just opened on July 11th in the former home of Cypress, but we couldn’t wait to try it. So we went with friends Alix and Alex for the restaurant’s first Saturday evening operation. The place was swamped, but servers were attentive, keeping tabs on our water glasses and before we ordered, asked if we had any food allergies. Items are marked if they’re gluten-free or vegan.

If you think we have too many pizza, burger or taco spots in Tallahassee, you’ll be ready to sample this more unusual menu, which puts a spotlight on “wild game, field & stream to table and vegan and vegetarian fare.”

We weren’t sure what to expect but discovered we liked venison backstrap, octopus with red deer chorizo and kale with wild boar bacon.

Despite its name, there’s a lot more to The Huntsman than its game menu items. In fact, those items represent a small portion of The Huntsman’s seasonal menu at this point. Their other specialties include wagyu short rib, duck breast and seaside pot pie. Vegans and vegetarians will find choices such as spring vegetable Pad Thai and wood-fired cauliflower steak.

The venue is the creation of co-owners Danny Renninger, Ben Williamson and executive chef Skylar Stafford, who all worked together at the fine dining restaurants Sage and Il Lusso.

“We wanted to do something a little different,” Danny said. “We came at it from a variety of angles. I like finer foods and wine pairings and my two partners grew up in Tallahassee and come from hunter families.”

“We found that game animals have lower cholesterol, lower fat and higher protein than chicken,” he said. “You can eat quality, clean meat that you don’t have to feel bad about eating. It’s better for the environment and better for humans.”

We started with an appetizer of Charred Octopus, smokey and tender, served with pieces of crisp red deer chorizo, bite-size roasted potatoes, garlic chips and saffron aioli. The flavors zig and zag but come together in a fine finish.

Our other appetizer was the soup du jour, a rich curry potato, packing some fire. Our friends shared the Beef Tenderloin Tips, plated with a horseradish cream and dollops of sorghum barbecue sauce. Starter choices also feature fire roasted oysters, lobster toast, seared scallops and a charcuterie board. The menu changes, especially with seasonal picks.

Our friend’s a la carte entree of venison backstrap was a table surprise. I had never heard of it before but venison backstraps are a cut of meat found along the back of a deer, alongside the spine. They’re not the same as a tenderloin but they are considered one of the most tender cuts of meat from a deer. Think of backstrap like rib-eye in beef or loin in pork cuts. It’s a six-ounce portion — delectable, deep-flavored.

If you’re concerned about game tasting gamey, our dishes did not.

My husband enjoyed his South Texas Antelope sirloin (pictured at the top), which he ordered chef’s choice, served medium. It was a lean cut, enhanced with a steak sauce, and sides of delicious sherry glazed mushrooms, lovely blistered tomatoes, herb-roasted tomatoes and grilled cipollini onions. The antelope is lean so if you’re used to a fat, juicy steak you may have to adjust your expectations. I just had a bite of the antelope and thought it was very good.

I ordered the mouth-watering Iron Seared Redfish, a mild flaky, fish, well-seasoned and served on a bed of rice middlins. In the Low Country of South Carolina and Georgia, middlins is the term for broken, smaller pieces of rice. It was so good I could have devoured a bowl. Other side dishes were okra (I confess, I prefer fried okra) and a treat of fun blue crab hush puppies.

Aside from entrees, which include side dishes, diners can also order a la care items like a 12-ounce bison rib-eye, Scottish salmon filet or Black Buck antelope leg filet.

Our friend Alex picked a hefty, 12-ounce NY strip from the a la carte menu. He added sides of crisp steak fries and creamed kale with wild boar bacon. Kale ale becomes richer, heartier and more interesting with this addition of wild boar.

Many of these a la carte items can be ordered nigiri style so you don’t have to experiment with a large portion. With nigiri style, a piece of meat, served seared or raw (depending on what it is) is served atop seasoned sushi rice with wasabi and ginger.

“You can create an appetizer out of some of these cuts,” Danny said. “If you’ve never had antelope and you don’t want to commit to an entree, you can have it as an appetizer.”

The game is primarily sourced from Texas’ Broken Arrow Ranch but the restaurateurs do feature fish and seafood from the Gulf and work with local businesses like Southern Seafood, among their sources.

They’ve been visiting farms and working on obtaining local fare. One farm source is Legacy Greens, which grows microgreens, owned by brothers Daniel and Jordan Miranda. They are sourcing some vegetables from Apalachee Farms and their fresh flowers from Goats & Hoes Farm.

“We’re looking forward to doing more locally, as much as possible,” Danny said.

We were too full for dessert but tempters include a bread pudding with Mexican hot chocolate (love that!), flourless chocolate cake, cobbler, sorbet, custard and crème brûlée which you can pair with after-dinner beverages.

The Huntsman also offers menus with a lot of appealing picks for early and late-night happy hours.

Get in the spirit

To complement this far-ranging menu, there’s an extensive, but not overwhelming, list of spirits.

“We’ll have wines from all over,” Danny said.

“Reds sprawl all over the world, from new world to old world to obscure to fun projects from prolific producers who may only produce a little bit of this one individual wine but it’s a good wine to show off,” Danny said. “If you’re in the mood for something fun (on the wine list) from an obscure part of the world, we probably have something for you.”

I ordered a glass of Massaya’s Sauvignon Blanc-driven blend that features Lebanon’s indigenous variety Obeïdi. It was light, grassy and summery fresh.

Cocktails at our table included Radiant Honeybee (which won raves from friend Alix) made with vodka, lemon, honey and lavender bitters, the I Don’t Even Carre with rye, benedictine, Orleans bitters and sweet vermouth (it reminded my husband of a Sazerac) and the O Bouro Borealis with bourbon, ginger liqueur, cinnamon and ruby port. Reports were that the drinks were well-made, no skimping on the alcohol.

The restaurateurs behind the 82-seat The Huntsman have done a lot of revisions. The front room has a handsome bar with mirrored tiles behind shelves of spirits and there’s also a standing bar and a small seating area.

The main dining room is a mix of booths and tables with accents of blue-green tiles, which could be reminiscent of sea and forest. A dark wood wall offsets the room. The decor is a mix of rustic chicness if you can imagine that. Among the elegant highlights are the vibrant works by Tallahassee-based artist, Paul Tamanian.

There’s a 12-seat space for a private dining area and they’re working on an outdoor patio area.

The Huntsman is an adventurous and sophisticated newcomer to our dining scene, one that’s not afraid to take chances. We had a great time on our first visit. There are so many dining choices, we’ve only scratched the surface. We’re looking forward to trying even more of the exciting menu. Welcome The Huntsman

For a glimpse of the menua, you can visit HuntsmanTallahassee.com

Parking: Due to tight space in the lot outside the restaurant, there will be complimentary valet parking.

Gratuities: The Huntsman charges an 18 percent gratuity to provide a stable base income with benefits to its staff, which is a great idea. You can also add a tip that will go directly to your server. Restaurants around the country have instituted this type of policy but I’m guessing this may be a bit confusing. I have to confess that I’m not sure how much we ended up leaving (in cash). If you liked your service, and ours were excellent, I’d suggest be as generous as you can.

Here are some more pictures of The Huntsman.