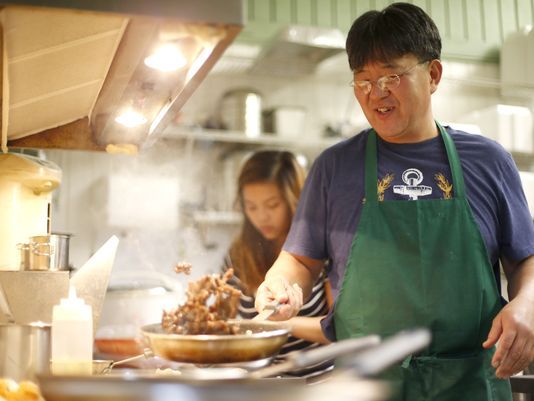 If you watched the Olympics at all,  chances are you heard a great deal about Korea’s vibrant cuisine. The XXIII Olympic Winter Games in Pyeongchang may be over , but you can indulge in the country’s flavorful fare all year long in Tallahassee.

Korean BBQ & More, owned by Seunghwan “Swan” Lee, a native of Seoul, was located in a tiny shoebox of a place on West Tennessee Street for 12 years but Lee moved to a new more centrally located site on Apalachee Parkway on June 9.

The  aromas and tastes at Korean BBQ are heavenly, the portions are big (great for sharing) and the prices are low, which adds up to a winning combo. Dishes are under $12 so it’s easy to be adventurous.

While there are a growing number of Korean restaurants nationwide, there’s no other spot like it in Tallahassee.

“Before I moved in, there was a Korean restaurant on Monroe but it didn’t stay, not even six months,” said Lee, who also owns the New Seoul Oriental Market, which  is staying at its location on Tennessee Street.  He took over the market about 20 years ago, and still travels to Atlanta every two to three weeks to buy hard-to-find Asian ingredients.

At the restaurant, Lee specializes in Korean comfort food yet, powerful flavors emerge from that tiny kitchen. 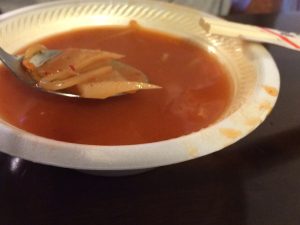 These dishes are already a bargain, but they also come with all-you-can-eat sides of fiery kimchi (fermented cabbage), kimchi soup, bean sprout salad and probably the best miso soup in the city plus complimentary beverages of refreshing roasted barley tea, icy rice malt, coffee and ice water. A can of soda is only $1. 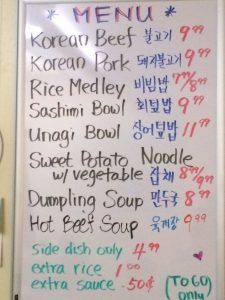 As for what enhances the miso soup, Lee uses the hot water from blanching 10 pounds of soybean sprouts in the stock. Bean sprout water is known for its thirst-quenching taste, he said. There’s no shortage of tofu and wakame seaweed in the soup.

If you’re new to Korean cuisine, flavors revolve around garlic, fragrant sesame oil, soy sauce and potent hot pepper paste. Many of these ingredients, along with Mirin, a Japanese sweet rice wine, are in Lee’s house-made sauce, a condiment that’s more tangy than numbingly hot. You’ll see many customers, grabbing the squeezable bottle of sauce.

When Korean BBQ opens at 4 p.m, fans start trickling in and head right to the counter.

Before opening the restaurant, Lee said he often volunteered to prepare dishes for church events and weddings. “I love cooking but I had never worked in a restaurant.” In Korea, he tutored students to help prepare them for college entrance exams.

“I moved right before the opening ceremonies of the summer Olympics,” which were in Seoul in 1988, said Lee, who was 29 at the time. He and his wife, KJ, moved to Indiana where he received a master’s in sports history from Purdue University.

The couple later moved to Tallahassee where KJ Lee received a doctorate degree in FSU’s music program. Lee proudly notes she’s a preeminent concert pianist and their 25-year-old daughter is an FSU graduate who will start in the university’s physician’s assistant program in the fall.

Hard-working and congenial, Lee eagerly talks about the conscientious FSU and Tallahassee Community College students who work in the kitchen and take orders at the counter.

“Everyone is laughing and happy and we start cooking,” said Lee. “I think that helps us to give our customers food that makes them healthier and happier.”

If you’re planning a visit to Korean BBQ, here’s a look at some menu highlights: 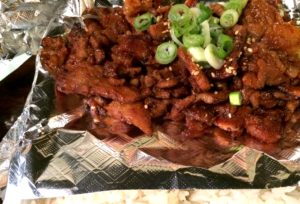 Bulgogi or Korean beef, pork: The thinly sliced ribeye, marinated in a traditional sauce, is garnished with a dusting of sesame seeds and scallions. A top seller here, the savory bulgogi is served with white rice, all offered up in a plastic foam box lined with aluminum foil. The version with pork has a little more kick than the beef. Both are addictive. 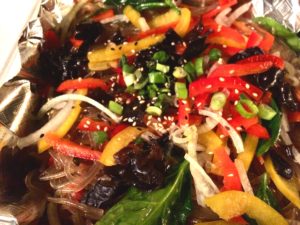 Japchae or sweet potato noodles: You’ll dream of curling up on the couch with a bowl of these lush noodles, mixed with lots of fresh vegetables, including sliced green, red and yellow bell peppers, grilled onions, carrots, spinach and tree ear mushrooms, served with rice. Stick to the vegetarian version or add beef for $1 more. 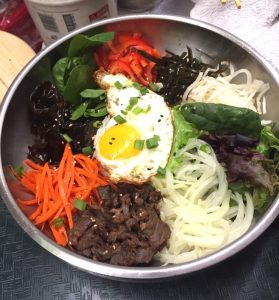 Bibimbap or rice medley: Bibimbap is a large bowl filled with a colorful array of spinach, seasoned kelp, carrots, bell peppers, tree ear mushrooms and white rice, topped with an over-easy egg. The ingredients arrive in the bowl adjacent to each other, but Lee suggests mixing the ingredients together with the house sauce, the practice in Korean homes. “Everybody getting together and sharing — that’s the concept in a big bowl of bibimbap.”

Unagi or eel: The marinated and barbecued fresh-water eel is prepared with stir-fried onions and carrots, finished with eel sauce and a sprinkling of fish eggs, served with rice and spinach.

Sashimi bowl: This summer-fresh dish brings a bright medley of fresh vegetables with cubed izumidai (farm-raised in Taiwan). Another good choice for sharing.

Kimchi: You can load up on this famous Korean staple of fermented cabbage as a complimentary side. Kimchi also stars in the spicy house-made soup, which gets a boost from Asian radishes, onions, kelp, sprouts and dried anchovies.

Don’t forget beverages of roasted barley tea, served chilled like iced tea, or icy rice malt (with the texture of a slushie). Like much of the food, they’re simple pleasures, part of the special experience at Korean BBQ. 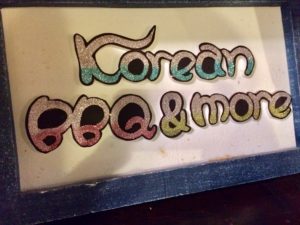 Romance on the Menu

I love the mushrooms from Play of Sunlight. I very much want to talk to them. Thanks for reading Tallahassee Table.