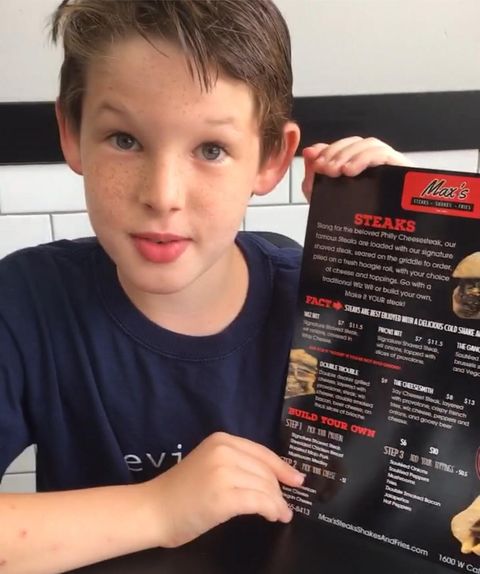 The Tallahassee 10-year-old is sharing his experiences — and ratings.

Levi Harris is a fifth grader who likes math, science and social studies. His hobbies are hunting, fishing and “fixing stuff.” But he also has one more passion: eating — and writing about what he eats.

At 10, Levi has become a junior restaurant critic. He shares his reviews on his own YouTube channel and on Facebook under the name, Levi Eats. He also has business cards and a T-shirt. His logo is a colorful cheeseburger with a smile.

Why would any kid want to write restaurant reviews?

“It’s fun and nice to share information about local restaurants,” said the spunky young food connoisseur. “And, yes, I do love food.”

Levi’s favorite dishes are hamburgers, pizza,  ice cream — and rice. But he’s a good sport about going beyond his comfort zone.

His suggestions for diners, as told to his mom (his parents are careful to monitor his access to social media at his young age).

1. Wait until your broccoli cools down before you eat it.

2. Just go into it knowing that noodles are awkward to eat.

Levi has now done 12 reviews — some aren’t yet posted.

Talking about the likelihood that critics may have to eat food they just don’t like, Levi mused “I can see where being a critic could have a bunch of downsides. It’s a good thing I like reviewing restaurants.”

Levi’s critiquing enterprise was launched during the pandemic,  said his mom, Tammy Harris, who is a forensic social worker for the Office of Criminal Conflict and Civil Regional Council. Levi’s dad, Shannon Harris, is a project manager with the Department of Transportation.

“We enjoy watching cooking shows as a family,” she said. “He would rate the foods based on how they looked to him so I started thinking, ‘Why not let him do it for real?’ ”

Tammy said the reviews were also a way of “bringing awareness to local restaurants” that have been hit hard by Covid-19.

Tammy videotapes Levi during meals while Shannon provides verbal prompts to keep the conversation going. The camera captures Levi’s natural, off-the-cuff reactions, like the sheer joy of devouring mini vanilla and chocolate cupcakes, biting into a juicy burger or munching on a “perfect french fry.” You won’t see Levi grimace.

“We wanted to make this more about awareness of restaurants and not negative reviews,” said Tammy. “He can always find something positive to say.”

Those reviews have taken Levi to a variety of destinations, including Reangthai, Peterbroke Chocolatier, Voodoo Dog, Cupcakes by Heather and Bannerman Nutrition. At Max’s, he watched owner Max Winger make cheesesteaks, fries and shakes. At Momma P’s Ice Cream Truck, he took a tour of the inside of the mobile ice cream parlor.

When he was reviewing Volcano Hot Pot, Levi cheerfully plucked dishes off the conveyor belt.

review with these tips;

2. Levi enjoyed choosing his food from the belt as it went by.

3. The noodles are awesome!

4. Try the Thai Tea. It’s really good! (And maybe tastes like chocolate but he isn’t really sure.)”

Levi is sharpening his skills but he never turns critic when eating his mom’s cooking.

“He knows better than to do that,” Tammy said with a laugh.

Levi is enjoying his role as a critic, but he doesn’t see it as his eventual career.

“I want to be in the Coast Guard,” he said. “I want to fly helicopters to save people’s lives and bust drug dealers.”

For now,  Levi will use his spirited approach to make a mark close to home.

“We’re so proud of his accomplishments,” said Tammy. “It’s been a fun, family adventure, for sure.”

Where to find outdoor brunching in Tallahassee