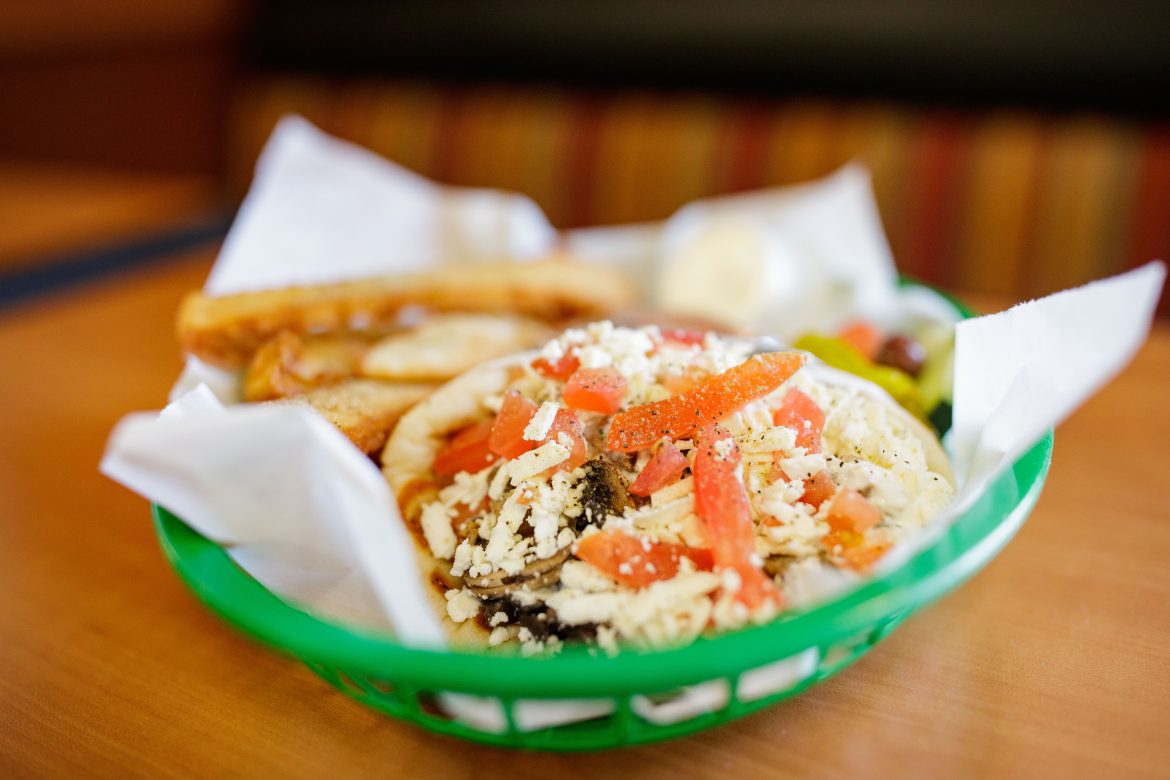 The Tallahassee Greek Food Festival, taking place Oct. 15-16, will feature dancing, live music and shopping. But for many of us, the highlight will be the homemade Greek fare.

Organizers of the festival, a cultural celebration to benefit the Holy Mother of God Greek Orthodox Church, note that many of the Greek classics served are from the old family recipes of church parishioners. You can tell.

You don’t have to wait all year to savor your favorite Hellenic dishes. Tallahassee offers several prime destinations, especially for gyros.

The gyro sandwich is a fluffy pita folded over marinated meat, traditionally a mix of lamb and beef that’s roasted upright on a vertical broiler or rotisserie and then sliced,  garnished with chopped tomatoes, lettuce, feta and tzatziki (a creamy cucumber-yogurt sauce). Better have lots of napkins handy.

While gyros originated centuries ago, they’ve become such a mainstream hit that Sept. 1 has been named National Gyros Day.

With the help of Tallahassee Table readers, here are some favorite stops for gyros in the capital city.

And oh, one tip: If you don’t how to pronounce gyros, remember the song “I Don’t Know How to Pronounce Gyro’’ from Jimmy Fallon and Luke Bryan: No more fear-o, you’re a hero, ’cause now I know it’s gyro (yee-roh).

Kosta’s Subs N Salads: Owner Joe Kosta has been making gyros and other Greek fare in this location for more than 20 years. Reader Sam Myrick raves about Kosta’s, saying “Best quality ingredients and taste and such personal, friendly service.” The restaurant, across from Proof Brewing Company, serves a traditional lamb-beef gyro, the seasoned meat mixture sliced from a cone, topped with feta, lettuce, tomatoes, onions and tzatziki sauce along with versions featuring chicken, shrimp and even a Philly steak plus salads and baklava. 1312 Adams St.; 850-222-0945.

Little Athens Gyro: For reader Jill Sandler, this small restaurant “has been wonderful for a long time.”  Owners George and Janette Ragheb, originally from Cairo, have in fact been cooking Greek and Mediterranean dishes in Tallahassee for 30 years. “I have probably made over a million gyros,” said George, who serves meat or chicken gyros. The restaurant is easy to miss,  tucked away on a side strip across from McDonald’s. Little Athens also serves soups and salads, hummus, grape leaves, entrees and baklava. Don’t miss their homemade honey cinnamon tea and lemonade.  666 W. Tennessee St.; 850-222-2231.

Pitaria: The local Greek/Mediterranean restaurant has combined its dine-in and delivery options in one new site on Apalachee Parkway. (The Tennessee location and Express have closed). Pitaria serves gyros with meat, chicken, turkey or falafels. For Tallahassee Table reader Crystal Bendz, “Pitaria is my fave.” The restaurant is known for its Greek and pita fries as well as vegetable platters. 1935 Apalachee Pkwy.  850-765-1171. Top photo by Alicia Devine / Tallahassee Democrat

Taziki’s Mediterranean Cafe: The Birmingham-based chain, which opened a branch in Tallahassee in 2016, features a list of gyro options, including chargrilled lamb, chicken, shrimp and veggie version as well as salads, vegetable plates and family meals. 216 S. Magnolia Dr.; 850-329-6056.

Yasou Cafe: George Maximos, originally from Cairo, specializes in dishes inspired by the Mediterranean region. He serves a traditional gyro in his Southwood venue along with chicken shawarma, falafels, bowls, salads, baba ghanoush and variations of Greek fries plus shrimp kebabs and salmon on his list of entrees along with a few vegan items. 3551 Blair Stone Rd.; 850-692-3415.